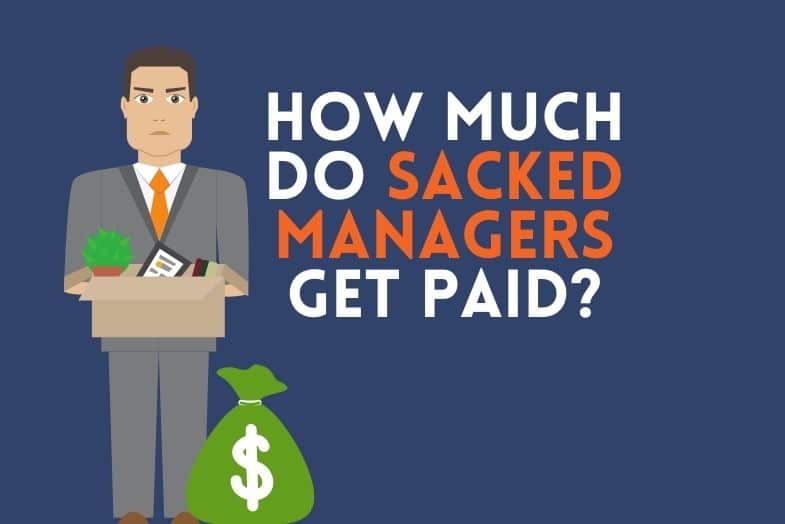 Some might argue that being a football manager is the toughest job in the world. Very few managers are immune to the ‘sack race’ and the majority of the time your project at a club ends in failure.

However, anyone who’s played Football Manager will know the need to manage just one more game is addictive. That is even more so when it comes to fully-fledged football managers.

Unlike your virtual football manager’s career, however, getting sacked in real life isn’t such a bad thing for the professionals. After all, they tend to be removed from a stressful working environment and get a multi-million-pound payoff to boot.

Seems like a pretty great job when you think of it like that! Let’s take a closer look at how much football managers get paid when they get sacked.

Do Football Managers Get Paid When Sacked?

Football managers sign contracts with clubs, often for several years at a time. If the club wishes to remove the manager from their position before the contract is up then compensation must be paid to the manager. For that reason, most football managers will get paid when they are sacked.

When David Moyes took over from Sir Alex Ferguson at Manchester United in 2013 he was given a bumper six-year contract. The risk didn’t pay off and after less than a season, Moyes was sacked by the Old Trafford club.

For his ‘failure’ Moyes was given £5.25 million in compensation from United. That’s not a bad way to leave a job at all. In fact, the Manchester Evening News reported in 2020 that Manchester United had spent £33 million on sacking its managers since Ferguson left his post.

Perhaps Manchester United should have taken a look at its history and backed the manager even though they were on the brink of getting the sack. Sir Alex Ferguson was almost sacked but turned things around at United and became the greatest of all time.

Do Football Managers Get Paid if They Resign?

Generally, a resigning manager won’t be paid compensation. It is the manager who is breaking the contract, so in theory, they would have to compensate the club. However, a manager is only likely to resign if the job isn’t going so well, so the club will probably agree to let them leave.

Managers resigning to coach another team is a different story. Teams trying to sign another team’s manager must compensate them before the move can take place.

For instance, when Real Madrid decided to bring Carlo Ancelotti in from Everton in 2021. It is understood that Everton chose not to stand in Ancelotti’s way and a compensation package was swiftly agreed between the two clubs.

This compensation allows the team losing its manager to go out and get a new coach from another team. They may also choose to bank that money and find a coach without a contract, just like Everton did following Ancelotti’s exit. Everton appointed Rafa Benitez, which was a controversial appointment following some unkind words he spoke about the Toffees when managing Liverpool.

What Happens if a Manager Leaves by Mutual Consent?

Some managers form a strong bond with the club they represent. If they decide they can take the club no further, and the board agrees, they may mutually consent to end the manager’s contract. Whether a manager gets paid in this situation is at the discretion of the club.

They may reward their manager for leaving early by offering some of the compensation as a goodwill gesture. Equally, if the manager truly loves the club they may decide to waive their compensation. This is particularly true if the club has fallen on hard times financially.

Roy Hodgson at Liverpool is the perfect example of a manager leaving their post by mutual consent. His ill-fated reign in charge of Liverpool didn’t go well for a variety of reasons.

Not only was the football played under Hodgson poor but Liverpool was in a very dark place financially. The team wasn’t up to the standards Liverpool fans expect but if they had played with some flair or style Hodgson may have been given longer.

A sign of Hodgson’s class as a person that he understood the job wasn’t right for him and didn’t want to cost the club anything with his resignation. Rafa Benitez also left Liverpool by mutual consent before Hodgson, perhaps due to his understanding of the club’s then-financial issues.

How Much Do Football Managers Get Paid When They Get Sacked?

The amount of compensation a football manager gets when sacked depends on their contract length and salary. A manager with many years remaining on an expensive contract will earn plenty of compensation. Managers with a short time remaining or a low salary will be compensated much less.

The compensation fee might also depend on the manager’s reputation and how skilled their agent is at negotiations. A manager with a history of success can expect to earn more from getting sacked than a rookie.

Especially as the experienced manager can point to their past success as a reason why they deserved to stay in the role or should have been given more time. A 2021 study, published by the Manchester Evening News, showcased that Jose Mourinho had earned total payouts of around £46.2 million from his last three Premier League sackings.

Why Do Football Managers Get Paid When Sacked?

The football manager is the single-most-important figure at a professional club. There is no point in having a squad filled with amazing talent if you can’t get them to play as a team. Because of their importance to their team’s success, the manager role comes at a premium.

Managers might be the reason why certain players joined a club, or their playstyle might have attracted new fans. Sure a star player ranks pretty highly, and a sugar daddy owner would be nice but the manager is the one who gets the team ticking.

This is especially true for the cream of the crop; we’re talking the Guardiolas, Klopps, Contes, and Zidanes of the coaching world. These superstar managers can transform a team just by their very presence and deserve to be paid handsomely for the jobs that they do.

They also know their job is high-risk and failure is a likely outcome. Relying on millionaire footballers to keep your job doesn’t always work out for managers.

Entering into a contract is a risk for both the manager and the football club. Both sides go into the appointment to succeed but things don’t always work out. If the club has offered its new manager a large contract, it may cost a lot to remove them from the position if things go badly.

For instance, Jose Mourinho didn’t come cheap for Tottenham Hotspur. His past success as a manager meant Tottenham was willing to take the risk in signing him to a large contract. Of course, things didn’t work out for them and Tottenham was left with the decision to give Mourinho his marching orders.

Reports claimed his compensation from Tottenham was approximately £16 million. However, Mourinho found himself in a job within a matter of months.

This reportedly saved Tottenham having to pay the full compensation but they are paying the difference between his new salary at Roma and his old one at Spurs. With Mourinho finding employment so quickly, it’s thought that Tottenham will save around £9 million from the original £16 million compensation package.