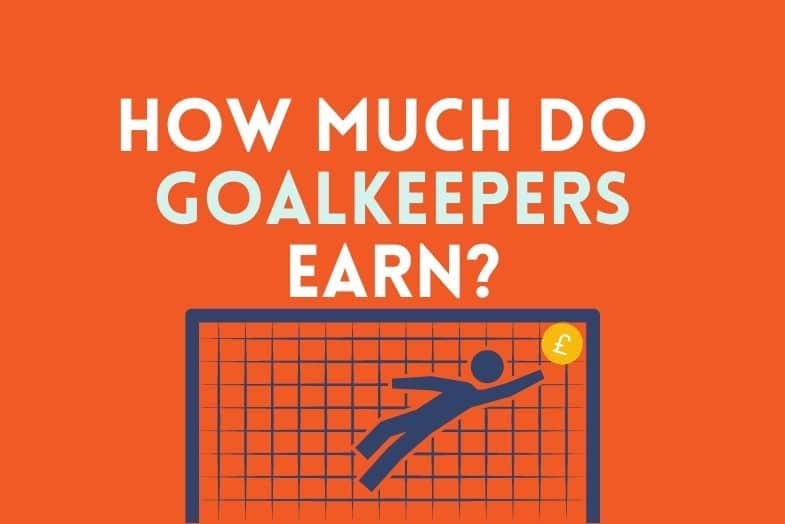 Typically in professional team sports, salaries can very much wider than regular jobs. The best players in the world have skills that just can’t be replicated. But some positions require more elite skillsets than others.

When it comes to professional sports salaries, many questions can come up. What league or sport pays the most? Or how much are Rugby players paid vs American footballers?

And are footballers paid weekly or monthly? How much do outfield players make? And what about goalkeepers?

How Much Do Goalkeepers Get Paid?

In the Premier League, the average Goalkeeper Salary for the 2021-22 season is just over £1.5 million per year. If we take away David de Gea’s extreme outlier of a salary at £19.5 million that number reduces the average salary of a goalkeeper to £1.29 million.

A quick look at goalkeeper salaries listed on spotrac shows the rapid dropoff in goalkeeper salaries when compared to oufielders. This can be attributed to the rare combination of the size and skill required. Whereas height can cover many goalkeeping flaws, the smallest goalkeepers rely much more on skill and athleticism.

Do Goalkeepers Get Paid Less?

In the Premier League, goalkeepers get paid less on average than outfielders. Forwards command the largest average salaries at £2.45 million, followed by midfielders at £2.25 million, defenders at £1.98 million and goalkeepers bringing up the rear at £1.5 million per year.

How Much Do Sub Goalkeepers Get Paid?

Like all squad players, sub goalkeepers are paid considerably less than their starting counterparts. In the premier league, substitute goalkeepers make less than half of the pay of starting goalkeeper. And typically, they pay closer to a quarter or less.

For example, the backup to Alisson at Liverpool, Adrian earns 3 million to his positional rival’s 7.8 million pounds per year. In a more extreme example, Thibaut Courtois earned £271,000 per week at Real Madrid in 2021. However, his backup Andriy Lunin earned a “meager” £6500 per week.

Funnily enough, for the 2021-2022 season, PSG is slated to pay their starting goalkeeper Donnarumma and backup keeper Keylor Navas that exact same salary of €230,000 per week. With the third-string keeper set to earn €38,000 per week! But when it comes to money and PSG, most rules can be thrown out the window!

Who is the Highest Paid Goalkeeper in the Premier League?

David de Gea is the highest-paid goalkeeper in the premier league. His salary is 19.5 million pounds for the 2021-2022 season. The next closest salary is Kepa Arrizabalaga of Chelsea FC at just over 8 million pounds per season.

Manchester United not only pay by far for the most expensive goalkeeper in the league. They also had the heftiest goalkeeping salary in all of the prem for 2020 coming in at an eye-watering weekly cost of £575,000. Chelsea is a distant second somewhere in the realm exceeding that of £200,000 per week.

Who is the Highest Paid Goalkeeper in the World?

In 2021, David de Gea is the only goalkeeper represented in the top ten highest-paid footballers in the world coming in at number nine.

Goalkeepers appear to be viewed as the lowest valued players in football leagues across the world. However, many of the best are paid just as well as top attackers. And despite their lower command of salary, goalkeepers can be argued to be more valuable due to the scarcity of elite keepers.