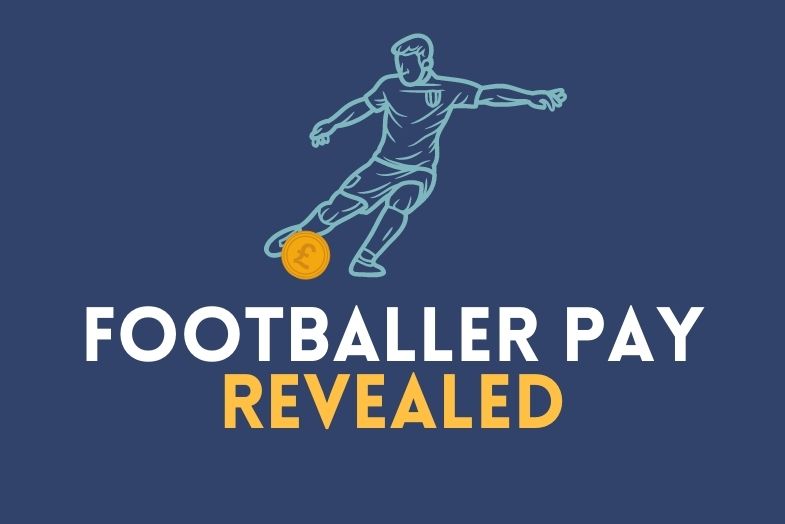 Today, leagues like the Premier League and La Liga are watched by millions of people all over the world. And thanks to technology, the globalization of European football will only continue to accelerate.

Many of us plebs squat in our humble flats streaming football matches on expensive sports channels. Some of us opt for less transactional (and legal means) but I digress. The Premier League brings in billions of dollars in revenue from TV money. Hell, even the Championship can make it rain from selling broadcasting rights and sponsorships.

But it does make one wonder, just how much are these gifted footballers earning these days?

How Much Do Premier League Players Make?

Premier League footballers can earn thousands of pounds per week or tens of millions of pounds per year. Player salaries depend on age, position, and other factors. In general, attacking players over 23 years old command the highest salaries.

As expected, attacking players typically earn the most money in the EPL. However, David de Gea earns over £200,000 per week and several other goalkeepers are well paid.

How Much Do Championship Players Make?

In the Championship, players can earn hundreds to thousands per week or up to hundreds of thousands per year. Top players at the bigger clubs will earn upwards of £5 million per year. Championship player wages depend on age, position, club budget, and whether or not the club was playing in the first division in the previous year.

In the English Championship, the average player salary is about £7,700 per week. This comes to a total of just over £400,000 per year. Average player salaries can vary widely depending on the club. This is mostly due to the promotion/relegation system and its attached parachute payments.

For example, for the 2020/21 season, Sheffield United, West Bromwich Albion, and Fulham were all relegated. These three clubs then posted average annual player salaries of £713,055, £598,315 and £1,164,360, which were all well above the league average. This deviation from the median was largely due to the clubs receiving their first set of parachute payments said to be well over £40 million each.

Similar to the Premier League, Championship players’ pay is based on the relative revenue of the league.

How Much Do League 1 Players Make?

The English League 1 brings in far less revenue than the Championship and the Premier League. The top players in the division can earn more than £5,000-20,000 per week but this is much more than most League 1 players earn. The average player earns around a couple thousand pounds per week.

In a leaked document by the Daily Mail, it was revealed that the average highest earner on each club was £4,753 per week or £247,188 per year.

In 2020, Sunderland’s Aiden McGeady and Lincoln City’s Morgan Rogers were joint top of the League 1 salary table. Both players earn £19,000 per week or about ten grand shy of a million pounds per year.

How Much Do League 2 Players Make?

Many English Football League 2 clubs are very secretive about their finances, including player wages. However, its average player salary is estimated to be between £1,300 and £1,500 per week or between £67,600 and £78,000 per year.

In the same leaked document by the Daily Mail, it was reported that the average top earner at each League 2 club was earning £114,020 per year.

How Much Do La Liga Players Make?

The average footballer salary in La Liga earns over £2 million per year. For U23 players, the average salary is £1.15 million while players 23-29 and 30-plus earned £1.9 million and £2.6million respectively.

Some footballers in Spain’s La Liga are among the best paid in the world. In 2019, Barcelona and Real Madrid boasted the top two highest average annual salaries per player of any sports club on the planet.

In the 2019/20 season, the Spanish first division was ranked 2nd in wage spending at €2.1 billion. Only the Premier League spent more on player wages at an eye-watering €3.8 billion.

How Much Do Bundesliga Players Make?

In the German Bundesliga, footballers earned an average salary of about £30,500 per week or nearly £1.6 million per year for the 2019/20 season. This average was inflated greatly by giants Bayern Munich and perpetual European competitors Borussia Dortmund.

How Much Do Serie A Players Make?

The Italian first division is always near the top of football leagues worldwide in wage spending. In the 2019/20 season, the average salary for Serie A players was just over £34,000 per week or nearly £1.8 million per year.

For the 2019/20 season, as per usual, Juventus was head and shoulders above the rest of the league with their wage bill. The club spent an annual average of £8,035,317 per player. The next closest Serie A clubs were Roma at £3.6 million and Inter at nearly £3.3 million per player per year.

Talk about feeling the pressure! With the Turin based clubs spending more than twice any other club, they should be winning the league every year!

How Much Do Ligue 1 Players Make?

In France’s top division, Ligue 1 players earned an average of £13,200 per week for the 2019/20 season. This comes out to an average annual salary of about £690,00 per player. The wage spending in Ligue 1 is much lower than that of other big European football leagues.

Ligue 1 salaries pale in comparison to the other 4 European football leagues that make up the “Big Five.” And if you remove impulse buyers, Paris Saint Germain, you could argue there is only a European “Big Four.”

Paris Saint Germain more than tripled the wage bill of any other club in Ligue 1 for the 2019/20 season. That bill? A cool £7.15 million of annual salary per player.

Monaco and Lyon were the next closest clubs in annual wage spending with averages of £2.3 million and £1.9 million per player respectively.

PSG also boast some of the most expensive footballers in the world. Their trinity of forwards in Lionel Messi, Neymar Jr, and Kylian Mbappé will earn £29.6 million, £26.3 million, and £15 million for the 2021/22 season.

How Much Do Footballers Earn?

Footballers are well paid to do what many do for a small fee every weekend at a local pitch (or maybe even for free down the park). But the game brings in astronomical amounts of money these days. And the players are paid accordingly.

The beautiful game continues to rise in popularity. Everyone involved can expect to be paid more. Owners, administrators, training staff and managers can all get their piece of the pie too. But players with the best gifts and talents will only see their earnings continue to rise disproportionately and in perpetuity