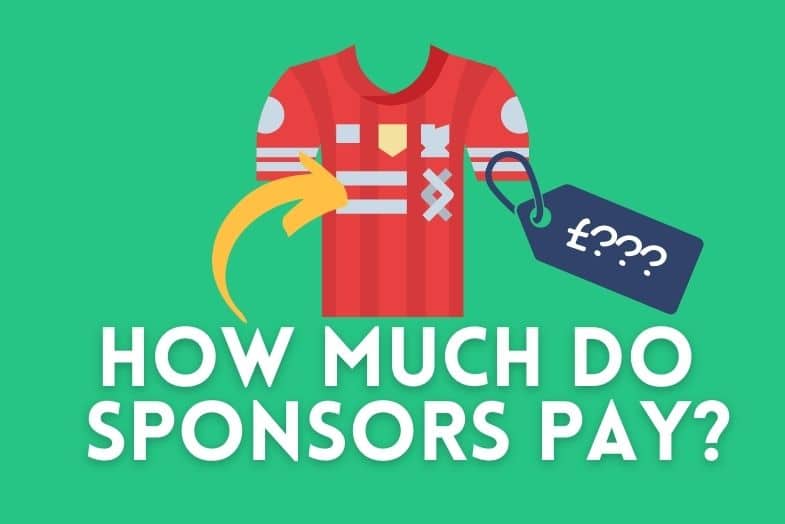 In the 1970’s, football witnessed what can be described as a true revolution, with clubs all across Europe beginning to display the names of their respective sponsors on their kits.

Of course the ‘purists’ didn’t enjoy the commercialization of their beloved sport, but nowadays, it’s almost impossible to imagine football without the names and logos that have became all-too-familiar to the fans.

So how does sponsorship work in football? What are the types of sponsors? How much does it cost to put a sponsor’s name on a football jersey? And how much do Premier League clubs make from their endorsement deals?

We’ll answer all these questions and more in our study below.

How Do Football Sponsors Work?

A sponsorship in football is an agreement between a club and a company/business that is looking to advertise itself. As per agreement, the company provides the club with funds, and in return, the latter displays the brand’s name or logo on the kits, inside the stadium or anywhere else across the club’s facilities.

At least this is how it all started, however, football sponsorship rapidly developed in the last few decades, with endorsement deals extending well-beyond the classic kit sponsor. Nowadays, brands’ names are all over the place, endorsing athletes, stadiums and even competitions (The Barclays Premier League, The Carabao Cup, etc…).

Let’s take a brief look at each type of sponsors as listed by Tsini.co.ke.

According to footballpink.net, the first sponsorship deal in Europe’s major leagues ensued in the Bundesliga back in 1973. Eintracht Braunschweig wanted to emblazon the logo of it’s new sponsor ‘Jaegermeister’ (a drink company), but the German federation refused their the idea. Therefore, the club went around the decision by replacing their it’s with the company’s logo.

Of course the sponsorship business made incredibly large leaps since then, becoming one of the three main sources of income for football clubs – the other two being TV rights and matchday income.

When it comes to the sponsorship money, Real Madrid remain at the top of the mountain. The Spanish giants earn up to 110 million pounds per season from their kit manufacturer Adidas which is the highest endorsement deal based on yearly revenue.

How Do Football Sponsors Make Money?

As the biggest sport on the globe, football provides sponsors with the opportunity to reach an audience which can’t be found elsewhere.

Moreover, the fans might inconspicuously grow fond of the brands associated with their favourite clubs. Thus, football allows the sponsor to become increasingly popular amongst the supporters, which subsequently translates into a bigger income.

In this paragraph we’ll try to figure out some of the pros and cons of football sponsorships from the company’s perspective.

Generally speaking, football sponsorships are not tax deductible. These accords are considered as commercial agreements, and thus, taxable by the state.

How Much Does Football Shirt Sponsorship Cost?

The cost of a football shirt sponsorship varies according to the size of the club and the league in which the team participates. For instance Chelsea receives £40m per year from their sponsor ‘Three’, while Aston Villa earns £6m on a yearly basis from ‘Cazoo’.

How Much Do Football Teams Make from Sponsorships?

Naturally, the sponsorship revenues for a football club is related to its status, prestige and recent results on the pitch.

So let’s have a closer look at the sponsorship income of the English Premier League and some of its biggest clubs.

How Much Do Premier League Sponsors Pay?

According to Besoccer, the English Premier League generates over £1 billion a year from 440 different endorsement deals. EPL dwarves the other major European leagues with its massive income from sponsors.

The Bundesliga comes in second place with 617 deals that generate £641.5 million and La Liga sits third with £592.4 million per season. The Serie A and the Ligue 1 land fourth and five respectively with £383.6 million and £312.4 million a year.

How Much Do Man Utd Make From Sponsors?

According to Statista, Man United gained £140.21 million from sponsors in 2021. However, this figure took a large hit to the Covid-19 pandemic, as the Red Devils had registered £182.71 million in the previous year.

How Much Do Liverpool Make From Sponsors?

In May 2021, Liverpool released it’s financial report for 2020/2021 campaign, announcing a commercial revenue worth £217.6m, which includes sponsorship money. However, the club didn’t announce the exact figure amassed from sponsorships.

As for the Reds’ main partners, their shirt sponsor ‘Standard Chartered’ provides them with £40m per year, while their kit supplier Nike pays them £30m per season.

How Much Do Man City Make From Sponsors?

Manchester City enjoys some of the most expensive sponsorship deals in the Premier League. The club’s main jersey sponsor ‘Etihad Airways’ injects £67.5m to the coffers every season, while the Cityzens’ kit manufacturer Puma provides them with another £65m per year.