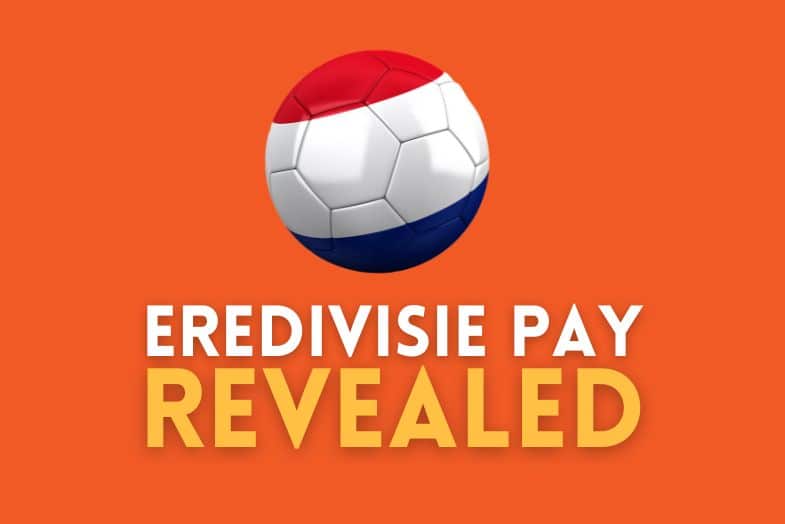 These days with the cost of living rising, one can’t help but wonder about the finances of world football. How much are clubs spending on players? What’s a salary cap?

And how much do continental leagues like the Bundesliga spend on players compared to the Premier League? Speaking of the continent, let’s examine the situation in the Netherlands.

The highest earner in the Dutch Eredivisie is Ajax’s Sébastien Haller on approximately £3.4m per year or £66,000 per week. His teammate, Dušan Tadić, is close behind earning just over £3m annually or about £58,000 per week.

Ajax players make up the top 5 highest-paid players in the Eredivisie as well as 7 out of the top 10. Rounding out the top 5 player salaries are Davy Klaassen (£2.8m per year), Steven Berghuis (£2.6m per year), and Ryan Gravenberch (£2.4m).

How Much Do Eredivisie Players Make?

Eredivisie footballers can earn anywhere from as little as £17,000 per year to as much as nearly £3.5m per year. The majority of the top earners play for Ajax and PSV as these clubs have much bigger budgets than most of the other Eredivisie clubs.

Ajax’s spending is nearly double that of the second most expensive club, PSV. The second-place spenders will be paying nearly £15.5m for annual player salaries or roughly £5.9m per player per year.

Feyenoord sits a distant third with 15 league titles. The ‘third’ club of the Eredivisie is also third in spending with an annual payroll of £9.4m for player salaries.

The average footballer in the Premiership earns more than ten times as much as their Dutch top-flight counterparts! Top earners in the Premier League are among the best-paid sports players in the world. Cristiano Ronaldo and Kevin De Bruyne are paid £26.8m and £20.8m per year respectively.

In contrast, top Eredivisie earners are paid no more than £3.5m annually with many in the top 10 hovering closer to £2.5m per year. This financial discrepancy makes Ajax’s run to the 2018/19 Champions League semi-final all the more impressive.

But that’s why we play the games!