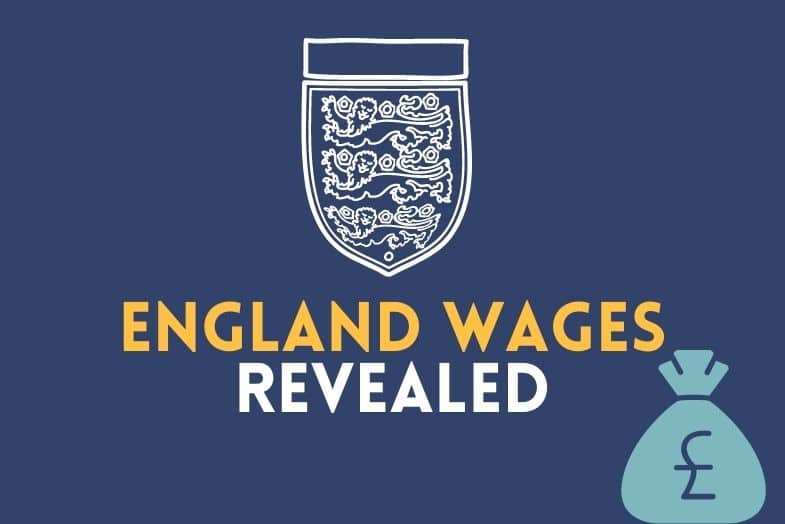 Seen as the ultimate symbol of pride in English football, to receive a call-up to play for the senior England national team allows players to represent their country on the international stage.

While players receive hefty wages from their domestic clubs on a yearly salary, the payment structure in international football is drastically different as England players receive a small percentage compared to their individual clubs.

But how much do England players get paid when making an appearance? And what do the players do with the money received for playing international football?

Join us as we go through the payment structure behind the England national team and how the finances are managed for international tournaments.

Do Players Get Paid for Playing for England?

England international players receive £2,000 per appearance for the Three Lions, a sum known as an ‘appearance fee’ that is paid by the Footballing Association (FA).

Since 2008, the FA have paid the £2,000 appearance fee to charities related to the NHS – the most recent charity has been NHS Heroes due to the COVID-19 pandemic.

Appearance fees are paid by the football federations of the respective countries, with the figure varying depending on the federation of the country. Not all football players are paid the same for international games, however, the England international players all receive an equal £2,000 each despite their domestic club contract differences.

As playing for the national team is traditionally a position of personal pride, players receive far less payment compared to their domestic club wages when playing for England. This makes it more simple for international players to donate their entire appearance fee to charity as it is still a minor fraction of what they already earn per week at their domestic club.

How Much Do England Players Get Paid?

Three Lions players currently receive £2,000 every time they represent their national team, either appearing as a starting player or substitute.

In terms of tournament prize money, players receive 40 percent of the figure whilst the governing body (Football Association) receives 60 percent. This is a result of a £175 million taxpayer-backed loan taken out by the FA to counter the financial impact of the pandemic. The FA reportedly plans to repay the loan before player bonuses are paid.

There is a maximum of £30 million that any one national side can earn from a tournament or competition, a scenario which would result in the winners of the tournament winning every game played.

Currently, the most capped England player still regularly involved in the squad is Manchester City forward, Raheem Sterling, who has received 72 caps for the Three Lions. Sterling has consequently earned £144,000 for charity from his performances in the England side.

Former England first-choice goalkeeper, Joe Hart, is still the most capped player in England eligible for selection with 75 caps. Hart has earned £150,000 for charity with his last appearance taking place in 2020.

Alongside the £2,000 that players receive for an international appearance, they also receive a figure from various endorsements and sponsorships depending on the player and outlines of their deals with the company they are signed to.

England captain, Harry Kane, receives payment of £2 million per year from endorsements in addition to the £2,000 from an international appearance. An endorsement deal can rise by as much as 30 percent if the player is a member of the final 23 player squad for a European Championship or World Cup final.

In order to receive these additional endorsement payments, players must perform certain acts when playing for the international squad. These can include wearing the training and playing kit and potentially endorsing commercial partners of the international team when away on international duty.

Further payment can be earned through lucrative boot endorsement deals with many of England’s players sponsored by companies such as Nike. Kane, who had the Nike Hypervenom 3 boots launched in his honour after scoring 100 Premier League goals, is one of the highest earners under sponsorship from Nike.

Do England Players Get Bonuses?

These player bonuses differ greatly between tournaments such as the World Cup and the European Championships due to the financial input from football associations UEFA and FIFA.

The men’s England team earned £217,000 for reaching the semi-finals of the FIFA 2018 World Cup whereas the prize sum for winning the tournament that year was roughly £8 million.

Having reached the semi-finals, the England national team received a £65,000 bonus for their victory in the quarter-finals which is divided between the FA and players.

This sum is considerably different from the UEFA European Championships, with the bonus fund being £3million more than the equivalent for winning the World Cup three years ago, while UEFA’s prize fund has increased by 24 percent in total since Euro 2016.

If the England team had won the 2020 European Championship final against Italy, they would’ve received a £12 million bonus split between the players. This meant that the personal win bonus for each England player would’ve been £460,000.

As the England team progresses further through the stages of the tournament, each player can accumulate more money to be donated to charity. With Gareth Southgate’s side reaching the final of the 2020 European Championship, each player who played in every fixture earned up to £14,000 for charity.

These donations began in 2007 as the Football Association decided to distribute the bonuses to charities such as the NHS and most recently NHS Heroes following the COVID-19 pandemic.

Despite finishing runners-up in the 2020 Euro final, England received £2.3 million which was subsequently donated to NHS Heroes. In addition to these donations, the #PlayersTogether initiative was created by the FA to ensure that all England player international match bonuses would be donated to NHS charities.