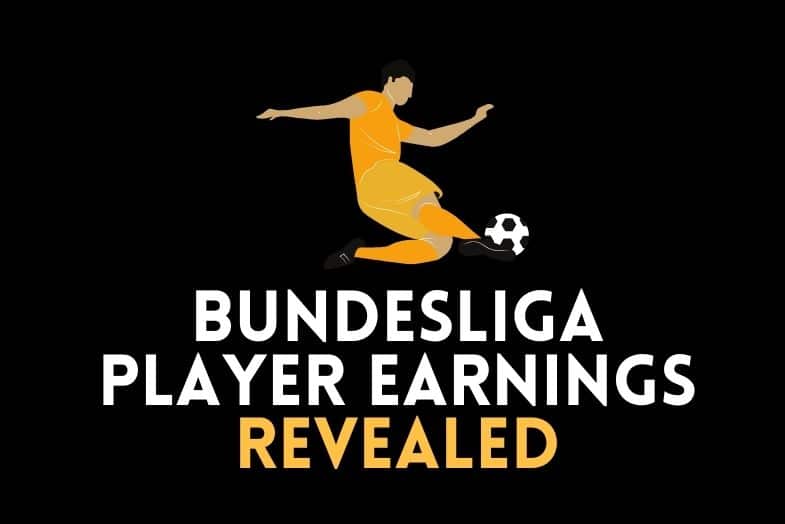 European football has spent the past several decades evolving into the plaything of billionaire magnates and sovereign governments. Perhaps this is none more obvious than the examples set by teams like Manchester City and PSG.

This has led to ownership groups conducting exorbitant spending habits, that in real-world terms, are just bad business.

In Germany, they have a different business model for football. They carved out a much more sustainable path for the financial health of their football clubs. This includes the 50+1 rule which mostly prevents a single entity from having too much control.

In fact, unlike most European leagues, the Bundesliga has managed to spend less than half of its revenue on player wages. They don’t have a salary cap; however, so how much do their footballers get paid?

Top earners in the German Bundesliga earn well over £200,000 per week. Robert Lewandowski is the highest-paid player in the league earning over £367,000 per week or more than £19m annually. Manuel Neuer, Thomas Müller, and Leroy Sané are all tied for second earning £16.6m per year.

For the 2021/22 season, the top ten highest-paid players in the Bundesliga all play for Bayern Munich. This shows just how much financial disparity there is between the Munich giants and the rest of the division.

The highest-paid non-Bayern players are rival Borussia Dortmund’s Marco Reus and Mats Hummels. Reus earns over £175,000 per week or £9.1m annually while Hummels is close behind receiving nearly £160,000 per week or £8.3m annually.

In the Bundesliga during the 2019/20 season, it was found that forwards over the age of 30 were by far the highest-paid players on average. The magisterial Lewandowski leads the way of course but his colleagues were forced to live off of just £72,500 per week or nearly £3.8m annually.

The average player salary in the Bundesliga is just over £2m annually or nearly £40,000 per week.

In the 2019/20 season, the Bundesliga players were the 9th highest paid among all sports leagues around the globe. The National Basketball Association (NBA) was number one with an average player salary of £6.5m annually.

In the same season, the German first division was 4th in world football when it comes to player salaries. The Premier League was top with La Liga and Serie A ranking in second and third place respectively.

How Much Do Bundesliga Players Make?

Player salaries in the Bundesliga can vary widely depending on age, skill level, and position. While the average salary is over £2m per year, the top ten highest-paid players all earn more than £11m annually. U23 players earn on average, only £400,000 per year.

Bundesliga players are some of the highest-paid footballers in the world with an average salary of over £2m per year or £40,000 per week. This is still significantly lower than the average Premier League salary which is more than £3m annually or just over £60,000 per week.

The Premier League is still top when it comes to football financials. This includes bringing in the most revenue which in turn is reflected in the highest average player salaries.