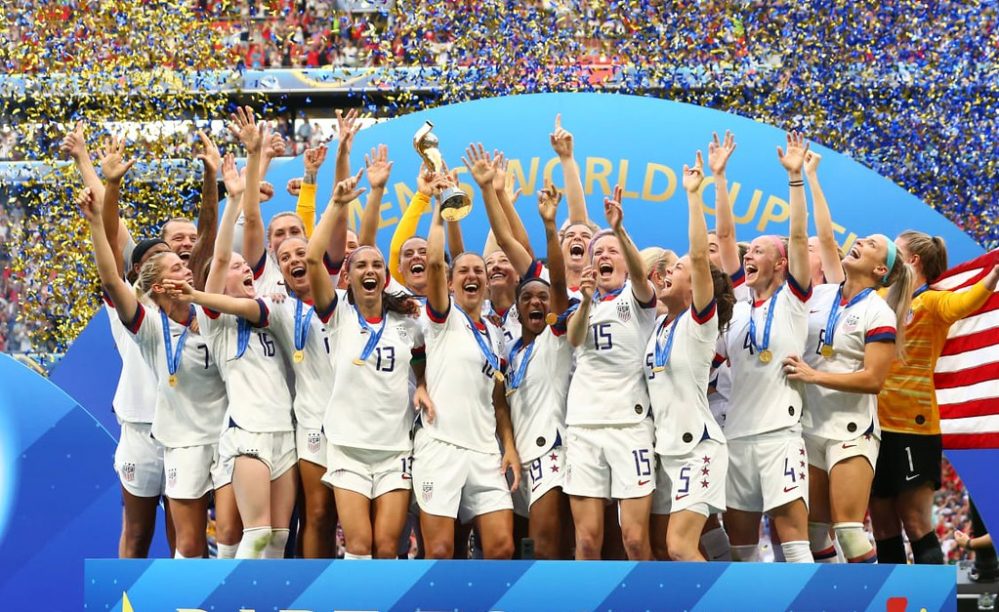 You’re probably aware by now of the recent and heart-warming rise to prominence of women’s football (if not, you’re in luck – we wrote about it a while ago here!).

But there is evidently still a fair amount of disparity between it and its male counterpart in terms of pay rates. So, just how much do women’s soccer players make usually? How much do female footballers get paid in the USA compared to the UK? And are female footballers professional?

Let’s take a look at this and much more below…

Formed in 2010, the WSL is the top tier of the English game in women’s football; their Premier League, if you like.

Arsenal and Chelsea both have the most WSL titles with three each, while Liverpool and Manchester City have won it twice and once respectively.

Is the Women’s Super League Professional?

Yes; the WSL became a fully professional league for the first time in 2018-19, when 11 teams competed in it.

Teams had to re-apply for their licence to earn their place in the WSL, including offering their players a minimum of a 16-hour-a-week contract and forming a youth academy.

As a consequence of not receiving their licence, Sunderland were demoted to tier three in the women’s football pyramid, while Brighton and West Ham the WSL.

Now that they are all professional, yes, all WSL players get paid.

It is a far cry from its early days, certainly, when only a ‘handful’ of WSL players were full-time and the top four players on each team paid an annual salary of more than £20,000.

How Much Do Women’s Super League Players Earn?

As of April 2020, the average wage for a WSL player was to be less than £35,000 a year. Which may sound a decent salary, but still pales in comparison to virtually any footballer in the top tier of the English men’s game, of course.

The NWSL is the top tier of the American game in women’s football, succeeding Women’s Professional Soccer in 2012 and starting play in 2013.

Though it initially comprised only eight teams, ten now compete in it – at the end of its April-to-November season, the top team is awarded the NWSL Shield, while the six highest sides then qualify for the playoffs, with the top two earning a first round bye.

Is the NWSL Professional?

Yes, the NWSL is and always has been a professional women’s football league.

When first formed, national team players’ wages were agreed to be subsidised by US Soccer, the Canadian Soccer Association (CSA) and the Mexican Football Federation (FMF) to help the clubs build stronger squads while staying within the limits of the salary cap.

How Much Do NWSL Get Paid?

How Much Do Female Footballers Get Paid (UK vs USA)?

If these numbers are correct, then the average wage in America’s highest tier is slightly higher than that in England’s top-flight.

Those representing the US Women’s National Team (USWNT) also make a fair amount more than that, too. Per ESPN, Contracted players have a base annual pay of $100,000, and there are also at least 22 players allocated to National Women’s Soccer League teams.

Representing the England women’s team, meanwhile, earns you a match fee of approximately £2,000, though some women, like the men (who earn the same amount in match fees), donate this to charity.

Who is the Highest-Paid Female Footballer?

American veteran Carli Lloyd, who can play either in midfield or as a forward, was named the highest-paid female footballer in the world in 2021.

The NJ/NY Gotham FC (formerly known as Sky Blue FC) player reportedly earned $518,000 in 2020, putting her out in front ahead of the likes of Sam Kerr, Alex Morgan and Megan Rapinoe.

That said, her annual wage is still more than 175 times less than that of Lionel Messi...

Why are Female Footballers Paid Less?

A number of reasons, but the overarching fact is that, in terms of its size, it is still dwarfed by that of the men’s game.

In France, for instance, as recently as 2018, women made up between only seven to eight per cent of all players with about 150,000 registered members – although it’s worth pointing out that this number had more than quadrupled in the last 20 years, so clearly it’s growing exponentially.

And while 28 USWNT players filed a lawsuit over equal pay in 2019, official governing body US Soccer found that the job of an international male footballer ‘requires a higher level of skill based on speed and strength’ than their female counterparts.

In September 2020, meanwhile, following the reports that England’s male and female players are paid the same in match fees, Manchester United boss Casey Stoney welcomed the news, but admitted the women’s game cannot yet justify parity in terms of pay rates with men.

“I’m a realist in terms of equality,” Stone said. “I think you get paid the same when you bring in the same revenue.

“I think until we get more people in the stands, more revenue coming in, more commercial money coming in, then we can start talking about equal pay.

“We need to invest more money in our marketing. Get more people in the ground, making sure the game is more visible.

“We need to get more commercial revenue back in before we start talking about paying players more towards the equivalent of the men.”
Yet is the revenue argument quite so cut-and-dried as this? Yes, in England, the WSL makes a fraction in revenue of the billions raked in by the Premier League, and can’t yet compete with its colossal prize money, either. But in America, for instance, the women’s national team generated more from ticket sales than the men’s side between 2016 and 2018.

Will Women’s Football Ever Be as Popular as Men’s?

Maybe. But if not, it certainly won’t be for the want of trying.

Next season, for example, will be the first of the WSL’s three-year £24 million TV deal with Sky Sports and the BBC, while their current £10 million contract with sponsors Barclays is set to significantly increase.

Comparing it to the men’s game is at once an obvious yet pointless exercise – men’s football has been an established part of the sporting scene for more than a century, yet while women’s football may have been huge during World War One, it was banned by the Football Association from 1921 to 1971. So, the amount of catching up it has to do is, inevitably, enormous.

Whether you agree with equality in pay rates or not, though, perhaps we should just enjoy women’s football for what it is – a sport ever-increasing in popularity and quality – rather than constant trite comparison to the male equivalent.