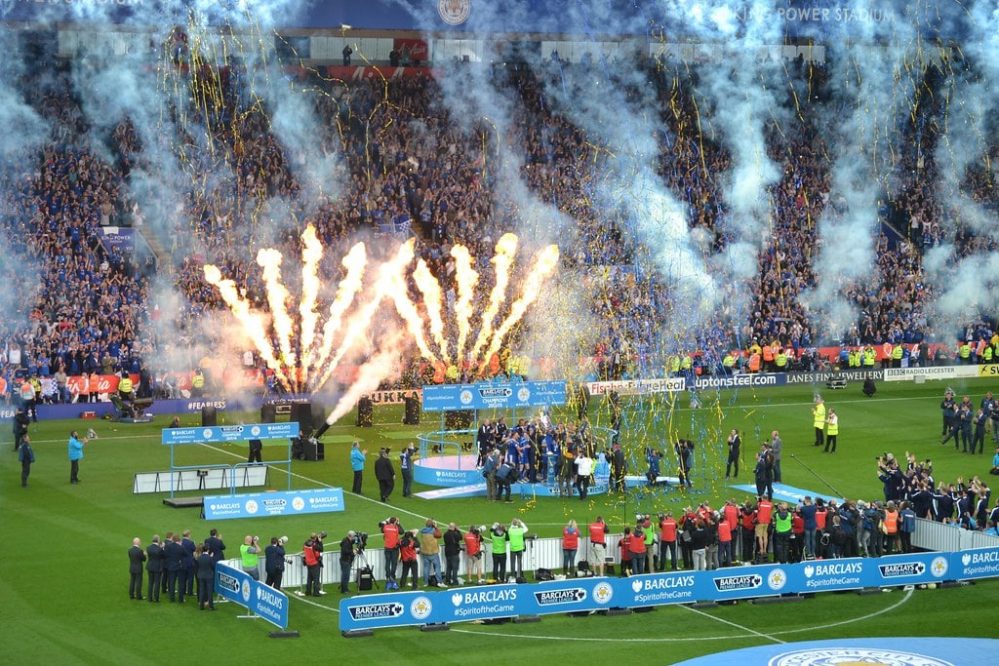 It’s often described as the best and hardest league in the world, but have you ever wondered what the average points total of the seven Premier League champions? What is the lowest number of points to win the Premier League in its near-30-year history?

We’ll answer both of these questions and more below:

Here’s a chart of the points haul of each Premier League winner since its inaugural season in 1992-93.

Note, the first three campaigns consisted of 22 teams, whereas since 1995-96 it has been comprised of 20 clubs instead.

In a 38-game season, the team to win the Premier League each season picks up 87 points, on average. The lowest winning points total was 75 points (Manchester United in 1996/97) and the highest winning total was Manchester City’s 100 points in 2017/18.

Based on the points totals amassed by the Premier League winners in each of its 29 seasons, the average sum needed to become champions of England is 87 (rounded to the nearest whole number).

If we exclude the first three 22-team seasons, the average is still 87 points (to the nearest whole number).

Yet surprisingly, this figure has been either equalled or surpassed in more than half of the Premier League campaigns (17) by the winners.

The lowest points total ever earned to win the Premier League was 75 by Manchester United in 1996-97, the second of the 20-team campaigns.

They only needed 69, though, as Newcastle and Arsenal in second and third respectively only managed 68 each.

The two seasons which followed 1996-97 also served up the second- and third-lowest points totals ever to win a Premier League: Arsenal won it in 1997-98 with 78, pipping United to the post by a point, while United regained the title by the same narrow margin with 79 in 1998-99.

These three campaigns are the only times the Premier League champion has not accrued at least 80 points in their title-winning seasons.

The biggest points total ever reached in Premier League history is 100 by Manchester City in 2017-18, the only side since the league’s inception to reach a three-digit figure.

Pep Guardiola’s men then regained the title the following season with what was then the second-highest total, 98, as they edged out Liverpool who finished with 97. Though, the Reds at least eclipsed them a year later with 99.

These make up the four highest totals in Premier League history; indeed, Liverpool’s 97 in 2018-19 may have only earned them the runner-up prize, but it would have been enough to win the title in any other season besides 2017-18 (when City hit 100).

Interestingly, these figures – and Chelsea’s impressive 93 in 2016-17 – were all preceded by Leicester’s shock title win in 2015-16, when 81 points was enough to lead the Foxes to an unprecedented Premier League crown (by a gaping ten-point margin, too).

That year, Chelsea finished tenth, Liverpool eighth and City fourth. It’s almost as if, after such crushing embarrassment that year, these clubs with the biggest financial muscle doubled down on ensuring it never happened again…

What’s the Maximum Points You Can Get in the Premier League?

Three points for a win, 38 games – a perfect Premier League campaign will earn you 114 points.

Which rather puts into context the scale of the achievements of both City and Liverpool in those three record-breaking seasons; indeed, out of 114 games, the Premier League champions between 2018 and 2020 won a combined 96 matches and lost merely nine.

How Many Points Does a Team Need to Win the Premier League?

Let’s finish off by looking at the minimum points a team needed to win the Premier League in each season, by looking at how many the runners-up finished on:

The average points total for a Premier League runner-up across all 29 seasons is 80, as it is when excluding the first three 22-team campaigns, too.

Only once has the Premier League title been won on goal difference; in 2011-12, when ‘that’ Sergio Aguero goal took Man City level on 89 points with neighbours United, but edged them out thanks to their +64 goal difference compared to United’s +56.

Conversely, the biggest gap between first and second also involved City and United; while City reached 100 points in 2017-18, United finished runner-up that year with 81 under Jose Mourinho – a decent return, but still forming a 19-point margin, the biggest of the top two in Premier League history.