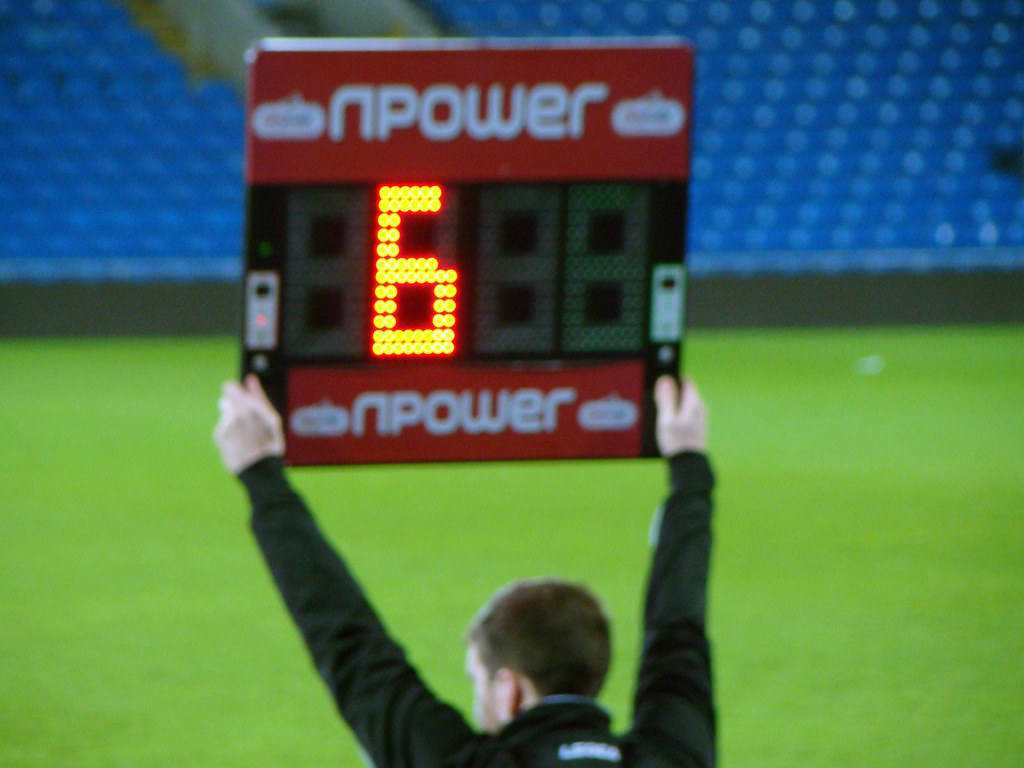 September 2010. 12-year-old me has gone from slumping in my seat miserably to frantically jumping around ecstatically, as my beloved Everton score two goals in stoppage time to draw 3-3 with eventual Premier League champions Manchester United.

Fast-forward to December 2012, as history repeats itself as the Blues enter the 90-minute mark 1-0 down to Tottenham, only to emerge 2-1 winners. Pity the friend of my grandad, who took the clock turning 90 as his cue to exit that day.

In a sport where narratives can be ripped up and rewritten in split-seconds and moods can swing from extremity to the other with just a kick of a ball, injury time is not just a few superfluous minutes. It can make an intangible difference to the course of football matches.

But how is injury time calculated in football? Is stoppage time accurate? Here, we’ll hopefully give you a better understanding of exactly what it is and how stoppage time works:

What is Injury Time in Football?

Injury time, also known as stoppage, additional or added time, is a period of extra playing time decided by a referee to make up for time lost in each half due to goals, substitutions, injuries or whatever else held up play for a significant amount of time.

As a general rule, the first half will consist of somewhere between no stoppage time to two minutes, whereas the second will often see a minimum of four added minutes. The referee decides how much time is added on, but the fourth official reveals it to the crowd via his or her electronic board.

Don’t get it confused with ‘extra time’, which is when an extra half-hour of football is played to decide a cup/play-off match which has been drawn after 90 minutes (plus injury time).

When Was Stoppage Time Introduced in Football?

If you’re wondering ‘When did stoppage time start?’, well, the first instance of injury time being used in football was in 1891 during a match between Stoke and Aston Villa.

Villa led with just two minutes left when Stoke were awarded a penalty. A Villa player proceeded to kick the ball out of the ground (presumably annoyed at his or his team-mate’s faux pas or being devilishly cunning), and by the time the ball was recovered, the 90 minutes had passed. Hard luck, Potters.

Though it did a fat lot of good for Stoke that day, it did help in creating football history and setting a precedent right up to the present day. Indeed, it was later decided that a game could not finish with a penalty kick waiting to be taken, and time could be added on in such instances.

How is Stoppage Time Calculated in Football?

Essentially, the referee tots up the amount of wasted time in each half and adds it on. As for who decides stoppage time in football, it’s certainly at his discretion, but he needs the help of his matchday colleagues.

Referees never stop their watch during a half of football, so one of his assistants and the fourth official will keep track of how much time it takes for a physio to treat an injured player, for example. The fourth official notes down every stoppage in play in a match, which can then be presented to staff of either team if they so wish.

But as a general rule, the referee decides for himself when a stoppage in play is worth adding on. If the ball goes out for a throw-in for a few seconds, or even a goal celebration takes a short amount of time, this likely won’t be added on. But for substitutions (usually 30 seconds), injuries or cases of time-wasting, it all depends on the individual scenario.

The ref then lets the fourth official know how much time add to on about two minutes before we reach the end of regulation time in each half, and can blow for full-time at any juncture (case in point: when Martin Atkinson blew up with Everton on the attack again in the 3-3 draw with United looking for a stunning winner. Much to my and manager David Moyes’ annoyance).

Probably not, in truth. Though, if referees were to be more pedantic about compensating for lost time, we could well end up with in excess of ten minutes of added time. Not ideal if you’re a supporter in a rush to make the last train home, for example.

Research carried out by FiveThirtyEight during the 2018 World Cup found that the average added time in all 32 group games was six minutes and 59 seconds, when it should been just past the 13-minute mark. The clash between Iran and Portugal, they say, should have seen 14 minutes of added time over the two halves when, in fact, it only saw a total of six.

Likewise, a BBC investigation in 2017 found that, in the first two weeks of the 2017-18 Premier League season, no game saw the ball in play for more than 61 minutes; Burnley vs West Brom saw just 47 minutes and 40 seconds in that regard. That’s almost a whole half of non-football.

But then again, the amount of time officially added on is only the minimum that will be played, so as mentioned earlier, the referee can call time on the match whenever he sees fit.

It appears this accolade is held by the Carabao Cup third round tie between Burton Albion and Bournemouth in September 2019.

The Brewers upset the Cherries to win 2-0 that night, but celebrations were severely delayed to the floodlights of their ground, the Pirelli Stadium, failing on three separate occasions.

A total of 28 minutes of stoppage time was given by John Busby, who initially halted the game after the third failure, only to be told by the EFL that a match can only be called off if there is a total delay of at least 30 minutes. So close and yet so far…

How Do Other Sports Calculate Injury Time?

Well, in rugby union, there is none. Matches last a duration of two 40-minute halves and no longer. There used to be, like in New Zealand’s last-gasp 39-35 victory over Australia in 2000 (AKA ‘The Greatest Game of Rugby Ever Played), but it was scrapped shortly after.

Likewise in rugby league, the end of each half is marked by a piercing horn sound, so it is completely out of the referee’s hands in this sport.

Other sports are arguably more precise. In basketball, the clock stops whenever the ball goes out of play, there is a foul, free throws are shot, and during time-outs. Similarly, ice hockey matches (three 20-minute periods) typically only have the clock running when the puck is in play.

It’s not too different in American football, either. Divided into into either two halves of 30 minutes each or four quarters of 15 each, the length of the game is measured by the game clock. An operator will stop the clock for a ‘timeout’ if the ball is not in play or a player is injured, for example.

On average, then, an NFL game ends up lasting more than three hours, primarily because it’s judged by vastly different rules to what determines stoppage time in ‘soccer’.

Should Football Change How It Is Timed?

There’s certainly an element of ambiguity about allocation of stoppage time in football, but aren’t most things that are as subjective as this?

Implementing methods akin to those used in basketball, ice hockey or American football may seem more water-tight – what is injury time in ‘soccer’ doing to make sure it’s just as fair? Not much, perhaps, but it might also make watching a football match a far lengthier, more arduous ordeal. Make no mistake, it would butcher the momentum.

So, while it’s not always ideal, and there will always be one fan, player or manager with a gripe about it when their team are short-changed by the amount of injury time, it’s probably the best balance of keeping the game flowing and keeping the game fair as you are likely to get.