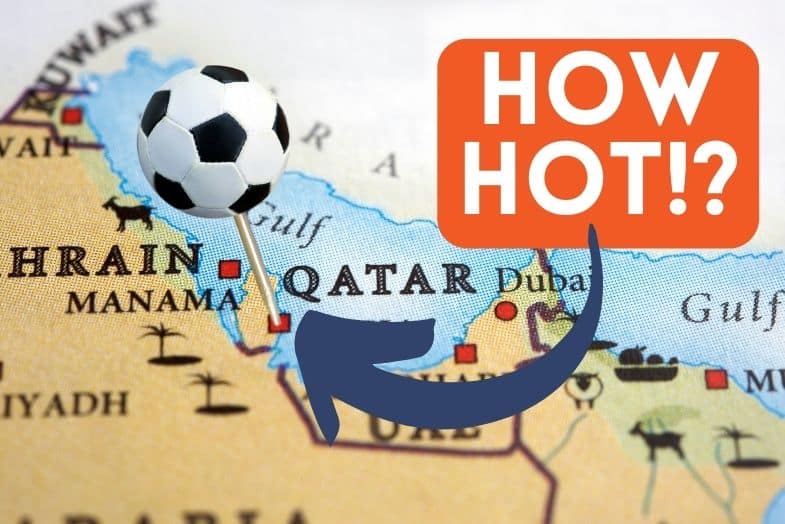 In December 2010, FIFA sent shockwaves through the world of sport when it allocated the 2022 World Cup to the geographically-tiny nation of Qatar at the expense of the United States and Australia amongst others.

But while the size of the country was a concern in itself, it paled in comparison to other more disturbing factors, especially Qatar’s climate.

Eventually, FIFA decided to make a radical change to the tournament that features the most iconic trophy in sport, moving the World Cup from its traditional summer timing to an unconventional period between November and December, subsequently forcing club football into a mid-season halt.

So how hot will it be in Qatar come November? And how do the forecasted temperatures compare to the previous editions of the World Cup?

Why is the World Cup in Winter?

The World Cup’s organisers decided to move Qatar 2022 to November and December in order to avoid the extremely high temperatures that the host nation endures in the summer.

In July, the temperature in the country can even reach 50 °C (122 °F) during the day, putting the players’ health at risk. During this month, the daily average is 36.1 °C (97 °F). That is a far from ideal climate for some of the world’s best-paid athletes.

While the organisers initially claimed that the heat won’t be an issue for the competition, as they would adopt a cooling system that lowers the temperature inside their technologically advanced stadiums, changing the timing was eventually deemed as a more practical solution.

How Hot is Qatar in November?

Aside from the scorching record high, the temperatures appear to be decent enough to provide playable conditions – especially when compared to the country’s July climate. Moreover, it should be noted that the majority of the fixtures will kick off between the afternoon and the evening, which is a more favorable timing due to the lower degrees.

Will Qatar World Cup Be Too Hot?

Despite moving the tournament to November, Qatar 2022 is still expected to deliver some of the highest temperatures witnessed in World Cup history.

While the previous editions used to witnessed some occasionally hot temperatures that exceed the normal, the temperatures in Qatar will most likely be more consistent due to the country’s small size.