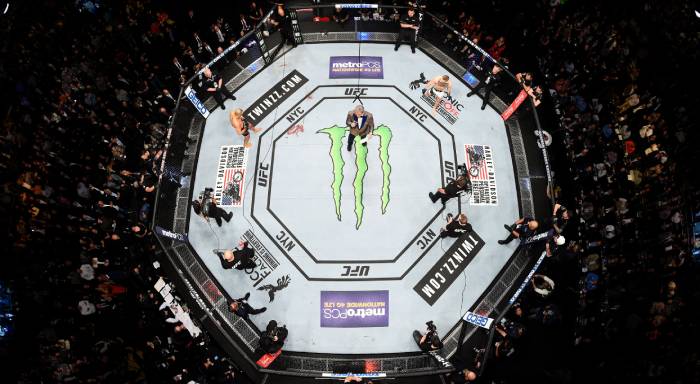 While the Octagon arena in Ultimate Fighting Championship (UFC) typically has a 30-foot diameter, this has been known to vary from venue to venue, too – take the UFC APEX in Las Vegas, Nevada, for instance, which measures at just 25 feet.

“UFC operations staff knows it can put a 30ft cage in the Apex. The UFC prefers the smaller 25ft cage because they feel it creates more action,” said senior referee John McCarthy on Twitter in May 2020.

“Fighters tend to like the 30ft cage because of the space. 25 ft cage came from WEC (World Extreme Cagefighting) days and Joe Silva loved it. It’s just preference,” he added.

Has McCarthy got a point? Does Octagon size really make that much of a difference to UFC fights? And how high is the Octagon, and what is the Octagon made of? All of this and more will be explored below:

What Size Is The Octagon Normally?

As we mentioned at first, as a general rule, the interior of the Octagon will measure 30 feet in diameter, with its exterior slightly larger at 38 feet.

It is also normally comprised of a four-foot-wide, four-foot-high walkway and two entrance gates on opposite sides measuring three feet wide and five feet high.

Meanwhile, its 3ft 2in-high floor is padded with plastic, as is the six-foot-high fence that encloses the fighters, eradicating the risk of either of them falling out of the arena.

How Big/Small Are Some Octagons?

Vegas’ aforementioned 25-foot UFC APEX arena is not the only one of its kind, though it is generally one or the other when it comes to Octagon size.

Not only is it five feet smaller than the more traditional Octagon, but also measures roughly 518 square feet, compared to approximately 746 square feet taken up by its bigger counterpart.

That means the ‘full-size’ Octagon is about 20 per cent wider and 44 per cent larger than the smaller version.

The smaller arena size was recently used in the first UFC event to take place at the APEX; the 11-event ESPN 9 card headlined by the welterweight clash between Tyron Woodley and Gilbert Burns in May.

Does The Smaller Octagon Make a Difference?

It certainly can do. For a start, of the UFC fights held the 30-foot Octagon, the finish rate is just less than 50 per cent, compared to roughly 60 per cent of the clashes in the 25-foot arena (albeit from a smaller sample size, of course).

The 25-foot cage gives the fighters less room to manoeuvre, placing greater emphasis on instinct and reactions. That, in turn, may put competitors who prefer to counter at a disadvantage, as well as those of a larger build, but may also work in the favour those who relish defending takedowns as they can use the smaller arena size to their advantage.

A smaller Octagon can also mean an increase in action. On average, fighters throw roughly 20 per cent more strikes in the 25-footer, which have helped make contests maintain momentum and not drop off in quality. Watching someone lie on top of their opponent for minutes on end, for instance, is neither particularly ‘fan-friendly’ or entertaining.

There may also be a financial incentive for the UFC in using the smaller arena; not only could it generate more revenue if the fights are more thrilling as a result, but it could potentially add extra seating space closer to the Octagon. Those eye-watering profit margins could soon extend even further.