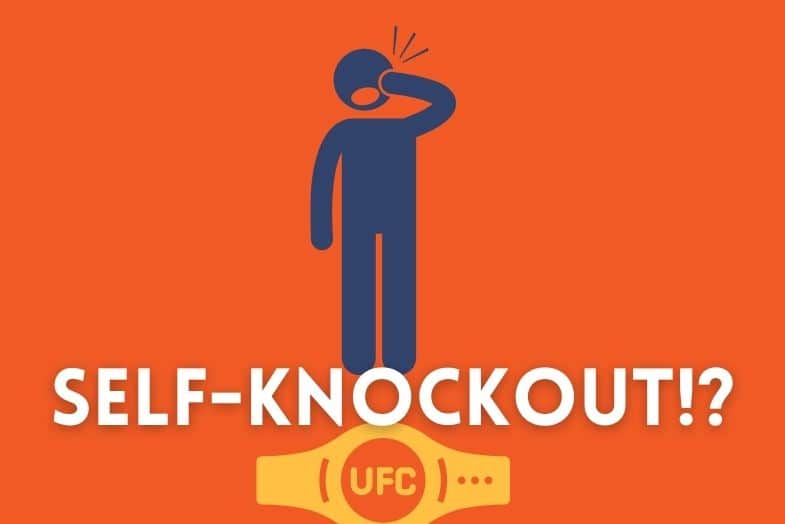 The super-competitive world of mixed martial arts (MMA) is one that few people dare to enter. And for good reason; most fighters end up in the hospital after their fights, win or lose. While there are rules that reduce the risk, and weight classes that are determined by how much you weigh, fighters can mostly expect to take damage from their opponents.

That’s not always the case, however, and sometimes the fighters are a danger to themselves. This could be through a self-inflicted injury like slipping and spraining an ankle, blowing out a knee, or even breaking a limb attacking their opponent.

There is a risk vs reward aspect of fighting in the UFC but what most fighters don’t expect is to knock themselves out. As ridiculous as it sounds, a UFC fighter couldn’t have knocked themselves out in the ring before, could they?

Has Anyone Knocked Themselves out in UFC?

The aim of the game in MMA is to hurt your opponent. However, while you have to be aware of how dangerous your opponent is, sometimes you can do more damage to yourself than they can. There have been incidents in the UFC where fighters have suffered the humiliation of knocking themselves out.

Jamie Varner had a mixed cage fighting career but he managed to retire with 21 wins versus 11 loses. One of those losses came in the UFC after he knocked himself out while trying a double arm takedown. Varner landed on his head and his opponent, Drew Dober, finished the fight via rear-naked choke.

The fight took place at UFC on Fox 13 in December 2014. Varner’s lightweight tussle with Dober was on the preliminary card and it was a momentous occasion for the fighter. Immediately after the fight, Varner announced he would be retiring from mixed martial arts competition after a well-travelled career in the cage.

Dylan Andrews made his dreams come true by fighting in the UFC, however, it soon turned into a nightmare. Andrews was matched up against Sam Alvey in a middleweight bout at UFC Fight night 55 in 2014. An early takedown attempt by Andrews saw him and Alvey land on his head, knocking him out.

Alvey quickly turned around on the mat and finished Andrews off. Unfortunately for Andrews, injuries and a succession of defeats would see him leave the UFC after only five fights.

Confidence in your abilities is important but it came back to bite Jarred Brooks during his UFC Fight Night 131 flyweight fight. He lifted Jose Torres, a newcomer to the UFC, onto his shoulder ready to slam him. In the act of slamming his opponent, Brooks miscalculated and knocked himself out.

That loss proved to be tough to come back from and even though he won his next bout, Brooks was cut from the UFC at the end of 2018. Despite failing to capture and defend a UFC title, Brooks has shown his abilities as a fighter by succeeding in Rizin and One fighting promotions.

Being a world-class grappler doesn’t protect you from mistakes in the Octagon. Matt Lindland is an Olympic silver medal-winning wrestler but switched his own lights off in a failed takedown attempt at UFC 43. The then-middleweight fighter was knocked out when Falaniko Vitale landed on top of him.

The first-round loss was an embarrassing one but perhaps Lindland had the last laugh as he beat Vitale in a near-instant rematch at UFC 45. Lindland would continue to fight in the UFC for a couple more years before moving to various other promotions later in his combat career.

In a rare double knockout, Gray Maynard managed to get away with knocking himself out during his lightweight bout at The Ultimate Fighter Finale 5. Maynard picked his opponent up and slammed him to the mat but also drove his own head down. The force of the slam knocked Maynard out.

However, that huge slam also inflicted plenty of damage to Maynard’s opponent, Rob Emerson. Maynard was out cold but Emerson suffered an injury to his ribs and immediately tapped out, unaware that his opponent was knocked out. In a bizarre situation, the fight was declared a no-contest as both combatants were unable to continue.