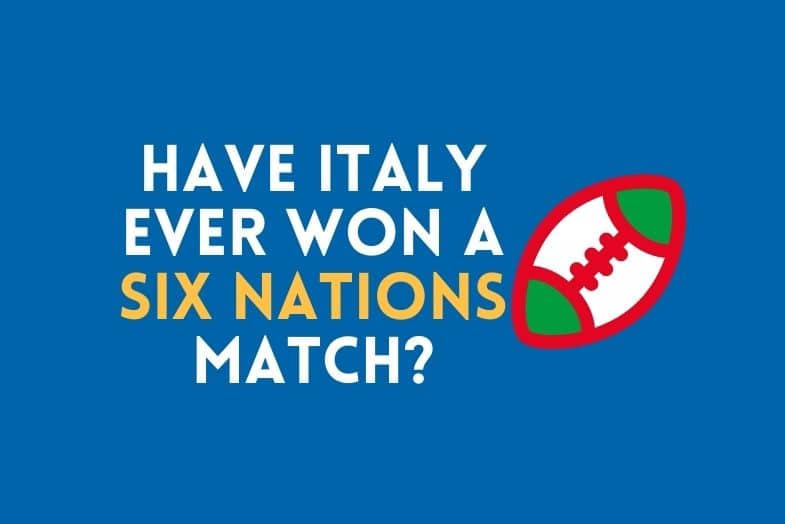 The Italian national side are known for their struggles in the Six Nations tournaments, suffering many defeats since joining the famous European competition. However, the Azzurri have not always been on the losing end in the Six Nations. How many games have they really won in the competition? Who have they picked up the most wins against? And how did they join the Six nations in the first place?

Join us as we go through the history and triumphs of Italy in the Six Nations.

When Did Italy Join the Six Nations (and Why)?

Italy joined the Five Nations in 2000 to create the Six Nations format that is still used to this day. After England and France dominated the Five Nations for years, causing many pundits to question the standard of the competition, Italy was included in an attempt to raise the legitimacy of the tournament.

Italy joining also meant that every team would play in the same amount of rounds across Europe, raising further interest for the sport and the Six Nations tournament.

Have Italy Ever Won the Six Nations?

Despite being added to the tournament to improve the quality standard, Italy have never won the Six Nations tournament. Their highest finish came in 2013 when they finished fourth following their wins over France and Ireland.

Have Italy Ever Won a Six Nations Game?

Eight of Italy’s eleven wins have come at the Stadio Flaminio, making it a promising fortress for the Azzurri. Italy have only won two Six Nations matches abroad, both against Scotland at Murrayfield, Edinburgh.

Have Italy Beaten England at Rugby?

Italy have faced England in rugby union 29 times, with England winning every single game since their first meeting in October 1991.

England’s largest marginal victory came on the 17th February 2001 when they defeated the Azzurri 80-23 at Twickenham Stadium.

Have Italy Beaten Wales at Rugby?

Italy and Wales have faced each other 31 times in rugby union, with Wales winning 27 of the contests. Wales currently have a winning streak of 16 games against Italy from 2008 to the present day.

Have Italy Beaten Ireland at Rugby?

Italy have won four of their 34 rugby union matches against Ireland with their only Six Nations win coming in 2013 at the Stadio Olimpico.

Ireland have scored an incredible 1,172 points against Italy whilst the Azzurri have collected 495 since their first game in 1988 at Lansdowne Road, Dublin.

Have Italy Beaten France at Rugby?

Italy have won three of their 46 rugby union matches against France, winning two of them in the Six Nations. Their first-ever win over France was in the 1997 European cup Final, winning 40-32 at the Stade Lesdiguieres

Their first Six Nations victory over les Bleus came in 2011, winning a close battle 22-21 at the Stadio Flaminio in Rome.

Italy’s second win came just two years later in 2013, once again winning in Rome 23-18, this time at the Stadio Olimpico.

Have Italy Beaten Scotland at Rugby?

Italy have defeated Scotland seven times in the competition between 2000-2015. The Azzurri’s first-ever win in the Six Nations was over Scotland, defeating them 34-20 at the Stadio Flaminio in 2000.

Italy have performed considerably well against Scotland, winning 63% of their eleven Six Nations wins against the Scottish side.

Scotland have won 25 of the 33 meetings between the two nations, scoring an overall 846 points to Italy’s 542.

How Many Six Nations Game Have Italy Won?

Italy have won 12 Six Nations matches from 2000 to the present, defeating Wales, Scotland, Ireland, and France.

When Did Italy Last Win a Six Nations Game?

Italy’s last win in the Six Nations was a surprise 22-21 away win over Wales on 19 March 2022. This was Italy’s first Six Nations win in over seven years, with their previous victory coming via 22-19 win over Scotland at Murrayfield.