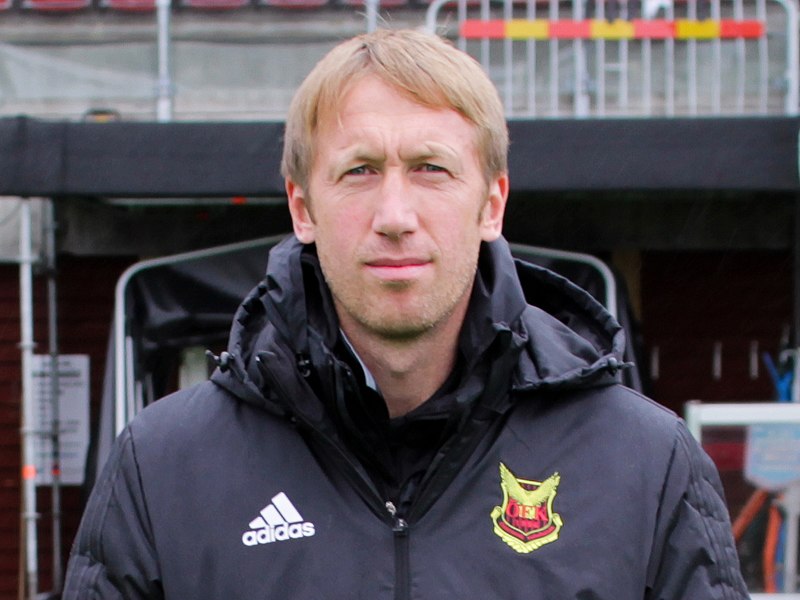 From the doldrums of Swedish football, to the top-flight, to Europe, to managing a Welsh club in England’s second division, to the Premier League; Graham Potter’s career in the dugout has been nothing if not unconventional.

After a nomadic playing career as a left-back, representing ten clubs including Birmingham City, Stoke City and Southampton, Potter’s first foray into management started in December 2010, when he took over the reins at Swedish outfit Östersund, who had just been relegated to the fourth tier for the first time since being founded in 1996.

The club were at their lowest ebb yet; it seemed an utterly thankless task. Even club chairman Daniel Kindberg, despite holding Östersund dear to his heart, was set to walk away, before a man with no experience of management, let alone in Sweden, let alone in the country’s fourth division, was recommended to him by then-assistant manager at Swansea City, Graeme Jones.

His only previous coaching had been with the University of Hull, the Ghana women’s team, the England Universities Squad, and Leeds Metropolitan University.

He accepted it was an extremely dicey move, telling i in 2018: “It was a huge step.

“It was probably the biggest challenge I’ve had in my life. The first six months were really tough because you’d relocated with your family and you had to adapt to a new life, a new culture, a new country. But thankfully it’s gone well.”

And yet, in no time at all, Potter seamlessly made his mark.

Courtesy of a number of shrewd additions, helped by his own connections with Nike Football Academy, and his signature progressive, aesthetically pleasing style of play, Östersund won successive promotions in Potter’s first two years in charge. As a result, in 2013, the Jämtkraft Arena hosted football in the Superettan, Sweden’s second division, for the first time in the club’s history.

With a fresh three-year deal to his name, Potter set about consolidating Östersund in the second tier; in their first season, they finished tenth, before climbing to fifth the year after. But then came even more unprecedented success.

In October 2015, Potter led them to the Allsvenskan, the Swedish top-flight, for the first time. For a club who had spent almost its entire life languishing in the lower reaches of the county’s football pyramid, this was incredibly uncharted territory.

When Potter arrived, Östersund had an average attendance of a paltry 992; their record turnout at the 8,600-seater Jämtkraft was merely 4,000, meanwhile, and that wasn’t even for football – it was for motocross. Now, here they were not only playing in front of tens of thousands at clubs like Hammarby and Malmö FF, but more than holding their own, too.

And yet, the miracles did not stop there. Promotion to Sweden’s top table was astonishing enough, but they more than held their own in the Allsvenskan, finishing eighth in their first season in 2016.

A fifth-place finish and the club’s first major trophy followed in 2017, when they beat reigning champions IFK Norrköping 4-1 to claim the Svenska Cupen, the country’s main cup competition, followed in April.

Further reward was their first appearance in European football, qualifying for the Europa League via their cup glory. And though they took one of the most circuitous routes through the competition, entering in the second qualifying round in mid-July, it proved another of Potter’s greatest feats.

A stunning 2-0 win over Turkish titans Galatasaray at the Jämtkraft was followed up with a 1-1 draw in Istanbul which saw the home faithful swallow their pride and applaud Potter’s band of brothers of the pitch.

“I was stunned,” Kindberg told BBC Sport in 2017. “The Turkish supporters – who had been very hostile at the beginning – rose up and applauded us off the pitch.

“I asked some of the staff, ‘What is this?’ And they were shocked. Galatasaray were founded in 1905 and they said that never in their history had they applauded a team off. It had never happened before.”

Greek side PAOK were then successfully negotiated in the final qualifier, beating on away goals after 3-3 draw on aggregate after two legs. It made Östersund Sweden’s only representative and Potter the only British manager in the competition proper.

Finishing second only on goal difference in a group including Hertha Berlin, who they beat 1-0 at home, and Athletic Bilbao was impressive enough, but it was their 14th and final match in the tournament which will no doubt live long in the memory.

Arsene Wenger’s Arsenal were all-but through having humbled Östersund 3-0 in their own back yard in mid-February; and indeed, the Gunners would ensure that Potter’s men bowed out at the round of 32.

But not before an incredible 2-1 win in the return leg in February 2018 left the Emirates stunned and Potter’s stock higher than ever.

Two goals in two first-half minutes from Hosam Aiesh and Ken Sema – now at Watford – forced a lead the Gunners could only halve on the night. Even though they exited the tournament that night, you would not have known it by the scenes at the Emirates.

Potter  would eventually cut ties with the club the following June for Swansea City, leaving Östersund seventh in the Allsvenskan 11 games into the season, on the back of an average gate of 5,265 in 2017, more than six times bigger than that when he first arrived.

A solid first season in English football management saw Potter help the Swans, who finished tenth, regain the identity somewhat having been relegated the season before.

His dynamic, engaging playing style was more akin to the so-called ‘Swansea way’, while he put his faith in countless youngsters; two of them, winger Daniel James and 24-goal man Oli McBurnie, were sold to Manchester United and Sheffield United the following summer for £15 million and £20 million fees respectively.

Potter moved on, too, taking over from the sacked Chris Hughton at Brighton & Hove Albion prior to their third successive Premier League campaign to complete the longest of paths into the top-flight for any of its current 20 bosses.

And Östersund? Well, thanks to the foundations Potter laid, the Swedish underdogs have continued to thrive.

They went British again for their next appointment, turning to Ian Birchnall, formerly a coach at the academies at Leeds United and Bradford City and assistant at Norwegian sides Sarpsborg 08 and Viking.

Under Birchnall, Östersund secured sixth place in the 2018 campaign, though this season has been more arduous, occupying the lower echelons of the table. The club has also continued to attract cast-offs from English clubs, just as it did under Potter, such as Chelsea youngster Charlie Colkett and former Manchester United midfielder Ravel Morrison, before moving to Sheffield United.

“We are not here to be mid-table,” Kindberg said in that same BBC interview.

“That is terrible. Being fourth is the worst position you can be. Second is not good enough. We are here to be champions.”

Potter may be gone, but it’s thanks to the spell he cast on Östersund during his eight-year tenure that these dreams are far closer to reality than they ever were before.