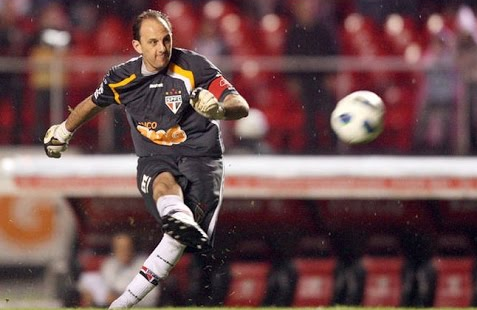 It’s often said that receiving most of the blame is an occupational hazard of being a goalkeeper. Let the ball past you, and whatever the circumstances, it’s almost always primarily your fault.

But some goalkeepers have been just as responsible for goals at the other end of the pitch during their careers, with these eight all getting on the scoresheet at least once:

Star goalkeeper or star striker? Though Ceni is regarded as one of the best Brazil have produced between the sticks, it will no doubt be his finishing that he is remembered predominantly for.

In more than 1,200 appearances for São Paulo, who he represented for 23 years before retiring in 2015 aged 42, Ceni netted a staggering 131 goals for the Brazilian side, becoming their go-to man for free-kicks in the process.

He still holds virtually every scoring record for a goalkeeper: most free-kicks (61) and penalties (69) netted, and, of course, the most goals scored by a shot-stopper (131).

Few will be as memorable as to him as his 100th, though, when he scored a stunner in what proved to be the winning goal against city rivals Corinthians in 2011:

Another record-breaker, ‘El Buldog’ scored more international goals (eight) than any other goalkeeper, and is the only player between the sticks to have netted a hat-trick, too.

His 67-goal haul is bettered only by Ceni, but the Paraguayan’s strike for Argentinian side Vélez Sarsfield against River Plate in 1996 is undoubtedly the most unforgettable.

With his team awarded a free-kick, Chilavert darted to lump the ball forward, lobbing the opposition keeper who fell over in the process, before celebrating; bulldog shirt, head-first dive and all.

Though the Colombian ‘sweeper-keeper’ will likely go down in infamy more for his scorpion kick save against England in 1995, the 41-goal man was just as handy at putting the ball in the opponent’s net as he was at keeping it out of his own.

And River Plate were again the victims of a wonder free-kick from a goalkeeper when, in 1995, Higuita unleashed a perfectly-placed set piece for Atlético Nacional. Hilariously, he was already on his way back to his own goal as it flew in.

The record number of penalties scored by a goalkeeper in a European league? The most goals bagged by a stopper in the Champions League? Those records would both belong to former Hamburg and Bayern Munich goalkeeper Butt.

The German, who represented his country four times, hit 32 goals in his career, though his most notable one is arguably one of the less spectacular of the bunch.

It was in April 2004 when Butt stepped up to put Bayer Leverkusen 3-1 up at Schalke 04, only to be guilty of celebrating with a little too much zeal.

The home side kicked off with Butt still not back in his goal, and from the kick-off, Schalke forward Mike Hanke duly lobbed the goalkeeper, who went from hero to villain in a matter of seconds.

It didn’t prove too costly, though, Leverkusen still saw out the remaining 15 minutes to record a 3-2 win at the Veltins-Arena.

The Dane will go down in history as one of Manchester United’s greatest goalkeepers, but he too had his moments at the other end of the pitch.

Managing 13 goals for himself in his career, the treble-winner and Euro 1992 champion’s most famous strike arguably came in a 1995 UEFA Cup tie against Russians Rotor Volgograd.

The Red Devils needed two late goals to overturn a 2-1 deficit and progress to the second round, and while they only got one, it will never be forgotten.

Up came Schmeichel to join a packed penalty area awaiting a Ryan Giggs corner, before he leapt majestically to nod the ball just over the line and send the Old Trafford crowd delirious. If you’re going to bow out a competition, that’s the way to do it.

Poor Tim Howard. The Everton keeper never meant to embarrass his Bolton Wanderers counterpart Adam Bogdan, he merely hoped to start another attack, rather than deliver the killer blow.

On a particularly windy night in January 2012 at Goodison Park, the American did little more than punt his goal kick upfield, only for the conditions to help force the ball over Bogdan’s head and into the Gwladys Street net.

It was Howard’s only career goal, and he admitted afterwards that he felt more than a tinge of sympathy for Bogdan, saying: “I’m disappointed from a goalkeeper’s standpoint and you never want to see that happen. It’s ugly, not very nice and can be embarrassing.”

After Howard put Everton ahead, it was Bogdan who had the last laugh, though, as the Trotters came from behind to record a 2-1 victory over the Toffees that night.

Another goalkeeper who has registered on a scoresheet, former England stopper Robinson enjoyed this particular luxury twice in his distinguished career.

The first came during his six-year spell at his first senior club, Leeds United. They looked set to be heading out the League Cup in the second round in September 2003 at the hands of Swindon Town, when a glorious 90th-minute header forced extra time.

Robinson’s heroics did not stop there either; he saved a Swindon penalty in the shoot-out later on as Leeds went on to inexplicably progress.

Four years later, he finally added to his tally while at Tottenham Hotspur. Much like Howard’s goal, nothing more than a hopefully ball up the pitch resulted in him lobbing his opposite number, Watford’s Ben Foster, to put Spurs 2-0 up against the Hornets and leave Foster red-faced.

A week later, Foster and Robinson were on England duty together. Talk about awkward…

All managers long for fast starts from their teams, but they don’t normally instruct their goalkeepers to go for goal straight from the first whistle.

That’s exactly what happened with Stoke’s Asmir Begović in November 2013 as he, with the aid of the quintessential windy conditions in the Potteries, put his team ahead against Southampton after just 13 seconds.

Considering Saints keeper Artur Boruc had only conceded three league goals that season prior to then, it was some feat, and the two later found themselves team-mates vying for the number one shirt at Bournemouth.

The Bosnian shared Howard’s sheepishness post-match, though, admitting: “It’s a cool feeling but it was a fortunate incident. I feel a bit bad for Boruc; it does not make a goalkeeper look good and after it I did not want to celebrate out of respect for him.”