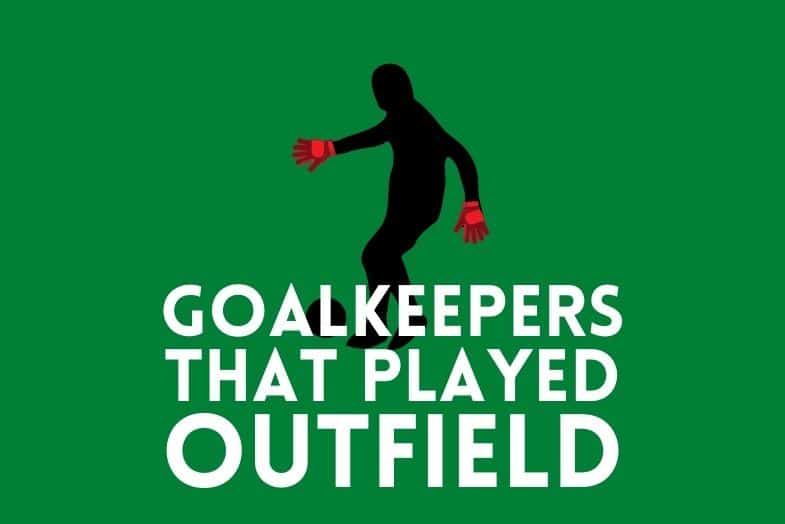 They say that you have to be slightly mad to want to become a goalkeeper. That might not be entirely true, but you do require certain characteristics like height, bravery, and concentration. One thing is for sure; it can be a lonely job at times.

However, some goalies have left their penalty areas behind and caused the net to bulge when their team was in desperate need of a goal.

Some have even had the chance to play as an outfield player when circumstances dictated.

Let’s take a closer look at examples of goalkeepers taking their opportunities to help their teammates on the pitch.

Has A Goalkeeper Ever Played Outfield in the Premier League?

There has only been one occasion where a goalkeeper has played outfield in the Premier League. The former England international stopper David James played as a striker for Manchester City on the final day of the 2004/05 season in a game against Middlesbrough at the City of Manchester Stadium.

Why Did David James Play as a Striker?

With Manchester City drawing 1-1 with Middlesbrough needing a win to qualify for the UEFA Cup, and the game entering the closing stages, manager Stuart Pearce decided to bring on back-up keeper Nicky Weaver and move starting stopper David James upfield to play as a target man.

Pearce explained after the game that the move had actually been premeditated, despite it coming as a surprise to everyone in the stadium, including to James himself.

According to Pearce, he had thought about his options the night before for a situation where City had to score a late goal and were playing long balls up the pitch, and figured that 6ft 4in James would offer plenty of height.

However, Pearce admitted after the game that while the plan was to unsettle the Middlesbrough defence, the unusual move had actually affected his own side as well.

The game finished 1-1, and Middlesbrough qualified for the UEFA Cup at the expense of City.

With time running out in the match and Man City in desperate need of a winning goal, manager Stuart Pearce produced an outfield shirt with David James’ number 1 on it.

American midfielder Claudio Reyna was withdrawn, substitute keeper Nicky Weaver was sent on, and a surprised James was dispatched to play as a target man.

The City players were as surprised as their Middlesbrough counterparts, and after spending the final few minutes ineffectually chasing down long balls, James played a part in earning City a last-gasp penalty.

However, his “strike partner” Robbie Fowler missed the spot kick, the game finished 1-1 and City missed out on European football by finishing 8th in the league.

Perhaps one of the few managers who have previously played between the sticks might have had second thoughts about Pearce’s unusual move.

There have been several notable cases of goalkeepers playing outfield, including in an FA Cup final (Ray Wood), on international duty (Joe Lewis) and in friendly matches (Fabien Barthez).

After being injured during the 1957 FA Cup final, and in the days before substitutes, Manchester United keeper Ray Wood had to leave the field and be replaced in goal by Jackie Blanchflower, a centre half.

However, towards the end of the game, with United trailing, Wood returned to the field to play on the wing, but to no avail, as United eventually lost out to Aston Villa.

Stuart Pearce, who we have learned played David James up front for Manchester City, also deployed a goalie as an outfield player while manager of England’s Under-21 side.

Cruising to victory over Azerbaijan in 2009, Pearce introduced Joe Lewis, currently the regular No. 1 for Aberdeen, as a makeshift striker for the final 15 minutes.

Even the best managers have been convinced to give their highly paid, superstar goalkeepers an opportunity to show what they can do further up the pitch.

After in his own words being “pestered” by Fabian Barthez to play outfield, Sir Alex Ferguson relented and gave the Frenchman a chance to play as a striker in a friendly against a Singapore All Stars Team in 2001, which United won 8-1.