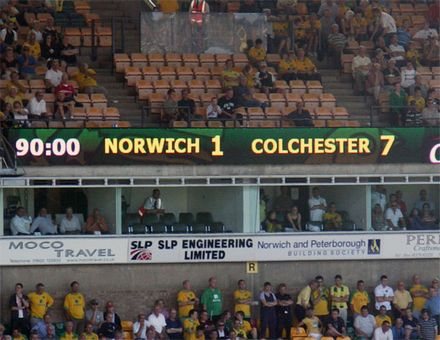 It’s one of football’s age-old adages. Start as you mean to go on, they say, and you will lay the foundations for a successful campaign. Build momentum right from the get-go, set the tone, send a statement to your rivals.

But in England, that’s not always been the case, as the eight slow starters went on to debunk this theory later in the season:

It still stands as the worst start to a season in the history of English football. Seven league games, zero points, zero goals. No other side in the country has ever suffered this particular ignominy.

The exciting new era promised by new manager Frank de Boer came to an abrupt end as quickly as early September, but in his place came the solid yet unspectacular Roy Hodgson, who slowly but surely revived a side nosediving towards the Championship.

Not until mid-December did Palace occupy a place above the relegation zone, but thanks to four wins and two draws from their final six games, they stayed up at a canter, ending up 11 points above the drop.

In fact, their 11th-place finish represents their second-best Premier League campaign which, given their utterly disastrous start, was some feat.

Spurs’ beginning to Mauricio Pochettino’s second year in charge hardly compared with Palace’s in 17-18, but for a team that would go on to challenge for the title, it was hardly the ideal start.

Frustrating early results, such as no wins in their first four games and home draws to Stoke City and Everton were soon put behind them, though. By the end of February, they were second, two points behind leaders Leicester City, having just recorded their sixth successive league victory.

And though they could not ruin the Foxes’ fairy tale, and a late-season capitulation also saw Arsenal overtake them, Spurs still ended up in a highly credible third place, then their best finish in the history of the Premier League.

Just like at Palace in 17-18, a poor early start cause a Dutch manager to leave his job in September after Newcastle’s Ruud Gullit resigned just five games into the 1999-2000 season.

Three defeats from their opening trio of matches was followed by 3-3 home draw against Wimbledon, with the Toon Army 3-1 up with 25 minutes to go.

And after that came a loss in their own back yard in Tyne-Wear derby to Sunderland, which saw Gullit leave both Alan Shearer and Duncan Ferguson on the bench. It proved to be his final match in charge.

Again, considering their awful opening – they won just two of their first 11 league games – to finish 11th, 19 points clear of the drop zone, could only be considered a successful campaign for the Geordies.

Their arch-rivals enjoyed their own change in fortunes under Roy Keane, yet theirs was far more spectacular.

On the back of a miserable Premier League campaign, finishing bottom with 15 points in 2005-06, Sunderland endured a nasty hangover at the start of their Championship season the following year, losing their first four matches.

Keane took charge thereafter, and led them to the second-tier title, going 17 games unbeaten in the second half of the season before a thumping 5-0 win at Luton on the final day ensured they edged out Birmingham City to be champions.

Has there been a more Jekyll and Hyde season in English football in recent memory than that of Fulham’s Championship campaign in 17-18?

Much-fancied to build on their sixth-place finish the year before and seal promotion this time, Slaviša Jokanović’s men sat 14th five games in with just win to their name.

By the halfway mark, they were in a disappointing 11th, having become the first team to lose away to hapless Sunderland in 364 days earlier in December.

But their following game, a 2-1 home win over Barnsley, proved the start of an incredible 23-match unbeaten run, characterised by their refreshing, free-flowing style of play.

And though they narrowly missed out on automatic promotion to Cardiff City, they later achieved the return to the Premier League that they deserved via the play-offs.

At the end of the 2015-16 season, Sheffield United’s fifth successive year in League One, out went Nigel Adkins after an 11th-place finish and their worst points return in the third tier since 1983, and in came boyhood Blade Chris Wilder.

Wilder had never managed at as high a level previously, and if he needed any indication of the scale of the task he had taken on, he certainly got it immediately; after four games, the Blades propped up the table with a single point.

From then on, though, everything clicked, and the Blades began their procession to the League One title; a final-day win over Chesterfield securing a 100-point haul that seemed impossible in mid-August.

The miracles did not stop there, either; after an impressive first campaign back in the Championship, the Blades returned to the Premier League for the first time in 12 years the following season, with Wilder’s legendary status at Bramall Lane confirmed.

Another side who suffered a pretty dreadful beginning to a League One campaign, Norwich marked the start of their first season in the third-tier for 49 years with an utter embarrassment, losing 7-1 at home to Colchester United. Boss Bryan Gunn lost his job six days later.

Just a point from the next two matches followed, before the Canaries poached Colchester’s manager, Paul Lambert, who led them to the League One title, amassing a club-record 95 points in the process.

And like Wilder at Sheffield United, Lambert also achieved a second promotion, leading Norwich back to the Premier League as Championship runners-up the following year.

After a 2-1 defeat away to Bristol Rovers left them with just two points from their first five League Two games in 2004-05, Southend looked highly unlikely to end their seven-year wait for a return to the third tier.

But from then on, the Shrimpers’ form markedly improved under Steve Tilson, voted the club’s greatest player and manager in 2014.

And two extra-time strikes from 24-goal man Freddy Eastwood and Duncan Jupp in the play-off final against Lincoln City ensured they had something to show for their remarkable turnaround.

It got even better for them the following year, too, as Tilson secured successive promotions by becoming League One champions, though their spell in the Championship would only last a single season.