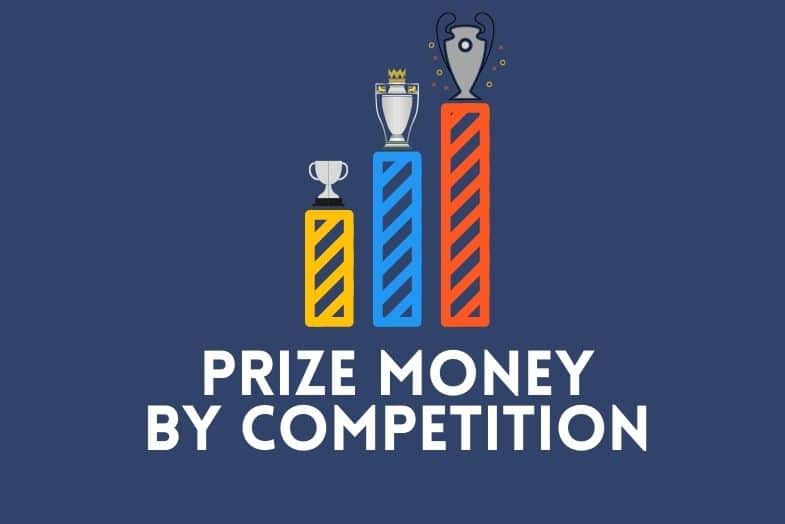 A sport that is worth billions and loved globally, football’s development as one of the most-watched sports on the planet has helped generate immense wealth.

With television broadcasting playing a significant role in the money generated through British football clubs, even teams in the lower divisions of the UK can earn considerable payouts from different competitions such as the FA Cup and League cup.

But how does prize money work in football? And what is the difference in pay compared across some of the most famous competitions in football?

Join us as we explore the football finances to see how the funds are shared across the top tournaments and leagues.

How Does Prize Money Work in Football?

Prize money in football is divided amongst the clubs involved in the competitions, with the generated money being split depending on the team’s overall position in the tournament/league.

In a league format, such as the Premier League, the teams competing split the money in a similar way to a tournament. The champions of the league throughout a season will earn the highest amount of prize money whilst the remaining teams receive smaller fees depending on their overall league position.

With the Premier League receiving an incredible £2.5 billion per season in television broadcasting rights, each team receives between £90-£150 million per season depending on their league table finish.

How Much Do Teams Get for Winning the Champions League?

The finalists of the UEFA Champions League receive an incredible £18.3 million whilst the winners receive an additional £4 million, a sum that rises every year due to increasing television broadcasting value.

The Champions League prize money is set up as a ‘market pool’ with a sum of roughly £300 million being split amongst the participating teams. This pool is generated from broadcasting rights and advertisement revenue, with the payments being divided amongst clubs from the group qualifying stages to the final.

Clubs can earn roughly £15 million for qualifying into the group stages whilst receiving a £2.9 million for each group stage win. A further £9 million is awarded if they reach the last 16 stage of the competition with progression to the quarter-finals earning the clubs an additional £10.5 million.

How Much Do Teams Get for Winning the Premier League?

The prize money for winning the Premier League is one of the highest in the top European Leagues, with 2020-21 season winners Manchester City receiving £153.9 million.

This incredibly high sum is generated through the multi-million-pound television broadcasting deals offered to the Premier League, with the demand to see clubs such as Manchester City, Liverpool, Manchester United and Arsenal increasing each year across the world.

There was plenty of wealth to share at the top of the Premier League table in the 2020-21 season, with the teams finishing in the top six earning a combined £737.5 million for their respective table positioning.

How Much Do Teams Get for Winning the FA Cup?

Since its creation in 1871, the FA Cup has grown to be one of the most historic competitions in British football, further emphasised by the £1.8 million prize fund that the champions of the cup win.

Beginning with 174 teams in the competition, the FA Cup sees every team earn between £1,000-£2,500 simply for their participation in the opening qualifying stage of the cup.

As more teams are eliminated per round, the prize money gradually increases with each team in the first round earning £22,000.

This money is generated through the Football Foundation with the FA partnering Sport England and the Premier League to ensure the prize money is fairly distributed amongst teams competing in the competition.

How Much Do Teams Get for Winning the EFL Cup?

The EFL Carabao Cup prize money is split amongst the different rounds of the tournament with the winner of the final receiving £150,000. Overall, the prize money earned from round one to the final can equate to just over £1 million.

With 70 teams participating in the first round, each side receives £5,000 thanks to television and broadcasting rights. This amount increases in round two, where the remaining 50 teams receive a further £7,000.

The amount gradually increases the further into the tournament teams go, with even the runners up earning £50,000 for their loss at Wembley Stadium.

Although the Champions League is seen as the pinnacle of club European football, it is the Premier League that has the highest prize money.

A club finishing bottom of the Premier League table would receive a greater sum than a team who won the Champions League, highlighting the financial gain the top English flight of football has received from increasing television broadcasting revenue.

Despite the history and tradition of the FA Cup, the competition’s winners receive far less than the Premier League and Champions League with £1.8 million being awarded to the cup winners.

Whilst billions have been poured into the top leagues across Europe due to an increase in coverage and team quality, the prize money for domestic cups has failed to follow suit.

Competitions such as the FA Cup and Carabao League Cup are now viewed as less important compared to the domestic leagues for many football fans. Although every Premier league side competes in these tournaments with some of the best players in the world, the demand for television coverage and high revenue broadcasting deals for the cup fixtures are significantly lower.

Consequently, the excitement surrounding any dramatic cup fixtures or underdog cup run is resigned to the lower division teams, who rarely make it to the quarter-finals of these competitions. Top teams like Manchester City have dominated the Carabao Cup, winning the trophy for the last four years. Although the four years of prize money equals over £8 million, the sum is less than ten percent of what Man City make through winning the Premier League once.