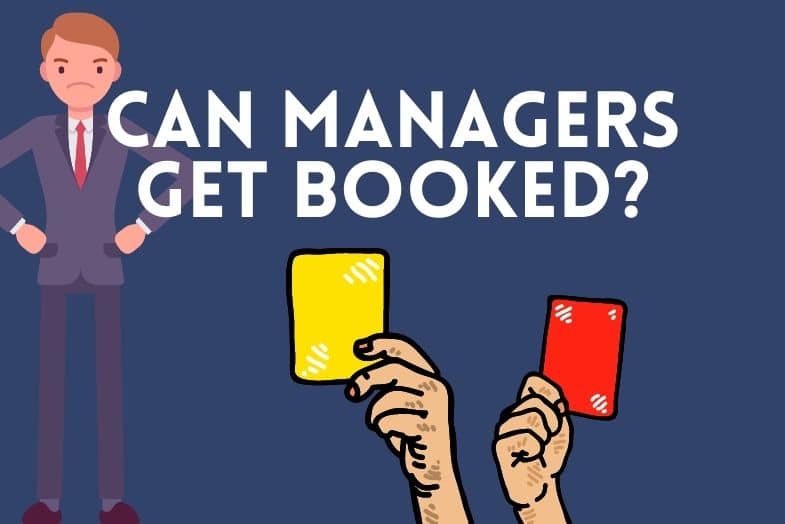 Football truly is The Beautiful Game. Well, except for when it’s not. Unfortunately, players can’t be cautioned for playing horrible passes and medieval football. But they can be cautioned for a laundry list of offences.

And for those truly naughty and antisocial behaviours, they can be sent straight off the pitch. Not to mention they are fined for any bookings they receive.

It used to be that football managers were relatively safe from being disciplined. But this isn’t the case in the Premier League anymore.

Can Football Managers Get Yellow Cards?

In the Premier League, managers can get yellow cards from match officials. Referees can hand managers a yellow card for a variety of reasons. If they receive a second yellow in the same game, they will be asked to leave the technical area.

Managers can be given a yellow card for the following stage 1 offences:

What Happens if a Manager Gets Booked?

If a manager is cautioned by a match official they will need to be on their best behaviour. Like players, a second yellow will result in a sending off. Four yellow cards in the same season will result in a touchline ban and eight yellows will yield a two-match ban.

Manchester City’s Pep Guardiola has many Premier League records to his name. One of those he can be proud of is becoming the first manager in the Prem to receive a yellow card. Pep was cautioned in the Community Shield while his club faced off against Liverpool for screaming at a match official.

Managers can be given a yellow card for the following infractions:

According to the rules of the game, managers will be held accountable for their backroom staff. This means an infraction by team assistants or coaches will result in the manager being cautioned.

Can Managers Be Sent Off?

Managers can be sent off for or committing a “stage two offence”. Offences include violent conduct, spitting and stopping the opponent from restarting play. If the manager or any of their staff in the technical area commit one of these offences, they will be given a red card and sent to the stands.

What Happens if a Manager Gets a Red Card?

If a manager receives a red card, they will have to leave their technical area and head to the stands for the remainder of the match.

Managers can receive a red card and be sent off for committing a stage 2 offence.

Stage 2 offences include the following:

If any staff commits one of these offences in the technical area or cannot be identified, then the manager will be given a red card and sent off.