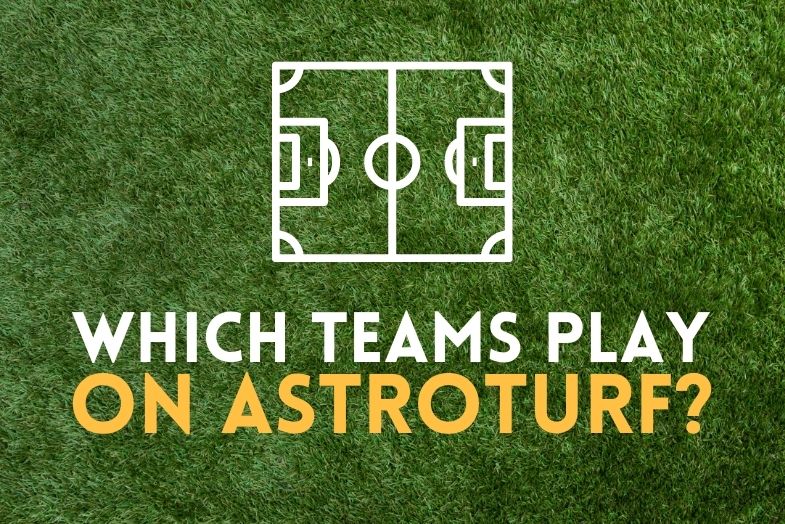 The quality of the surface on which football is played is obviously vitally important. Gone are the days of the mud bath pitches that yesteryear’s top players were forced to play on; today, most pitches in top-flight leagues are pristine.

So how is this achieved? Are the top clubs’ playing surfaces real grass or artificial? And are professional clubs in the UK allowed to play on artificial surfaces?

What Are Artificial Pitches Made Of?

An artificial pitch is essentially a surface of synthetic fibres designed and made to look like natural grass.

The first pitches, comprising short-pile fibres without infill, of the 1960s have been succeeded by second- and third-generation pitches. The third-generation (3G) systems, most widely used today, use longer fibres and infills that are mixtures of sand and granules of recycled rubber, or “rubber crumb”.

The vast majority of professional football pitches are not artificial, and are instead turf pitches. However, many clubs now have “hybrid” pitches, which are a mixture of real grass and artificial fibres.

Hybrid pitches use a combination of real and artificial grass, and are commonly around 95% natural and 5% synthetic. These pitches are effective and sought after because they can endure more playing hours while also recovering faster than 100% natural grass.

Iconic clubs and stadiums, including Manchester City’s huge pitch and England’s Wembley Stadium, now boast hybrid pitches, decent evidence that these pitches are the best in the world.

However, some professional clubs in the UK and elsewhere do still play on artificial “plastic pitches”, which is often a source of contention among opposition clubs regarding unfair home advantage (an argument often cited when discussing pitch sizes as well) and the number of injuries players pick up on these pitches.

Which Football Team Had the First Artificial Pitch?

The first English football teams to play on artificial surfaces were Queens Park Rangers, Luton Town, Oldham Athletic and Preston North End; QPR were actually the first of the four when they installed a plastic “astroturf” pitch at Loftus Road in 1981.

The trend arrived in the UK from across the Atlantic in the early 1980s, but was not without controversy.

Problems such as the uneven bounce of the ball and players having difficulty keeping their footing eventually led to the English FA banning these primitive versions of artificial pitches in 1988.

But with the advent of 3G artificial surfaces, far superior to those introduced in England in the 1980s, there are many clubs worldwide that still play on so-called “plastic pitches“.

They are particularly prevalent in northern European countries such as the Scandinavian nations as they are designed to resist and recover from cold weather and can be played on in sub-zero temperatures.

The England national side played their first full international on an artificial surface when they played against Russia in Moscow’s Luzhniki Stadium in a 2008 World Cup qualifier due to the weather conditions in the city.

Artificial Pitches in the Premier League

Premier League clubs are not allowed to play on the 100% artificial pitches known as 3G pitches, which means all pitches used in the competition must be natural grass or a hybrid of natural and artificial grass.

So while the dimensions of Premier League pitches can vary, the actual surfaces at all clubs are remarkably similar.

Most of the clubs in the Premier League now play on hybrid pitches, which are usually composed of around 95% grass and 5% artificial elements, and so technically these are not entirely grass pitches, but they are sanctioned by the Premier League and the FA.

Therefore, there has never been a Premier League match played on a wholly artificial pitch. However, there have over the years been some calls for these pitches to be introduced into the top flight, particularly after the FA ruled that they could be used for FA Cup games.

Are There Any Artificial Pitches in the Football League?

The English Football League (EFL), like the Premier League, does not allow its member clubs to have artificial pitches, which means all matches must be played on either a 100% grass pitch or a hybrid of grass and artificial elements.

For example, when Sutton United won promotion to the EFL by winning the National League in 2021 they were forced to replace their artificial surface with a grass pitch, at a cost of around £500,000.

But given the number of postponements in the EFL due to waterlogged or unplayable pitches, and the poor condition of many pitches in the lower leagues, there have been calls for the league to allow the use of high-quality artificial 3G pitches.

This may be agreed on in the future, but as it stands there are no fully artificial pitches among the EFL’s 72 member clubs.

Artificial pitches, although banned at the top levels of English football, are allowed further down the league pyramid, from the National League (one league below EFL League Two) downwards.

Who Has “Plastic Pitches” in England?

Unlike England, the Scottish football authorities do allow the use of artificial pitches, and these are used by clubs in each of the country’s top four divisions, including, controversially, in the Scottish Premiership by Livingston.

There has been much debate over the years about whether these pitches should be allowed, particularly in the top flight, with problems cited including the standard of football playable on the surfaces and the risk of injury to the players.

A PFA Scotland petition of members at clubs who play on grass returned a 100% response against the use of synthetic pitches.

However, as things stand, many SPFL clubs continue to play home matches on artificial surfaces. They are: