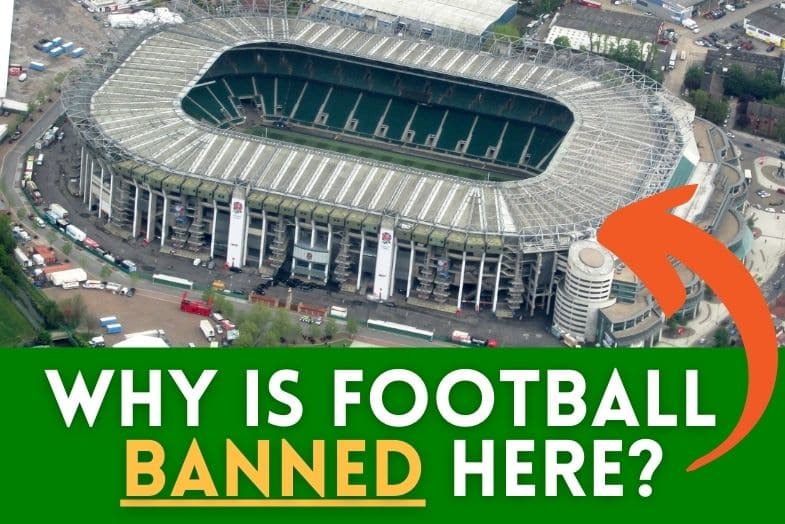 With a staggering capacity of 82,000 seats, the famous Twickenham Stadium has hosted music events, American football, and some of the biggest rugby union matches in British history.

Once used as land to grow cabbages, the land was bought for £5,500 in 1907 with the first match being played two years later in 1909. Since then, Twickenham has also hosted the NFL London Games, The Rolling Stones, and even conventions for Jehovah’s Witnesses in 2016.

While the ‘home of rugby’ certainly can hold enough supporters for any sport in the world, rugby is the main sport hosted at Twickenham Stadium.

But has Twickenham Stadium ever hosted football? And what is the sports ground currently used for?

Who Plays at Twickenham Stadium?

Owned by the Rugby Football Union, Twickenham Stadium is home to the England national rugby union team who play all of their home soil matches at the stadium.

Rugby union is the main sport played at the stadium with Twickenham holding the nickname of ‘the home of rugby’ in England due to its size and historical importance to the game.

Why Is Twickenham Only Used for Rugby?

Although Twickenham has hosted music concerts and NFL matches in the past, the stadium is primarily used for rugby due to it being owned by the Rugby Football Union. While other sports federations can request to use Twickenham, it is ultimately down to the decision of the RFU.

The RFU’s position on football at Twickenham has been rigid over the past decade, with many of the RFU officials believing that football will never be played at the home of English rugby.

Has Twickenham Ever Hosted a Football Match?

Despite being one of the largest sports venues in London, Twickenham Stadium has never hosted a football match. Premier League club, Chelsea, enquired about using the stadium temporarily in 2014 and 2018 however both enquiries were rejected by the RFU.

The RFU does in fact have an official arrangement and an agreement with the local authority that the stadium will stick to hosting only sports previously agreed. This does not include football and is, therefore, the reason behind Twickenham never having hosted football.

As one of the biggest sports in the country, football also has several similar options to Twickenham in terms of usable stadiums for important fixtures, with the 90,000-capacity Wembley Stadium being home for the English football team.

Will Football Ever Be Played in Twickenham?

While it is not impossible due to the size and location of the stadium, Twickenham is unlikely to host football in the near future due to the position held by the Rugby Football Union on not hosting the sport.

Former RFU chief executive Steve Brown revealed that football was never on the RFU radar in 2018 when Chelsea F.C enquired for temporary use.

While it was reported in 2018 that the Rugby Football Union had been in contact with the Premier League club regarding their use of Twickenham, no further talks were held and the plans for Chelsea were stalled.