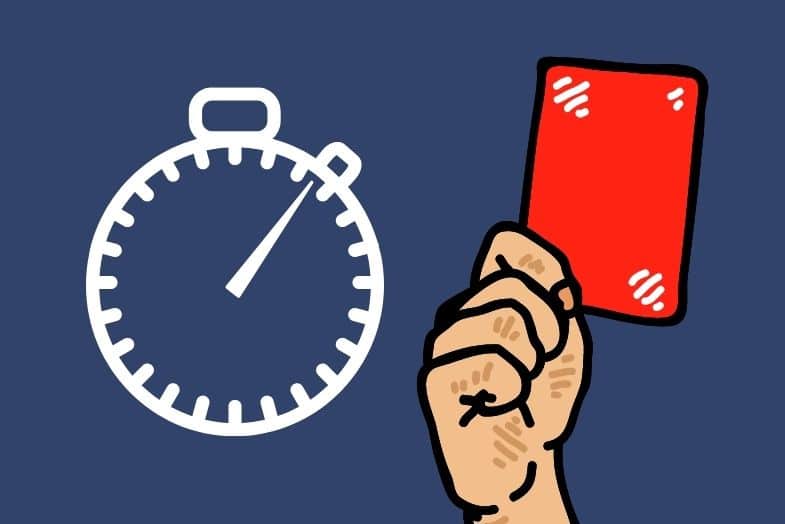 Whether through reckless challenges, poor decision making or matters simply beyond their control, there have been 1,694 red cards given to players since the founding of the Premier League.

While players may be aiming to make an instant impact or benefit their team, their decisions can sometimes lead to mistakes and challenges that the referee is forced to punish with a straight red card. These situations can occur within the opening moments of a game and are well remembered for their changing effect on a match.

But which players have received the quickest red cards in EPL history? And why were they sent off in the first place?

An intense but entertaining match that saw three red cards awarded by referee Kevin Friend, Sunderland’s David Meyler added to the chaos by being sent off just 115 seconds into his substitute appearance against Portsmouth.

While jumping to challenge for a high ball, Meyler elbowed Pompey defender Steve Finnan in the head, forcing the referee to send him off instantly. Lee Cattermole was also sent off for Sunderland while Ricardo Rocha was dismissed for Portsmouth.

A 96th-minute equaliser saw the match eventually end 1-1 with both teams sharing the spoils and without eleven players on the pitch.

In a game which saw Premier League legend, Dennis Bergkamp, play his final game for Arsenal and the Gunners’ last game at the famous Highbury ground, Wigan defender Andreas Johansson played a key role in the memorability of this game by receiving a red card just 90 seconds into his substitute appearance.

Johansson was brought on to help defend a free-kick, however, the defender only added to his side’s misery as he pulled down Freddie Ljungberg in the penalty area and received his marching orders for denying a goal-scoring opportunity. Thierry Henry converted the spot-kick in classic fashion, scoring his third of the game and completing his hat trick in a memorable Arsenal win. The final game at Highbury finished 4-2 to Arsenal, with both the stadium and Johansson having a memorable send-off.

While almost all of the names on this list are there from reckless play or poor judgment, Gareth McAuley’s only fault was that he looked too similar to his teammate Craig Dawson. In an unbelievable referee mistake, the West Brom defender was shown a straight red for a challenge on Wilfred Bony which denied a goal-scoring opportunity in the 89th minute. The only issue was that McAuley was not the man who brought down Bony in the first place.

With supporters, management and players all confused by what was happening, it was assumed by the commentary team that the defender had said something that the referee deemed worthy of a red card. However, the official Neil Swarbrick would later apologise for his mistake as he sent the wrong defender off, and the red card was transferred to Dawson afterward.

Title-chasing Blackburn were dealt a surprising blow to their season when goalkeeper Tim Flowers received a straight red card just 72 seconds into their meeting with Leeds United.

With Leeds striker Brian Deane through on goal, Flowers charged out to close down the approaching forward, Deane managed to change direction in a quick burst of pace and forced the Blackburn stopper to foul the forward. Flowers was consequently shown what would be the quickest red card given to a goalkeeper in Premier League history.

A natural-born leader and Liverpool legend, Steven Gerrard won nine trophies with his hometown club, making 504 appearances and cementing himself as one of the greatest Premier League players of all time. Unfortunately, one of those appearances didn’t last quite as long as the skipper would’ve hoped for as the midfielder was shown a red card just 38 seconds into a substitute appearance against bitter rivals Manchester United in 2015.

Gerrard was brought on by then-Liverpool manager Brendan Rodgers to help turn the tide as the Reds were trailing United 1-0. A fierce sliding challenge after just ten seconds of being on the pitch from the captain caused a roar of encouragement from the supporters, however, his passion would get the better of him just 28 seconds later as Gerrard was sent off for stamping on United’s Ander Herrera when the Spaniard slid in to tackle the Liverpool skipper.

Gerrard would later apologise after the game for his challenge as Liverpool eventually lost 2-1 to United.

Another quick red card against Manchester United, Reading midfielder Dave Kitson didn’t even touch the ball when he made a horror challenge on Patrice Evra in 2007. Kitson was substituted on at Old Trafford and instantly clattered through Evra with his studs raised dangerously high, hitting the Frenchman in the shin and consequently given his marching orders.

Who Has the Fastest Red Card in Football?

Former Sheffield United player Keith Gillespie holds the record for the quickest red card in the Premier League with an unbeatable zero seconds after he was sent off for elbowing Steven Hunt when United met Reading F.C. in 2007. Gillespie had been substituted on as the ball was out of play for a throw-in, before the ball could be reintroduced into play, the Sheffield man clashed with Hunt by elbowing him in the face and therefore receiving a red card for his challenge.

Although Gillespie was on the pitch for 24 seconds before receiving his marching orders, as the ball was never reintroduced into play from the throw-in, he technically was sent off after playing zero seconds of the match.