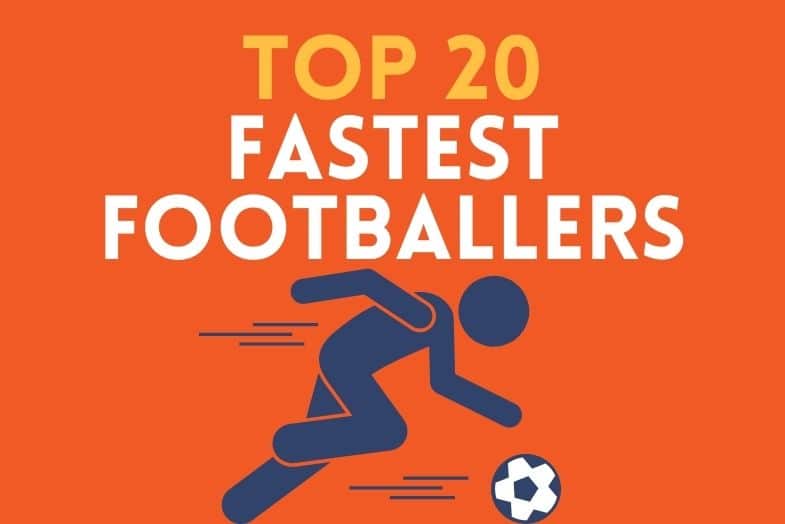 Many believe that what separates the top football players in the world from the average Joe is their athleticism. There are amateur footballers around the world with a great touch, superb finishing or who can spot a pass, but not so many who can do it while sprinting at full pelt. Or, at least, not many who can do it well.

Many of football’s elite players are, quite simply, rapid and they would smoke most of us in a race. Other football players might be short but make up for it with incredible endurance, like N’golo Kante, or great height and dominance in the air, like Peter Crouch.

But in a sport filled with incredible athletes, which ones are the fastest? We have gotten our speed guns out (not literally) and tracked who are the fastest football players in the world for 2022.

Who is the Fastest Player in Football?

Two players have recorded the fastest running speed in football. They are Kylian Mbappé of PSG and France, and Adama Traore of Wolves and Spain. Mbappé and Traore have both recorded the same top speed of 38 km/h (23.61 mph).

Anyone who has watched these two players in action will know just how quick they are and why they are so hard to defend against. Mbappé is one of the world’s greatest players and Traore has been terrorising Premier League defences since joining Wolves in 2018. No defender wants to see either of these players running towards them with the ball, or blasting it past them and out of sight.

Both of these players are so quick they ran faster than Usain Bolt when he broke the 100-metre sprint world record. Bolt recorded a top speed of 37.58 km/h, according to Britannica, while Mbappé and Traore’s top speeds hit 38 km/h.

Who’s the Quickest Player in the Premier League?

Adama Traore takes the title of fastest player in the Premier League with a top speed of 38 km/h (23.61 mph). Just lagging behind Traore to round out the top three fastest Premier League players are Manchester United’s Mason Greenwood and Aaron Wan Bissaka, both at 37.59 km/h (23.36 mph).

In fact, Manchester United has many players among the fastest in the Premier League but as we know, fast players aren’t the only ingredient of a successful football team.

It does help, though, and for teams looking to play a counter-attacking system, speed is essential. Having a slow player leading your counter-attack, or pressing system, would not be a great idea and certainly wouldn’t be playing to their strengths.

Who is the Fastest Player on FIFA?

FIFA 22’s fastest player is Kylian Mbappé with a pace rating of 97. He is closely followed by Wolverhampton Wanderers’ speedster Adama Traore, pace 96, and Bayern Munich’s Alphonso Davis, also pace 96. Daniel James of Leeds and Achraf Hakimi of PSG round out the top five fastest players on FIFA 22.

In the video game franchise, speed is one of the best attributes to look for and these players will all make welcome additions to any Ultimate Team. Combine all five and you’re looking at counter-attacking goals galore!

In a sport that requires a lot of running, it’s no surprise that having a few speedsters on your team is an asset. The likes of Kylian Mbappé are about more than speed, however, and the French star combines excellent finishing, dribbling and awareness. It’s no surprise, then, that as his contract begins winding down at PSG the biggest teams in the world are doing whatever they can to sign the forward.

On the flip side, his speedy equal, Adama Traore, is known mostly for his raw speed but other aspects of his game not being so sharp. He is still an elite player who has represented Spain at international level, but with a bit more end product he could be as good as the Frenchman.

With three of the top five fastest players in the world, Manchester United looks set to have a very healthy future. Their next door neighbours, Manchester City, have a few speedy players of their own, with Phil Foden and Kyle Walker both representing the Citizens in the top 20.

Despite this supposed physical edge, football is more than just speed and having the biggest, fastest players doesn’t guarantee success. Pep Guardiola’s Barcelona is a great example of players that weren’t the biggest or fastest but their skill and intelligence helped them conquer all before them.