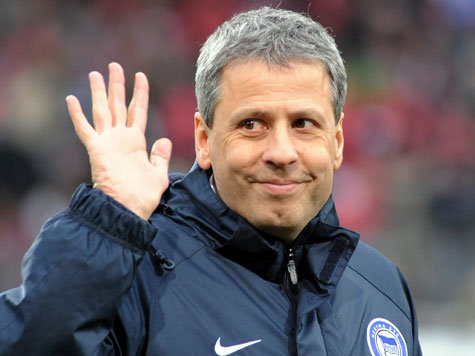 Every Tom, Dick and Harry has been linked with the Everton job since Ronald Koeman’s dismissal in October, with the Toffees struggling to identify and land a candidate they like.

The problem comes down to a question of priorities: Should the Blues be playing it safe and appointing a manager that will steer them well clear of a relegation battle (a Sam Allardyce)? Do they want a long-term project manager that will make steady, if unremarkable gains (a Sean Dyche)? Or, should they throw a curveball and appoint an exotic manager in the hope of disrupting the status quo (a Marco Silva)?

Diego Simeone was said to be majority shareholder, Farhad Moshiri’s, number one choice. And while the ambition to get someone of Simeone’s calibre is commendable, talk is cheap and there’s no way Simeone would ditch Atletico Madrid and risk his considerable reputation for a team languishing in the lower echelons of the Premier League. Could he be tempted to Goodison in the future? Maybe. But progress needs to be made at the Merseyside club first.

What do Everton need?

Everton have an increasingly ambitious fanbase, brought on in large by their 22-year trophy draught.

Let’s not forget that Everton are one of the most successful clubs in English football history, landing nine top flight titles, five FA Cups and a European title – a haul only bettered by Manchester United, Liverpool and Arsenal.

That outlay looks even less impressive when you consider that West Brom, Brighton, Watford and Liverpool also invested over £40 million.

And while Moshiri’s investment is more than welcome – and needed – at Everton, the club are not about to “do a Man City” or “a Chelsea” – at least from a financial perspective.

When the two aforementioned clubs had their own significant investments, they blew away the rest of the league with the transfer fees and wages they spent to land their targets. Everton maybe competing financially now, but that won’t help them close the gap.

So, with Everton not about to blow apart the Premier League financially, it means they need to over-achieve – based on their current squad and financial situation – if they want to crack the top four or more.

Even an illustrious managerial appointment like Carlo Ancelotti would probably be a grave error. Sure, he’s “winning” manager, who has won league titles England, Italy, France and Germany, as well as three Champions League titles. But to give that record some more context, those league titles have come at Chelsea, AC Milan, PSG and Bayern Munich – who were hardly floundering before he came. The shine is taken off Ancelotti even more when you consider he failed to land a league title at both Juventus and Real Madrid. This isn’t intended to disrespect Ancelotti – who has had incredibly successful career as both a player and manager – but he isn’t the over-achiever that Everton desperately crave.

When it comes to over-achieving managers, there are three names that stand out in Europe right now: Diego Simeone, Graham Potter and Lucien Favre.

Diego Simeone, as previously discussed, would be an incredible appointment for Everton – but it’s not going to happen any time soon.

The story of Graham Potter’s Östersunds, rising from the Swedish fourth tier to damaging big egos in the Europa League has been well-covered in recent months, and it looks like the innovative Potter could be set for big things. But he’s still in his first job – which is an incredibly unique one at that – so it would be a huge risk for Everton to go after him just yet.

That leaves us with Lucien Favre – the perennial over-achiever.

Lucien Favre was actually linked with the Everton job prior to Ronald Koeman’s appointment in 2016. However, the Swiss manager – then unemployed – grew tired of waiting on a response from Everton (just ask Big Sam how that feels), and instead took the top job at Nice.

So, just who is Lucien Favre? And why could he be the perfect man for the Everton job?

Favre is 60 years old and enjoyed a decent playing career in the Swiss and French leagues, earning 24 caps for his native Switzerland.

After retiring, he moved into coaching, and got his first managerial appointment at Yverdon Sport in 1997, who were struggling at the foot of the second-tier of Swiss football. Within two years, he guided the club not only to promotion, but also to what is still the club’s highest-ever league finish: fifth place in the Swiss Super League – his first over-achievement.

This drew the attention of Servette, who had finished three places below Yverdon Sport that season. In his two seasons in charge there, Favre took Servette to sixth and then fifth-place finishes (while Yverdon were relegated), but his greatest achievement there was winning the club the Swiss Cup for the first time since 1984 and thereby qualifying for the UEFA Cup. A great European run followed, with the Swiss side knocking out Slavia Prague, Real Zaragoza and Hertha Berlin, before crashing out following defeat to Valencia in the last 16.

Zürich, who had finished three places below fifth-place Servette, swooped to poach Favre that summer, tasking him with returning the club to former glory after back-to-back eighth placed finishes. His first two seasons saw Zürich finish fifth and sixth (as well as securing a Swiss Cup), before winning the Swiss Super League in both 2006 and 2007 – their first league titles since 1981.

A move to Hertha Berlin followed for Favre. He finished tenth in Bundesliga in his first season before guiding them to a shock fourth placed finish the year after. Yet another over-achievement. So why wasn’t every top club in Europe look to grab him?

What followed is a typical pattern of how Favre’s career has subsequently followed: After achieving a great finish, the board sold all the club’s best players, didn’t re-invest and then struggled the following season.

Just five months after guiding them to European football, Hertha sacked Favre with his side bottom of the league. Hertha’s fortunes didn’t improve, and they were relegated at the end of the season.

After more than a year away from the game, Borussia Mönchengladbach, who were sitting bottom of the Bundesliga table with just 16 points from 22 games, took a chance on Favre in February 2011. Favre turned the club around and secured top-flight safety after a relegation play-off win over Bochum at the end of the season.

Mönchengladbach: Bottom of the League to Champions League in 15 Months

In his first full season in charge, Favre turned Mönchengladbach from relegation certainties to Champions League football, securing a fourth-place finish in 2011/12 – the club’s highest since 1986 – in a season which included home and away wins over Bayern Munich.

Mönchengladbach slipped off somewhat in the following seasons, but still securing respectable eighth and sixth placed finishes despite losing star players such as Marco Reus. In 2014/15, Favre led Mönchengladbach to a hugely impressive third place finish – guaranteeing them a spot in the Champions League group stages.

After struggling in the team’s opening five games the following season, Favre resigned as Mönchengladbach boss.

It seemed like this was the moment Favre would secure a “big job” – and most likely in England. But the offer never came – even with Everton sniffing around in 2016.

Instead, Favre moved to Nice, who had just finished in fourth in Ligue 1, but had lost manager Claude Puel to Southampton, as well as key players: Hatem Ben Arfa and Nampalys Mendy.

With many expecting them to slip down to mid-table or worse, Favre guided Nice to a third-place finish – with 15 more points than the season before – keeping up with PSG and Monaco in an unexpected three-way title race.

That familiar thing happened to Favre in the summer just gone though: Nice cashed in on their best players and struggled to replace them. The team are currently languishing in mid-table.

Could Favre Over-Achieve with Everton?

Favre may still be at Nice – but an approach from Everton would surely appeal to him right now.

Favre is a quirky individual – judged by some to be an eccentric – and likes to play fast, attacking football built on the idea of changing tempos throughout the game. At Mönchengladbach, he also enjoyed great success with his side’s brand of counter-attacking football.

Crucially though, Favre loves to bring young players into the first team – usually at the expense of under-performing, bigger names.

Everton certainly aren’t short of promising players, with Tom Davies, Ademola Lookman and Dominic Calvert-Lewin – to name just a few, all showing glimpses of their potential.

So could Favre see this as an opportunity to mould a team in the coming years, with Everton’s need to sell players to pay the bills no longer a problem?

There’s been no reports of any contact between Everton and Favre in 2017, but perhaps there should be.