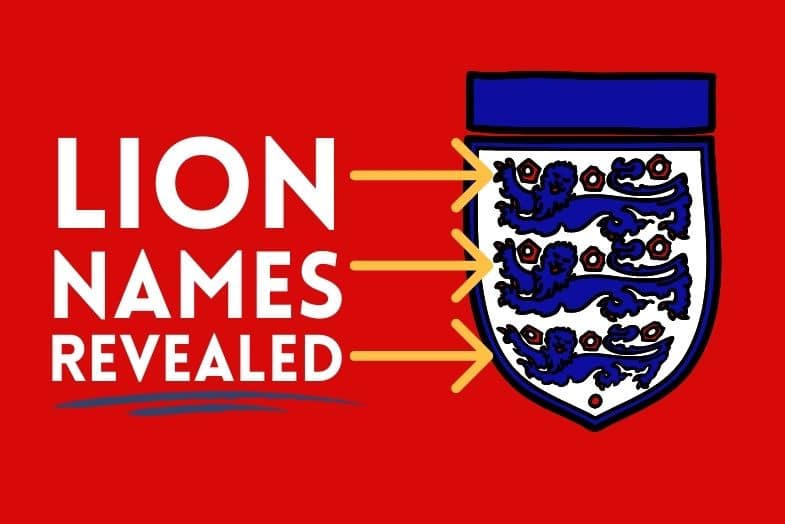 Since first being used in sport by the England international team in 1872, the three lions on the England badge have been a consistent symbol in the world of football with generations of English players all hoping to one day wear the proud symbol on their chest.

Used as the official symbol of the Football Association, the three lions represent not only the English football system but the historical journey of how the country grew to adopt the iconic badge and how they were named after important figures in British/French history.

But why do England use the three lions as their symbol? And what are the names of the lions?

Why Do England Have Three Lions on the Shirt?

The England national team wears the three lions on their badge because it is the official symbol of the Football Association (FA), the governing body of English football.

The England national team is consequently nicknamed ‘the Three Lions‘ because of the three felines featured on the badge on the kits worn by the players.

This symbol has been used since 1872 after England played their first international fixture against rivals Scotland, the lions were used throughout English history as a proud, fierce, and strong image.

What Do the 3 Lions on the England Badge Stand For?

The three lions represent the three main realms that were ruled by the Plantagenets in the late 12th century – a royal house in France that held the English throne from 1154 to 1485.

The three realms were made up of the Kingdom of England, the Duchy of Normandy and the Duchy of Aquitane where constant battles were fought over territories between royal families.

Are the 3 Lions Really Leopards?

Although clearly shown as lions in today’s symbols, the original design for the three cats was described as leopards during the 12th century. This was because the image of a lion rampant (standing straight with forepaws raised) was referred to as a lion, whilst a lion passant guardant (walking with head turned) was called a leopard in the middle ages.

This was a technical heraldic distinction in middle ages coat-of-arms as spotted big cats were never used on a nation’s official symbol.

The people of England would refer to the walking lion as a leopard until the late 1300s, however, French heralds would continue to call them leopards and sometimes referred to the English as ‘the leopards’.

What Are the Names of the Three Lions?

The three lions are named Rollo, Mayne and Aquitane with each having a historical background behind their naming.

Rollo was named after a famous Duke of Normandy who ruled the region between 911-928. Rollo’s great-grandson, William, would later invade England and form their royal dynasty. He would eventually be named William the Conqueror.

The second is called Maine after a country that was added to the Normandy empire. The third is named Aquitaine, a name added by Henry II to represent the Duchy where his wife was born.

What is the Origin of Three Lions?

Originating from the 12th century, the three lions on the England badge grew from the union of the royal families’ use of the lion symbol after King Henry I, Geoffrey Plantagenet, Count of Anjou and King Henry II all used a lion on their crests.

King Richard I of England, better known as ‘Richard the Lionheart’, would eventually use all three of the lions as his official symbol to create the foundations for the three lions badge we see today.

Under the lionheart’s rule, the three lions were used on a scarlet background as a symbol of the English throne. The three lions have been used in the Royal Arms ever since.

What Do Lions Represent for England?

Whilst the three lions originated from the three realms of the Plantagenets royal house, the symbol of the lions themselves were used to invoke fear into enemies before the battle.

Standards with three gold lions were carried into battle to inspire the troops and strike fear into the enemy, a tactic made famous through Richard the Lionheart who crusaded against Muslamic cities in the Near East.