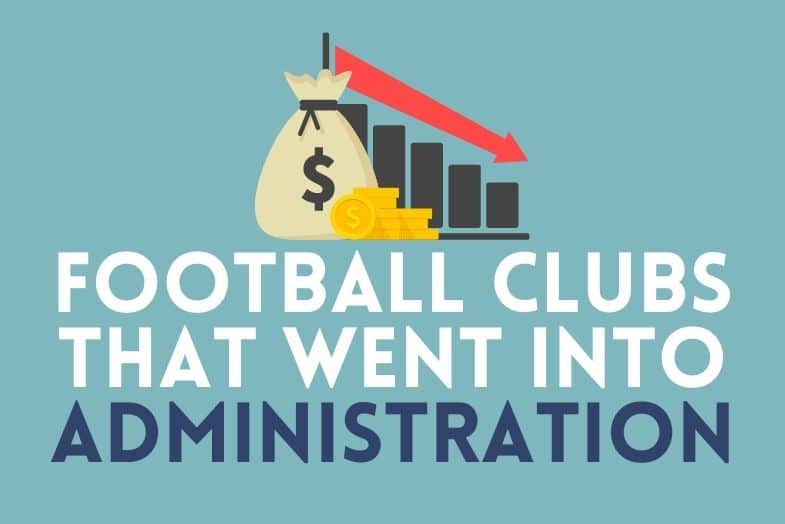 Football clubs that are footloose and fancy-free with their finances know that the threat of administration looms large. So it’s up to them to do what they can to balance the books. The goal of administration isn’t to punish the fans but to ensure that glory-coveting owners spend their money wisely.

Taking on debt in football isn’t something new but it comes at a risk and if those debts grow too large then sanctions must be put in place. Administration can feel like the death nail for a club when they enter it but history has shown that this isn’t always the case. Let’s look at what entering administration means for English football clubs.

Why Do Football Clubs Go Into Administration?

Going into administration in footballing terms is when a club is no longer capable of paying off its existing debts. Clubs can choose to enter administration at this stage, where they can be shown to be insolvent by a court. This, in effect, declares a club bankrupt.

In declaring bankruptcy, the club formally recognises its inability to pay off its debts which may force a sale or the club could stop operating completely.

What Happens if a Club Goes Into Administration?

A club entering administration must try to pay off its debts. Accountants are placed in positions of power in the club, gaining control of everything except picking the team and coaching players. Football-related debts like player and staff wages and outstanding transfer fees must be paid off first.

If a team is relegated when entering administration the point deductions are dished out the following season, if they stay up they are hit with the deduction. This same-season points deduction may still ultimately relegate a team.

Biggest Clubs to Go Into Administration

Although bigger teams have more income, they are not immune from going into administration. In England, some of the biggest teams to enter administration include Leeds United, Crystal Palace, Portsmouth, Wigan Athletic and Derby County.

Other big name football league teams entering administration include Bournemouth, Southampton, Leicester City and Bolton Wanderers. Outside of England, big teams like Rangers have had off-field financial struggles, while Barcelona faced major problems in 2021 due to La Liga’s financial restrictions.

What Happens if a Football Club Goes into Liquidation?

Liquidation is the next stage after administration and it’s terminal for football clubs. In essence, a team going into liquidation is bankrupt and is expelled from the league it is playing in as it can no longer honour its fixtures.

There have been several examples of English clubs in financial peril that couldn’t claw their way back to solvency. The most recent example is Bury FC after it was expelled from the EFL in 2019. Other examples of liquidated clubs include Chester City FC, Macclesfield Town FC, Aldershot FC and Maidstone United.