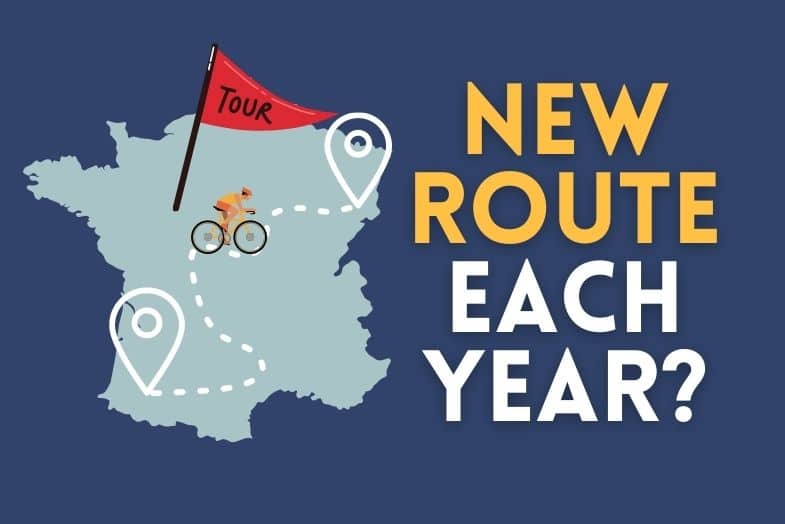 The Tour de France is one of the most famous races in the world. It’s right up there with the Olympic 100-metre final, the Grand National and the Monaco Grand Prix as the races most people watch, whether they are sports fans or not.

But, unlike those other famous races, the Tour de France could be described more like a marathon than a sprint. In fact, for those partaking it probably feels like a never-ending series of marathons.

Given that it’s called the ‘Tour de France’ you might think that the race is held in the same place every year. After all, the clue is in the name, isn’t it? Let’s look at whether the Tour de France route changes each year, if it’s the same distance and whether it’s only held in France.

Every year the Tour de France route is changed from the previous one. This might be changing up where in France the riders race or seeking alternate locations. However, while the route changes, the format remains the same.

The format that returns year on year includes time trials and a passage through the Pyrenees mountains. Finally, each year the final stage culminates with riders racing toward the finish line on the Champs-Élysées in Paris.

Is the Tour de France Different Each Year?

Yes, riders who compete each year will notice that the routes they take change each time. While the Tour de France route might be changed up each year, there are always 21 stages for the riders to compete in. The locations and lengths of each stage may differ but the number does not.

Two consecutive Tour de France races are rarely the same as the configuration of stages and distance are open to change. Each year the race may play to the strengths of different riders, from more frequent hill climbs to sprints and flat sections.

Where Does the Tour de France Start?

Known as the Grand Départ, the start of the Tour de France has typically changed each year the race has been held since the 1950s. In fact, as the years go by it’s more common for the Tour de France to start in a city outside of France to generate more interest in the race.

The location of the Grand Départ is determined more than a year in advance. For example, the 2022 Tour de France starts on July 1 in Copenhagen, Denmark, but the following year it is already known the Grand Départ will be from Bilbao, Spain.

Who Decides the Route of the Tour de France?

The Tour de France route is determined by the Race Director, sometimes known as Tour Director, and the Lead Course Designer. In 2022, those individuals are Christian Prudhommeand and Thierry Gouvenou.

They are the ones who decide which route the race will take, where the Grand Départ will be and how to get from there to the Champs-Élysées. While there is a whole procession that looks after the Tour de France, including input from the UCI (Union Cycliste Internationale), racing teams and the ASO (Amaury Sport Organisation), those two men decide where the racing goes.

Considerations for the route include difficulty, opportunity to bring the sport to new eyes and the commercial benefits of doing so. The Yorkshire Grand Départ in 2014, for example, is celebrated as one of the finest the Tour has ever experienced.

The Tour de France is a more global event than it was during its infancy. Known as the Grand Départ, riders now start the race in various European cities and locations to bring more eyes and interest to the sport. But while elements are international events, certain routes and stages stay in France.

The first Grand Départ outside of France came in 1954, when Amtserdam kicked the famous race off. Since then, various European cities have had the prestige of the Grand Départ, including Cologne, Basel, Dublin, London, San Sebastian and Brussels.

How Long Does the Tour de France Last?

The Tour de France is one of the most traditional races in the cycling calendar. Its 200 cyclists take part in 23 days of racing across 21 stages. Typically, the race is over 2,000 miles long across towns, cities, mountains and villages of France.

The riders are afforded just two rest days over the 23 days of racing in the Tour de France, making it one of the most intense sporting events of the year. It’s little surprise with such a gruelling task that triumphant riders, like Bradley Wiggins, help to change the sport and put cycling on the map.

Due to the ever-changing stages and routes, the Tour de France is not always the same distance each year. Some years the race is shorter than others but they are generally all above 2,000 miles. In 2022, the Tour de France will be contested over 2,068 miles.

The longest Tour in recent times came in 2014, when it was held over 2,275 miles. However, it’s not all about distance when it comes to the Tour de France. Riders are pushed to their limits in a variety of race types, from time trials to sprints.

The lengths of stages are different each time, so those who are better at longer distances can be up in some races and down in others. Ultimately, the most well-rounded cyclist is the one who will finish the 23 days as the Tour de France champion.