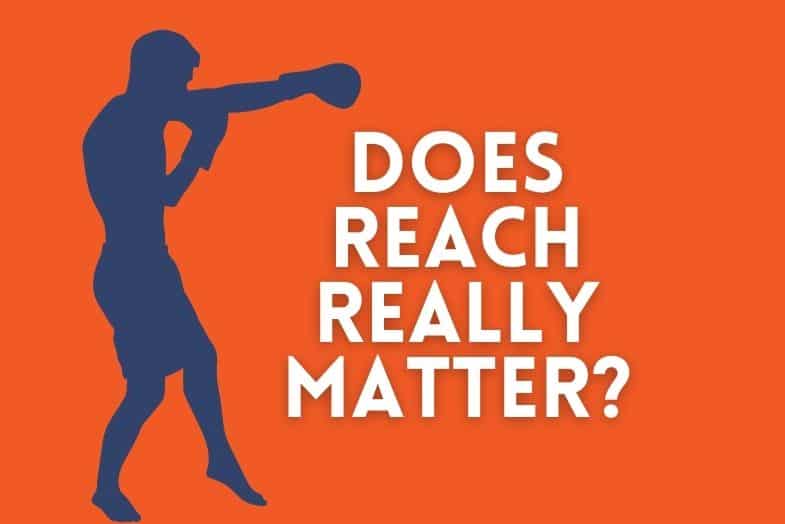 While superior technique and fitness are key components of what makes a high-quality fighter, it is hard to ignore the physical advantages that many top fighters are naturally gifted with.

Often seen as the most desirable physical attribute is a fighter’s reach, which can give athletes in boxing and MMA a distinct advantage in any fight.

Alongside age, weight, and height, reach is always factored in as a considerable bonus to the analysis before any professional fight.

But what is a fighter’s reach? And how much of an advantage does it offer to fighters?

What is “Reach” in Boxing/MMA?

Reach is the description for the total length of a fighter’s arms from one fingertip to the other, often known as a fighter’s wingspan.

Reach is not focused on arm length as this only measures from shoulder to fist in one arm and therefore not a fighter’s overall reach from both arms.

The current longest reach in MMA belongs to Welterweight Derrick “Kill Shot” Lotton who holds a reach of 84 inches (213.4cm).

How is Reach Measured?

A fighter’s reach is measured in inches from fingertip to fingertip when the arms are held parallel to the ground. As reach factors in the full length of a fighter’s ‘wingspan’, it is a key measurement in sports like boxing and MMA.

Interestingly, UFC fighters statistically have 2-3 inches longer reach than the average boxer. The average UFC fighter at six feet tall will have a reach of 74 inches while the average reach in boxing is 71 inches.

Is Reach a Big Advantage in a Fight?

A greater reach is considered to be a big advantage in a fight as it allows the fighter to land blows from a greater distance while using this wider distance to avoid receiving blows from their opponent.

Taller fighters often have the greatest reach, allowing them to gain a physical advantage immediately over a smaller opponent. Although reach offers this advantage, it does not guarantee victory in both boxing and MMA.

If a shorter fighter with a lower reach can close the distance between themselves and their opponent, they can nullify the reach advantage quickly. A smaller fighter also requires less energy to move around the ring, which can give the fighter an advantage in terms of endurance.

A greater reach is ultimately a taller fighter’s biggest advantage if they can maintain the distance between themselves and the opponent to land and avoid receiving blows from a ‘safe’ distance.

Does Reach Matter in Boxing?

Reach plays a very important role in boxing as boxers with a longer reach often have the advantage during a spar because they can land blows from a further distance while maintaining space from their opponent. While there are many factors that come into play, reach can be a key component in deciding the outcome of a boxing match.

As greater reach is a physical attribute, this can be a problem for many smaller boxers, especially if they can’t close the distance properly and nullify the advantage of their opponent’s longer jab.

Does Reach Matter in MMA?

While reach is a considerable advantage in any fight, the diversity in MMA fights can allow many fighters to nullify the reach by closing the distance through the wrestling aspect that is unseen in other combat sports such as boxing.

Despite reach being easier to counter in MMA, the ability to use a longer reach to trade blows from a greater distance will always give an MMA fighter a distinct advantage in the ring.

Perhaps one of the greatest benefits of having a longer reach in MMA is that a fighter can avoid blows from their opponents easier, potentially forcing the opponent to attempt a close combat style as they do not have the reach advantage.