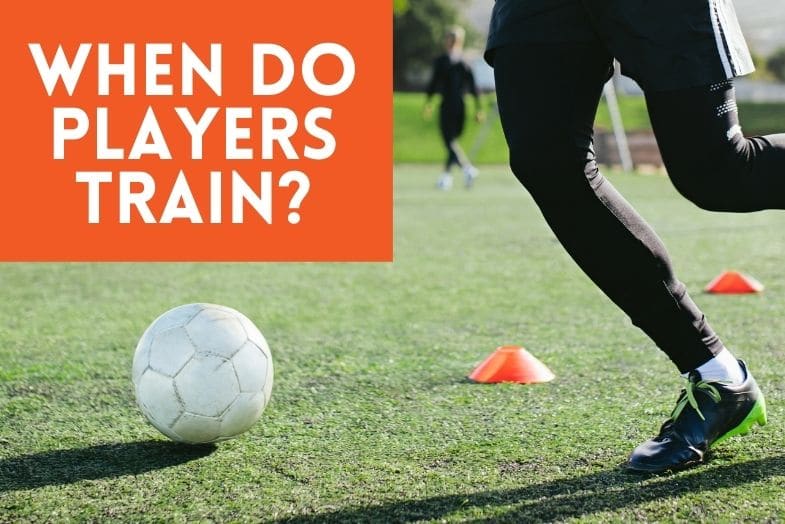 So much of the focus on football is on what happens on the pitch on the all-important match days.

But the real hard work arguably takes place away from the public eye on the training fields.

So, how often and how hard do footballers train?

Do Footballers Train Every Day?

Footballers do not train every day – it would be physically and mentally impossible. Instead, top footballers today have a tightly controlled schedule consisting of a combination of training, physical workouts, tactical work and, importantly, rest.

Their schedule also depends on how many times they are playing in a week. If they have seven days between matches (which is quite unusual nowadays given the packed domestic, European and international schedule) then they may even have a couple of days off during the week.

Do Footballers Train the Day Before a Match?

Footballers will tend to train the day before a match, but this won’t be a high-intensity session. Instead, they will have a light training session and then most managers like to have a tactical session looking at how they will approach the game against the next-day’s opponents.

In European competition, such as the Champions League, the visiting sides are entitled to hold a training session in the home side’s stadium the day or night before a match to acclimatise them to the surroundings. These sessions generally only involve light training as well however.

Do Footballers Train on Match Day?

Footballers generally do not train on match day. Their time is spent instead relaxing, taking on board the proper pre-match meal (most big clubs now have a nutritionist on their staff) and preparing themselves mentally for the match ahead.

Obviously, some away matches involve lengthy journeys on match day, and while the top sides have luxury coaches or even private planes at hand to get their players to matches in style, down the football ladder there is no such decadence.

This means that at semi-pro or amateur levels, players who have stepped off a coach after a long journey may need to perform some sort of extra light training to loosen up before kick off on match day.

What Time Do Professional Footballers Train?

Traditionally, footballers have trained in the morning, often beginning sessions around 10am. While years ago a one-session day was the norm, in today’s football world, professionals will often have double sessions in the morning and the afternoon.

Some top clubs, including Manchester City for example, even have sleeping areas within their training complexes for players to rest between training sessions.

Gone are the days where even players at top clubs enjoyed training in the morning and then had the rest of the day to indulge themselves in pubs, betting or other unhealthy habits.

Sports science has never had a greater impact on football and footballers than it does now, with players’ every move on the field, training pitch and even while at home monitored to ensure they are at peak fitness.

How Long Do Footballers Train a Day?

A typical two-session training day for footballers could see them on the training pitch for between four and six hours a day, although obviously the training will not be of a high intensity for the whole of that time.

At most clubs, the earlier session might be used to “warm up” the players and to concentrate on physical fitness, with the later session more tactical, with a focus on the match ahead.

However, given the busy schedule common in professional football nowadays, if a club is regularly playing three matches a week then training may well be curtailed for the regular first-eleven starters, with the focus on light workouts, rest and recuperation instead.