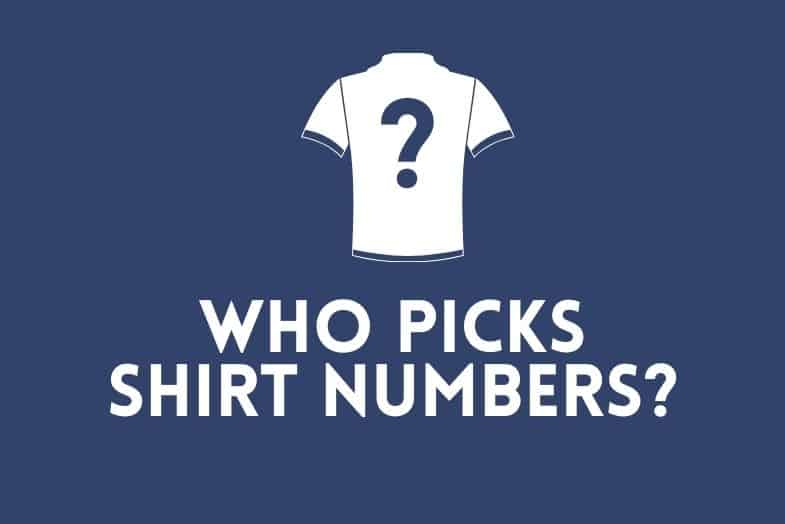 Since being introduced to English football by Arsenal and Chelsea in 1928, kit numbers have rapidly become iconic symbols across the world.

Who can forget the greats to have worn the famous number 10 on their backs? From footballing legends such as Pele and Diego Maradona to more recent heroes like Lionel Messi and Wayne Rooney, a kit number can run parallel with a player’s growth to become one of the best in the world.

Players developing to become the greatest have chosen specific numbers, while some kit numbers have been given special meanings from situations both on and off the football pitch.

But do footballers choose their kit numbers? And can they choose any number at a club?

How Are Numbers Chosen for Footballers?

Although players can request a specific kit number from the club, new players will often have a choice of the kit numbers available as part of their negotiation deal when signing for the club.

Numbers on football shirts were originally worn in professional matches in 1928 when Arsenal played Sheffield Wednesday. To represent their 2-3-5 formation, players were given numbers from 1-11 to represent their position on the pitch.

While kit numbers can help referees and supporters distinguish between the players on the pitch, the evolution of kit numbers has meant that many numbers now hold a deeper message or meaning.

Do Footballers Choose Their Number?

Footballers are given the option to choose from the remaining numbers available as part of the negotiations when signing for a club, more often than not they will choose a lower number as the lowest numbers traditionally make up the starting squad.

While the numbers 1-11 were originally used for players’ positions, this system was gradually abandoned and players were able to have a greater say in their kit number.

In 1974, Argentina famously ditched the positioning system for kit numbers and instead opted to give out numbers based on alphabetical order for the surnames – except for the goalkeepers who received the numbers 1, 12, and 21.

This idea was also abandoned in the 1982 World Cup when Diego Maradona, who alphabetically should have been the number 12, expressed a strong desire to be the number 10. The number 10 is now heavily associated with Maradona, one of the greatest to play the game.

Can Footballers Choose Any Number?

Despite players traditionally only being able to choose a number that is not already taken, some players have requested to trade numbers with players if they feel strongly enough about the meaning.

A famous example of a high-paid player demanding a specific number is former West Ham player Paulo Futre, who refused to wear the number 16 as he desired the famous number 10 kit.

Manager Harry Redknapp refused his request, leading to Futre refusing to play until he received the number 10 – the player was successful and eventually received the kit number he desired.

Although Premier League rules state that a player must retain his allocated kit number throughout the season, players can still be allocated new numbers before the commencement of each season.

Before the season starts, a different shirt number must be given to each member of a Premier League first-team squad with the player’s squad number also appearing on the front of the left leg of their shorts.

Although players are often able to make money through sponsorships deals on their kits, the official league rules can often prevent them from freedom when choosing a kit number. In 2017, Portuguese midfielder Renato Sanches was denied his request for the number 85 at Swansea as the Premier League cited a rule that squad numbers must be consecutive and close to the current highest number at the club. Sanches eventually received the number 35 as it was closer to the other players’ numbers.

However, high numbers are not unusual in the Premier League with the highest number ever worn in the league is currently the number 78 shirt worn by former Manchester City player Jose Angel Pozo in 2014.