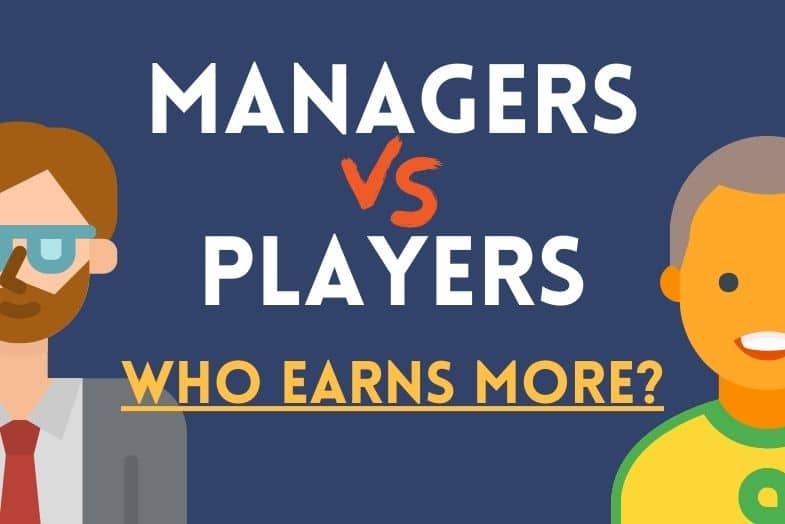 In this day and age, coaching a professional football team might be one of the most physically and mentally exhausting jobs in the world.

While the athletes finish their morning training session and head back home to enjoy the rest of their day, the tactician often remans in his office, trying to lay out plans for the next matches and taking care of other tasks that the players don’t have to be bothered with.

Moreover, once the results go south, it’s the manager who often pays the price with his head appearing first on the chopping block. On the contrary, it’s the star players’ faces that steal the headlines following a great achievement.

So who in their right mind would want to become a football manager?

Well, perhaps the lucrative wages sort of explain it.

So how much do football managers get paid? How does it compare to the players’ salaries? And do they get bonuses as well?

Let’s find out who’s getting the better deals.

How Much Do Football Managers Get Paid?

Reminiscently to football players, managers get paid based on their reputation, their former achievements and the club that they work at amongst other factors. The figures can be extremely varied between one manager and another, even in the same league.

For instance, Manchester City’s Pep Guardiola is the highest earner amongst Premier League managers, collecting around 20 million pounds per year. On the other hand, Sheffield United’s Chris Wilder was the league’s lowest earner in 2020/21 with a yearly wage of 675,000 pounds.

However, the Premier League is the top of the echelon in the sport today, and therefore, comparing EPL numbers to lower leagues wouldn’t make sense.

Nevertheless, if we compare the wages earned by the managers of England’s top tier to those collected by Serie A coaches (another top European league), we’ll notice a significant gap between the two based on the reported salaries from the 2020/21 season.

After analyzing the table above, we can pick up the following conclusions:

1- Teams who are at the top pay more handsomely, mainly because they have the means to acquire the best managers of the world, the likes of Guardiola, Jurgen Klopp and Antonio Conte.

2- Experience and past achievements play a key role in determining the salary, which partially explains why Juventus (who dominated Italian football at the time) were only 7th on the list after appointing a rookie tactician in Andrea Pirlo.

3- Unsurprisingly, clubs that feature in richer leagues will pay larger wages to their managers. Conte aside, the coaches of top Serie A clubs earn less than the majority of the EPL’s midtable managers.

Do Managers Get Paid More Than Players?

More often than not, a football manager earns more than the majority of the players at his disposal – if not all of them. However, this isn’t always the case, as it happens that a club appoints a manager who lacks experience or an elusive CV, and his wages could dwarf in comparison to the players’ salaries.

Perhaps Pirlo’s case at Juventus in 2020/21 can serve as the prime example for the last case. The rookie manager earned less than 2 million euros per season, while the Bianconeri had the one and only Cristiano Ronaldo (31 million euros per year) on their wage bill. Even the club’s benchwarmers earned more than the Maestro.

Nevertheless, this remains a rare case, and the end result proves why appointing an unexperienced manager for one of hottest seats in European football wasn’t the wisest of decisions.

In most cases, a top club will do its best to appoint a world class manager to lead the troops, and the commander will be expected to earn more than his soldiers – or at least the majority of them.

In our case study, we’ll adopt the English Premier League as our example when comparing the wages of football managers and their players, once again based on the 2020/21 season.

Based on the table above, the vast majority of the 20 Premier League managers who started the 2020/21 season earned more than their average player during that season. Only five coaches earned less according to the stats assembled between Soccer Prime and Sporting Free.

Do Football Managers Get Bonuses?

Reminiscently to player contracts, a football club often adds one or more bonus clauses to the manager’s contract to further motivate him. These bonuses are usually related to achieving the team’s objectives on the pitch (winning trophies, earning promotion, avoiding relegation…) or they can be loyalty bonuses.

According to Si.com, Pep Guardiola’s Manchester City contract includes a bonus worth 10 million euros for winning the Champions League, as well as a loyalty clause that would see him earn a full year’s salary if he decides to remain at the Etihad Stadium until the end of his deal in 2022/23 rather that opting for an early termination.