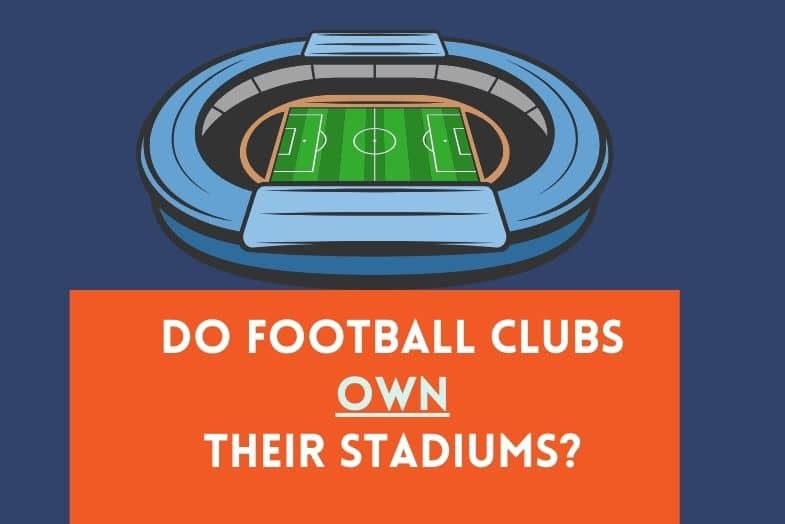 Many people assume that every football club owns the ground it plays in and calls home. However, this is not always the case. The ownership groups and models of football clubs can vary widely. And to get to the bottom of who actually owns what can take some digging!

In this article, we will explain the complexity of stadium ownership and find answers to the important questions!

A wide range of landlords and ownership groups can own football stadiums. This can range from football clubs to property investors to private holding companies and to public-funded local councils. The owners or shareholders of the club can also own part of all of the stadium freehold.

Who owns a football club can be as equally diverse as who owns a football stadium. Teams like Barcelona, Bayern Munich and Real Madrid are funded by fan ownership groups. And in these cases, the supporter group also owns the stadium.

Do Football Club Owners Own the Stadium

Do Premier League Teams Own Their Stadium?

Many Premier League teams own their stadium. But many also lease it from the freeholder of the ground which is usually a separate company. Owners and/or shareholder groups may also own part or all of the stadium.

Football clubs may own a stadium jointly with another entity or club. This was the case with one of the most unique football stadiums in the world, the Allianz Arena. Initially, FC Bayern Munich shared the ground with 1860 Munich. But in 2006, FCB bought the 1860’s shares to gain full ownership.

Do Arsenal Own Their Own Stadium?

Technically, Arsenal FC doesn’t own Emirates Stadium. The ground is registered to Arsenal Limited (Ltd). However, the team and the stadium are operated and owned by Kroenke Sports & Entertainment (KSE), a holding company of club majority owner Stan Kroenke.

Do Man City Own Their Stadium?

Man City lease the Etihad from the Manchester City Council. The area was originally built for the commonwealth games and converted into a football stadium in 2002. The city and the club split the cost of renovation and expansion of the club but City still leases the stadium to this day.

The stadium was originally named the City of Manchester Stadium but was renamed Etihad Stadium due or a sponsorship deal.

Anfield was built in 1884 and is one of the oldest football stadiums in the world. It was originally home to Everton until 1891 before they moved to Goodison Park. Since then, the stadium has undergone many renovations and has one of the largest capacities in England.

Also known as “The Theatre of Dreams”, Old Trafford is owned by the club and registered to Manchester United Ltd. The stadium is the second largest of its kind in the UK only surpassed by Wembley.

United have been playing in Old Trafford since 1910. However, from 1941 to 1949, the club shared a home with Manchester City at Maine Road. This was because Old Trafford had been damaged by bombing raids during World War Two.

Which Teams Don’t Own Their Stadium?

Many clubs in world football don’t own the stadium that they call home.

PSG has been playing in the Parc des Princes since 1973. The club is owned by Qatar Sports Investments which is one of the richest ownership groups in sport. However, the club leases the ground from the Paris City Council.

Chelsea FC is owned by billionaire Roman Abramovich. The club plays in Stamford Bridge in Fulham. Chelsea leases the ground from Chelsea Pitch Owners plc which is part of the club. In addition to owning the freehold, this group also owns the naming rights of Chelsea Football Club.

Whether we like it or not as supporters, world football is a business with a lot of money at stake. This means a wide array of individuals and corporations will always be involved. Fan-owned clubs are looking for trophies, while other ownership groups are seeking a return on investment.

Either way, clubs big and small may not even own their own football stadiums!