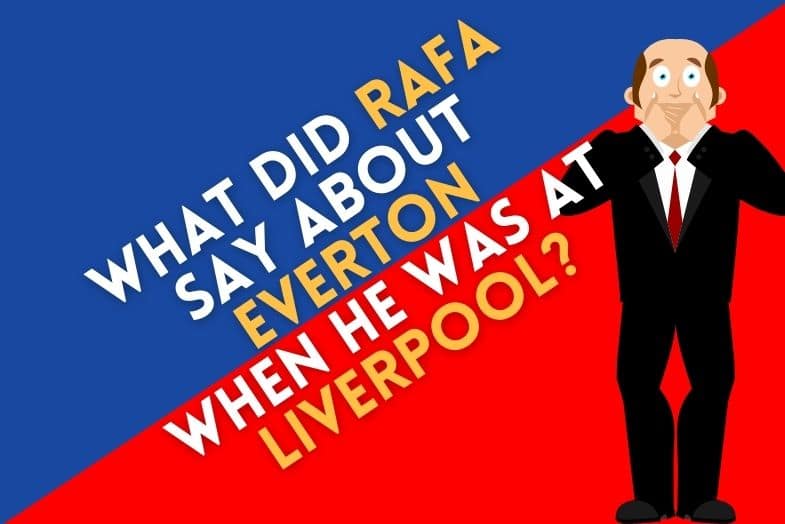 Rafael Benitez is a Premier League manager with some of the biggest trophies in world football in his collection. He has won the Champions League, Europa League, La Liga, FA Cup and Club World Cup with his teams.

Individually, Benitez has been named the UEFA Manager of the Year, La Liga Best Coach and European Coach of the Year.

His past success with Liverpool made him the enemy of Everton fans but Benitez did the unthinkable and agreed to manage the Blues in 2021. We’re going to take a trip into Benitez’s past to look at the facts and see what he said about Everton when he managed Liverpool.

Rafael Benitez first came on the scene for many Premier League fans when he took over as manager of Liverpool in 2004. However, those who kept a closer eye on La Liga than the average UK football fan would have known Benitez for his success with Valencia.

Despite competing with the likes of Barcelona and Real Madrid, Benitez overcame the odds and won La Liga twice in three seasons. He came to Liverpool and delivered a historic Champions League victory in 2005; which is often seen as one of the greatest sporting comebacks of all time.

Benitez stayed at Liverpool until 2010 and so began his globetrotting adventures as a football coach. The Spanish manager would lead the likes of Real Madrid, Inter Milan, and one of Liverpool’s biggest rivals during his time on Merseyside, Chelsea.

Later, Benitez would be welcomed back to the Premier League with Newcastle United and, most recently, to Liverpool’s local rivals, Everton.

Rafael Benitez did once call Everton a small club. This description occurred during his tenure as Liverpool manager following a derby match in 2007. Liverpool dominated the match but didn’t win thanks to Everton’s desire to play for a point, something that frustrated Benitez.

During the post-match interview, Benitez explained that Liverpool had difficulty breaking Everton down due to the team’s “small club” approach.

Benitez said: “We were trying but when you play with small clubs they defend deep and they [Everton] tried to do the same.” He inferred that many small teams go to Liverpool with no goal other than to defend for a 0-0 draw.

Benitez also said: “One team wanted to win and another didn’t want to lose.” He explained how difficult the derby proved to be, adding: “[It’s] Not easy when you have, maybe, eight players behind the ball.”

That description of Everton as a small club didn’t exactly go down well, especially considering the Merseyside team’s rich history in football.

Why Did Rafa Benitez Join Everton?

It was always going to be a hard decision but Benitez chose Everton because his family still lives in the Merseyside area. Benitez had always expressed his desire to live and work in the Premier League to be close to home. Once the opportunity at Everton presented itself, Benitez couldn’t say no.

In truth, the Toffees manager position was available in the summer of 2021 following the unexpected departure of Carlo Ancelotti. The Italian manager returned to Real Madrid in 2021 and so the search for his successor was on, despite Everton’s desire for ‘Don Carlo’ to remain in charge.

Benitez had left his managerial role at Dalian Professional in China at the beginning of 2021. That meant he was a cheaper alternative to other managerial candidates who were already employed. His past quotes about Everton were bound to come back to haunt him with his appointment as manager.

Did Rafa Benitez Apologise for What He Said About Everton?

During an episode of Monday Night Football on Sky Sports in December 2019, Benitez clarified his words on Everton. Benitez explained that what he had meant to say was that Everton’s approach was that of a small team, not that he thought Everton is a small club.

Admittedly it wasn’t an apology but he did take back the way he dismissed the Everton name in his 2007 post-match interview. This was in response to being asked if he would consider the Everton job should he be asked, or if his Liverpool connections would get in the way.

Benitez explained that he always received warm welcomes from blue and red football fans in the city of Liverpool thanks to his closeness to the community. The Spanish manager has his own charity, the Montse Benitez Foundation, which focuses on supporting small, local charities in Merseyside and the Wirral.

Benitez said he has a very good connection with the city (of Liverpool) and not just the Liverpool fans.

“I am a professional and in the future, you never know” is what Benitez said about the prospect of ever being Everton’s manager. He explained: “I want to stay in England, I want to stay close to my family”. Here’s hoping Rafa can win over any doubters left amongst the Everton fanbase.