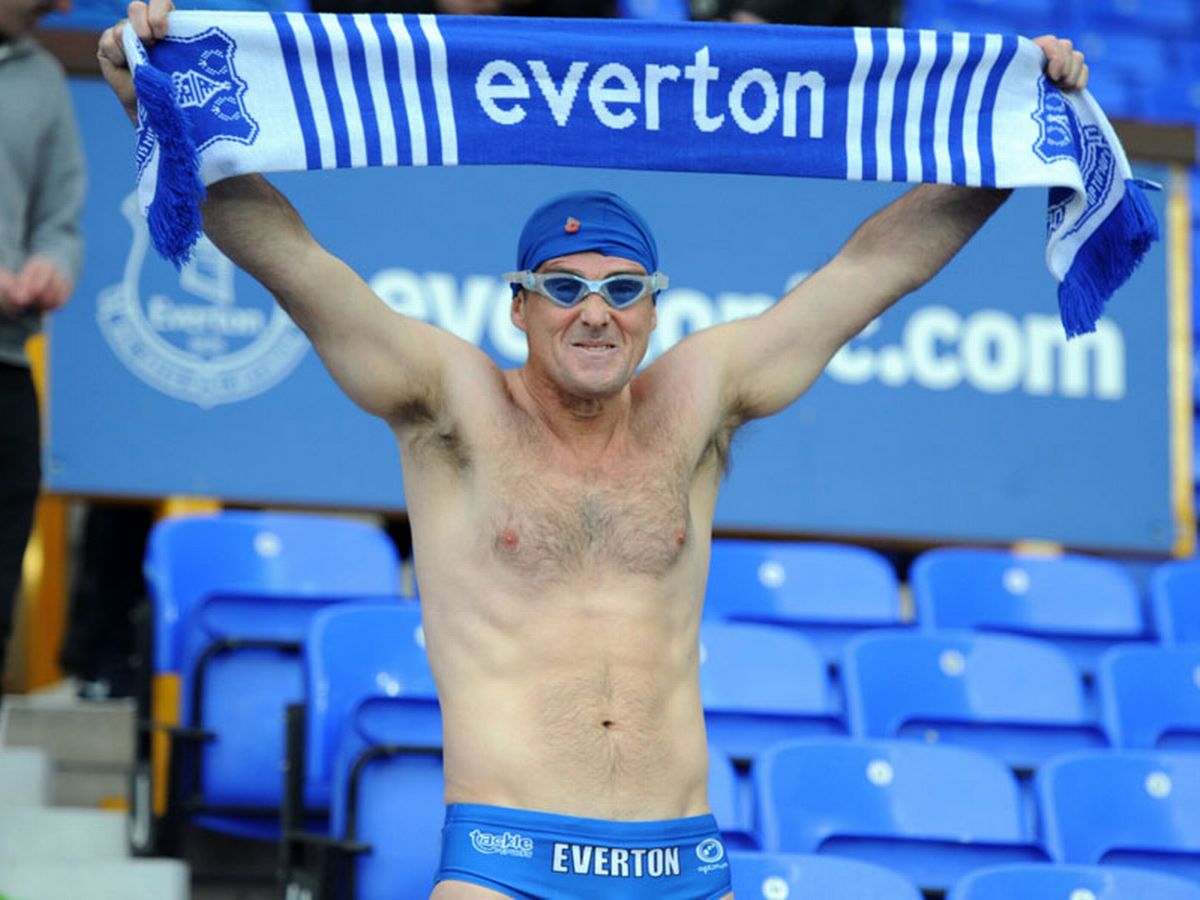 Every club has their crazily committed supporters. The ones who wake up at stupid o’clock to spend more hours on the motorway or the train than they spend asleep, sometimes with little reward at the end of it.

But there are some fans in England who go beyond even that level of commitment. Few people come close to showing the same levels of dedication as these five do, in fact:

To kick off, it’s hard not to look past this scantily clad supporter as one of the most committed.

Michael Cullen – or ‘Speedo Mick’ as he’s become known – has attended Everton games home and away for about the last five years now in nothing but Budgy Smugglers, a swimming cap and goggles whatever the weather, and all in the name of charity.

Collecting money at every game, he has raised more than £100,000 through his tireless efforts, and he also swam the English channel as an fundraising exercise in 2014.

An incredibly popular figure especially among his fellow Evertonians, Mick has also won a number of accolades, too, including the Community Personality award from the Liverpool Echo, and a Pride of Sport award. Well deserved, too.

You would be hard-pressed to find a more dedicated follower of his or her football team than this man.

Tony Fisher has missed a grand total of zero Fulham games in the last five seasons, which included missing his brother’s wedding and following the Whites on pre-season tours.

A Fulham fan for 35 years, Tony was named the club’s official ‘SuperFan’ by the EFL last season in the run-up to their Championship play-off final win over Aston Villa, which saw make a guest appearance on the pitch before kick-off, too.

Going five years without missing a match like Tony is an incredible achievement, but attending all of your team’s home games for 50 years is quite another.

It was 2016 when Bristol Rovers fan Malcolm Norman reached the half-century, having never left his seat, V89 in the Memorial Stadium’s West Stand, empty for a single match since 1966.

The retired postman said in an interview in 2016 how he has also kept the programme for every single one of those home games, admitting “It has rather taken over my house now.”

It takes a special kind of fan to be committed enough to regularly make a 440-mile round trip to home games, but that’s exactly the routine of Hemel Hempstead Town fan Colin Perreira.

Colin, who is partially-sighted so travels with his guide dog Sid, lives in Plymouth, where he goes to university, and has to use the zoom on his phone to see the far end of the pitch.

But none of this has stopped him from paying frequent visits to Vauxhall Road, and his commitment was rewarded in 2018 when club chairman rewarded him with a free season ticket.

Colin, a true fan of the Hertfordshire club, was also invited to give a pre-match team talk at the ground in 2017, too:

young Tudors fan @ColinPerreira has been invited by Dean Brennan to give a pre-match team talk to the @hemelfc squad today pic.twitter.com/MKjIRLYCwZ

With about 60 tattoos devoted to his beloved Pompey, ‘PFC’ engraved on his teeth, and the club crest shaved into his head, it’s hard to look past John Westwood as one of football’s most ardent fans.

At least, he was called John Westwood, anyway, until he changed his name by deed poll in 1989 to honour his team.

A bookseller by trade, John is hard to miss at Fratton Park, where he dons his enormous hat and blue wig, while ringing his bell to represent the ‘Pompey chimes’.

He’s written a book himself, too, all about his football adventures, entitled ‘The True Pompey Fan’s Miscellany’.