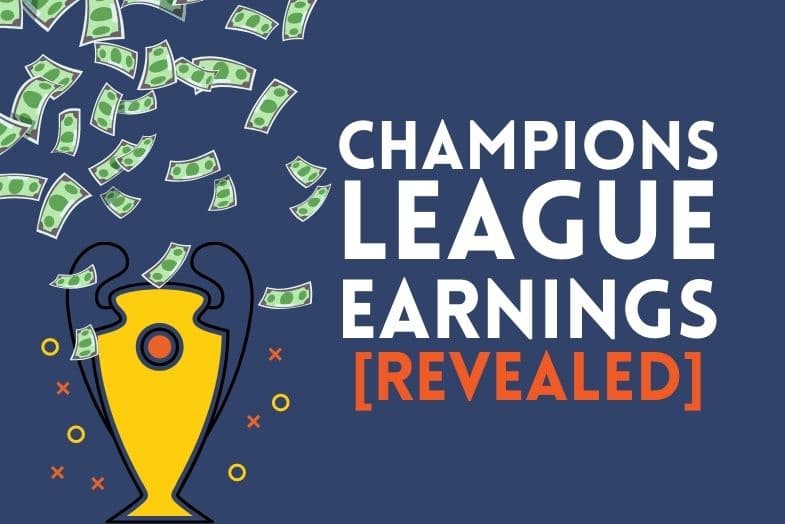 For every top European club, qualifying for the Champions League is the minimal objective. After all, who wouldn’t want to take part in the continent’s elite club competition and listen to its epic anthem before kick-off?

Nonetheless, there’s a far more important reason that prompts clubs to try to secure a spot in the tournament at all costs. Of course, we’re talking about the cash.

The big European clubs all run on particularly high budgets. Therefore, earning large incomes is a must in order to balance the books.

That is why qualifying for the Champions League could make all the difference between attracting new star players and having to sell some of the squad’s most important members.

So how much is qualifying for the Champions League worth? How are the earnings divided between the participants? And how does it compare to the Europa League’s earnings?

How Much is Qualifying for the Champions League Worth?

In the 2021/22 campaign, each club that reached the Champions League group stage received 15.64 million euros.

Of course this figure is far from being the finished article but a mere entry prize. As we shall see below, several other sources of income will be added. Some of it is based on the results and how far each club progresses in the competition, while others are determined by other factors, including TV money which varies in every nation.

In this section, we’ll learn more about the club’s sources of incomes from the Champions League.

Champions League Earnings by Round

As we mentioned above, the club’s earnings augment with each round. So let’s check out how much a participant earns from reaching every stage of the competition, according to AS.com.

In the Champions League group stage, every win earns the club a bonus worth 2.8 million euros. Moreover, a draw sees each side gaining an extra 930 thousand euros.

Thus, we can now understand why every match matters in the competition. More often than not, some European giants manage to seal a comfortable qualification to the knockout stages after just four matchdays. And yet, they remain adamant on winning their remaining fixtures, because as we can see, each victory is worth almost 3 million, even if it wouldn’t change much in the final standings.

Besides the incomes related to qualifications and bonus money, Champions League participants have access to other income streams, including TV money, coefficient-based amounts and gate receipts.

Firstly, we begin with TV money. According to UEFA, a total of 300.3 million euros will be distributed amongst the participants of the 2021/22 edition.

This figure is divided based on several aspects, the most important is how much TV rights is worth in each country based on the size of the market and the investment made by the local broadcasters.

The money allocated to each local federation is then split between the country’s representatives based on how many matches each side played in the competition. Moreover, where each team finished in the league table in the previous season also plays a part.

Secondly, a total of 600.6 million euros is distributed between the 32 group stage participants as coefficient-based amounts. In the UEFA rankings, the standings are determined based on the teams’ European results in the last ten years.

Therefore, the club with the lowest coefficient receives a figure of 1.137 million euro. The same figure (1.137 million) is added with each additional spot, meaning that the team ranked 31st receives 2.264 million, the 30th ranked gets 3.3 million and so on…

Finally, gate receipts offer an important income for participants, as the tickets for the Champions League are always in high demand. However, the ticket prices vary based on the country, club, the stage of the competition and of course the seat itself.

According to Ticketsmarter.com, CL tickets usually start at a range between 80 and $100, while the average ticket is worth around $350.

How Much Do Teams Earn in the Champions League

According to AS.com, the club that lifts the Champions League trophy could earn up to 85 million euros in prize money (if it wins every group stage fixture). That is without adding other source of incomes, like coefficient-based amounts, TV money and others.

So let’s try to calculate the estimated figures that each participant would receive based on his results. Again, we’re only mentioning the sources of income related to prize money, because other streams (like coefficient-based amounts and TV money) vary depending on factors that are either unrelated or non-directly related to the club’s results in the competition.

As we mentioned above, winning a group stage match earns the club an extra 2.8 million euros in bonuses while a draw is worth 930,000 euros.

While UEFA tries its best to make the viewers interested in its second and third club competitions, the Europa League and Conference League remain on an another planet when compared to the Champions League’s significance, prestige and especially prize money.

In this day and age, the Europa League remains a mere consolation prize for those who fail to book their spot in Europe’s premier competition.

In fact, the English Premier League is perhaps that only other competition that rivals the Champions League in terms of pouring cash into the coffers of its participants.

So let’s check out the stunning gap in terms of prize money between the Old Continent’s two main club competitions based on the 2021/22 season.