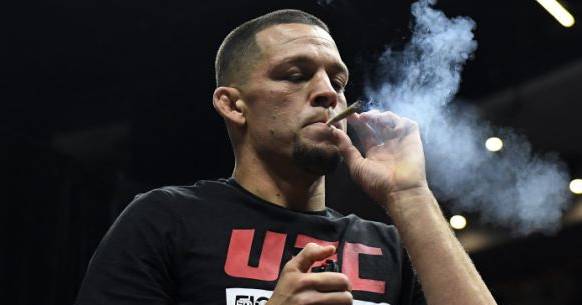 If you’re a UFC fan who’s ever looked at the likes of Nate and Nick Diaz or Sean O’Malley and wondered, ‘Are you actually allowed to smoke weed as a professional mixed martial arts fighter?’

Perhaps you’ve thought similar things about UFC fighters and alcohol, cigarettes or even some forms of medicinal drugs. Can UFC fighters take ibuprofen or creatine, for instance? Or what the rules and boundaries are with regards to betting?

Below, we’ll answer all of these questions and more, as we run through a definitive list of what UFC fighters can and cannot do:

In short, virtually none.

One of the biggest misconceptions is that UFC fighters are allowed to smoke weed. They are allowed to consume the substance during when they are out of camp, but not in the lead up to a fight. Indeed, a survey published in June 2020 by The Athletic even concluded that nearly half of all MMA fighters use marijuana.

Cannabinoids like CBD are permitted, but if a fighter’s THC level is found to be over 150 Ng/Ml during active competition (i.e. in the build-up to a fight), they may be issued a ban.

Can UFC fighters take coke? Of course not, because stimulants like cocaine and MDMA, or narcotics such as methadone and morphine, are also on what is a pretty extensive Prohibited List.

That said, in November 2019, changes to the World Anti-Doping Agency (WADA) Code relaxed these rules rather significantly.

They stated that, in situations where a fighter can demonstrate that the use of such recreational drugs was ‘out of competition’ and not for performance enhancement, any suspension received by upon completion of drug awareness courses could be greatly reduced, or even waived altogether.

The only cannabinoid not to be included on the UFC’s Prohibited List is cannabidiol (CBD) – thanks in part to the aforementioned Nate Diaz.

According to UFC Vice President of Athlete and Health Performance Jeff Novitzky, this whole drama began after Diaz was using a CBD vape pen at the UFC 202 post-fight press conference in August 2016, following his defeat to Conor McGregor on a majority decision.

“At the time, the rule was the in-competition period where CBD was prohibited lasted until four hours after the conclusion of the fight. He [Diaz] was clearly within that time period,” Novitzky said on an episode of the Joe Rogan Experience podcast.

“So, USADA contacted me and said ‘Hey, technically, Nate was in violation of this.’ And I said, ‘Look, this was not the intent of the rule.’”

“The WADA prohibited list, which we follow, took it [CBD] completely off starting 2018. And it was the case before. They could do it in training; it was only prohibited during competition, so weigh-in day, and fight day. Now, it’s been completely taken off the list, and it’s OK to use it anytime.”

As a result of CBD becoming an allowed substance, Novitzky jumped to Diaz’s defence in this particular instance, saying that it was only clear he used it after his fight with McGregor.

Now, the rule has changed so that the in-competition periods with a collection immediately after the fight, rather than until four hours after the fight ends.

Per the United States Anti-Doping Agency, ibuprofen (either Advil or Motrin) is considered a pain medication which UFC fighters are permitted to take, as well as the likes of naproxen and vicodin. So, yes, ibuprofen is legal within the rules of UFC.

Likewise, creatine is not on the Prohibited List and as such is also permissible for UFC fighters to take. It is a natural compound that your body produces from amino acids, rather than a synthetic, non-organic substance like cocaine.

It is believed to have a positive effect on the strength of your muscles and your brain, but has caused controversy previously due to the debilitating impact it can have on your kidneys and/or stomach – many have said that ‘bloating’ is a side-effect of creatine.

Yes, because the ASADA removed it from their Prohibited List from 2018. Not during a fight, though, of course – in fact, by and large, only water is permitted while a match is in progress.

Not all of them do, but it would be naive to suggest every UFC fighter is teetotal, or has been throughout their entire career.

Conor McGregor, notoriously notorious, was, by his own admission, “drinking and bleeding all fight week the last week [before UFC 229 in October 2018].” And every UFC fan has probably seen the footage of former heavyweight champion Bas Rutten looking worse for wear on his birthday, or Michael Bisping in a similar state at several press conferences:

Again, nicotine is exempt from the ASADA’s Prohibited List, so while smoking cigarettes is not advisable for any UFC fighter, it is not illegal.

Along with six other substances including caffeine, nicotine is included in the WADA’s 2020 Monitoring Program, and thus not considered a prohibited substance. For the time being, anyway.

As with alcohol, it would be fanciful to assume that not a single UFC fighter is partial at least the odd cigarette; current featherweight Sage Northcutt perhaps being the most prominent example of smokers in the UFC.

Can UFC Fighters Bet on Themselves?

Yes and no. A UFC fighter, or members of their camp, can bet on them to win a particular clash, but that’s it. It can’t be more specific than that.

Even betting on yourself to win, while permissible, is still frowned upon and seen by some as unprofessional.

Can UFC Fighters Bet on MMA Fights At All, or Other Sports?

Yes; as alluded to in the previous section, the rules on UFC fighters betting on matches are not overly stringent as it is.

In the case of fights not involving themselves, they are allowed to place bets, providing there is no way it could be seen of fixing the fight or bringing it into disrepute.

Can UFC fighters bet on other sports besides MMA/UFC fights? Indeed they can. Just gamble responsibly if you do.