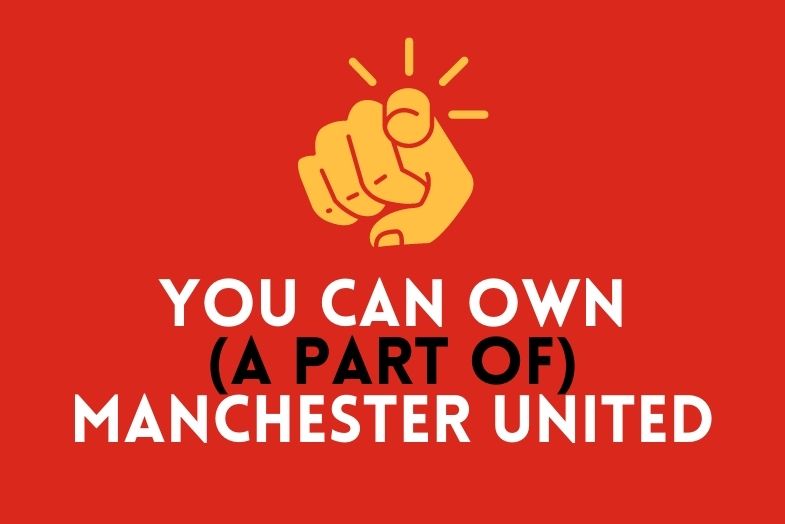 Thanks to its dominance during the ‘Fergie Years,’ Manchester United became the biggest club in England and one of Europe’s footballing superpowers. That dominance would see Manchester United floated on the stock exchange where shares in the football club could be bought by anybody.

This means, in theory, that fans of the Red Devils could have their own little slice of the club that runs deep in their veins. However, does this still remain the case? Let’s explore how to buy shares in Manchester United and whether anyone can invest in their favourite football club.

Manchester United is a club that anyone can buy shares in, as it a publicly-traded organisation. While the Glazer family is recognised as the owners of Manchester United, this is only because they own the largest portion of its shares. With greater ownership level comes greater voting power.

As a publicly-traded company, shares are available to anyone, however the price of the shares changes with the value of the club. The greater the club’s value, the higher the share price.

Equally, the lower the club is valued, the lower the value of the shares. Buying low and selling high is the general plan for stocks and shares, with low stock value generally being looked at unfavourably by those on the board.

Why is Manchester United Publicly Owned?

Manchester United is owned by Manchester United PLC and was floated on the New York Stock Exchange in 2012. The club’s owners, the Glazers, sought to raise funds at this time so shares were made available for investors to flood money into the club.

Can I Buy Shares in Manchester United FC?

Anyone, including fans of Manchester United, can buy shares in the football club. As long as you have a share trading account (e.g. eToro) you can invest in any company selling its shares on the stock exchange. This could be Manchester United or Apple, depending on how much you are willing to invest.

Whether you can afford to invest in the club is a different matter and is wholly dependent on the share price. Not all shares are available to buy, either. For instance, if you bought shares in the club and were intending on holding onto them for a year, how would someone else buy them from you?

This also works the other way and if no one is willing to buy your shares then it’s not going to be possible to move them on. So, while Manchester United shares are available to buyers, there is only a limited amount in the public domain. This prevents the club from being bought from underneath the majority shareholders’ feet without them knowing.

As a publicly-traded business, Manchester United’s stock is wholly dependent on general performance. At the time of writing (January 2022), stock price had fallen to $14.76 from $16.6 in October. This could be seen as buyers losing confidence in Man Utd stock as on-field performances dropped.

Prices can fluctuate but in general, prices remain pretty steady for Manchester United. That makes it a decent purchasing option as it isn’t going to be subjected to major peaks and troughs on the regular. The club regularly pulls in some of the most commercial income in the football world, making it one of the richest clubs in the world.

What is the Price to Buy Manchester United?

To gain control of Manchester United, an investor would have to buy out the Glazer family, which means initially gaining over 10% of the shares. With a single stock price of $14.76 in January 2022, and total shares at 43 million, someone is going to have to shell out $63.4 million for 10%.

However, that is assuming the Glazers sell their shares at that price. That is the same principle for anyone looking to own 100% of Manchester United’s shares.

It’s one thing to have the money for each share but it’s another to be able to buy them all up as not everyone wants to sell. There is also the asking price the Glazer family has placed on the club, which is an astonishing $4 billion thanks to its assets and commercial revenues.

Could Anyone Buy Manchester United?

Realistically speaking, only a handful of people can buy Manchester United outright. The club is reportedly valued at $4 billion by the Glazers, so that’s the asking price. No matter how many shares a person could buy on the stock market they would still have to topple the Glazer family and the asking price.

Where to Buy Shares in Man Utd

Here are some examples of trading platforms where Manchester United shares are available to buy: