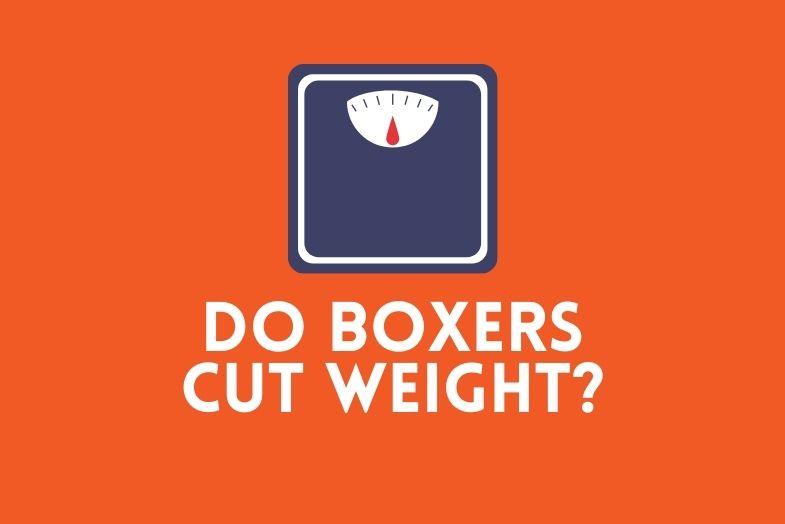 Whilst dividing opinions and causing extreme health concerns for many fighters, weight cutting has become one of the most debated areas of the combat sports world.

Simply put, weight-cutting is a process that consists of dehydrating the body as much as possible in preparation for an upcoming fight with the sole aim to allow boxers to weigh in at the lowest weight class physically possible.

Although the arguments about extreme weight cutting differ between fighters, the media, and coaches, many fans are still unsure as to what ‘weight cutting’ actually is and how it is carried out.

So is weight cutting allowed in modern boxing? And how much weight do professional boxers manage to cut?

Join us as we go through the extreme nature of weight cutting and the drastic measures some athletes take to meet certain weight classes.

Is Weight Cutting Allowed in Boxing?

Considered as a method for giving fighters an instant advantage in a fight, weight cutting is allowed in boxing throughout all weight divisions.

Promotions will usually schedule weigh-ins between the fighters roughly 36, 48, or 72 hours before the fight, leaving boxers a specific time window to put the lost weight back on.

This means that the further away the weigh-in is from the fight, the greater the chance that fighters will have of putting most of the cut weight back on without being too ill.

Within the timeframe between the weigh-in and the fight, boxers who use weight cutting will need to completely rehydrate themselves to a weight that can give them a size and weight advantage over their opponent.

A longer timeframe between weigh-in and the first bell of the fight also gives fighters a better chance of recovering from the severe re-hydration that is risked through weight cutting. The advantage weight cutting gives fighters encourages boxers to cut weight extremely hard, with boxing authorities often criticised and held responsible for putting the weigh-ins a long way out.

Do All Boxers Cut Weight?

Although cutting weight is a legal method in boxing, not all fighters use weight cutting when preparing for a fight.

The International Boxing Federation (IBF) heavyweight division has the fewest weight-cutting fighters, as they require less reliance on speed and agility compared to the lower-weight categories.

Weight cutting is also disregarded in catchweight fights; a fight in a combat sport where a weight limit is not kept to the traditional limits for weight classes. Often between two standard weight classes, hence ‘catch’.

A catchweight is negotiated before the weigh-ins conducted one day before the fight. This can often lead to different weight class opponents fighting each other despite the obvious advantages.

Catchweight fights are considered to be more dangerous than regular bouts, with some fighters often not re-gaining the needed weight and therefore fighting an opponent with greater size and advantage.

How Much Weight Do Boxers Cut?

The average boxer cuts up to 15lbs for the weigh-ins, with some fighters reaching weight-cutting heights of 20lbs for their fights.

Safety limits set by boxing officials deem two percent dehydration body weight loss as a safe amount, boxing and mixed martial arts doctors recommend fighters dry out two percent of their body weight and then put that back on again once they have made weight.

Weight cutting can vary in severity with some boxers opting to drop only a few pounds whilst fighting in a division close to their natural weight. On some occasions, boxers can partake in brutal weight cuts in an attempt to have a size advantage over their opponents.

The widely regarded ‘best way’ for fighters to make weight is to cut down fat whilst maintaining lean mass and muscle. This method of starving yourself can make you just lose muscle and only maintain fat, which is no good for a top-level fight.

Starving themselves of water and food is achieved through a combination of sweatsuits, towels, and saunas to dehydrate the body and shed as much water weight as safely possible.

A different method of weight cutting is losing weight through fluid. Known as a rapid weight loss system, losing weight through a fluid can help fighters lose a lot in the last few days before their weigh-in, through dehydrating themselves, which is not recommended by the boxing official doctors.

The safest goal from a long weight drop is to maintain lean body mass and the minimal amount of fat that a fighter can comfortably live with and not carry any extra weight.

Why Do Boxers Cut Weight?

Boxers cut weight to gain a considerable advantage over their opponents. Weight cutting allows fighters to be larger and stronger if done correctly, as they can cut down to a weight class where they will be as big as physically possible.

Through correctly weight cutting, a fighter who has managed to gain a 20-25lb weight advantage on their opponent will likely be more powerful, therefore giving them a greater chance of hitting a knock-out blow.

A similar strike against someone with the same weight may have less of an impact, consequently making the concept of weight cutting all the more appealing.

Although it can be seen as an attractive method for many boxers, weight cutting can have its downsides.

When a fighter rehydrates the fluid after the weigh-in, the fluid doesn’t always distribute itself normally within the body, often going in the wrong places.

When the human body dehydrates, it naturally retains fluids through the secretion of an anti-diuretic hormone, further causing the body to gain fluids rather than lose them.

This can cause a rebound for many boxers where they gain more fluid weight than they previously had, with the additional weight being fluid and not muscle. Furthermore, the fighter will feel over-hydrated and often ill before the bout.

Although it is a common method in combat sports, most heavyweight boxers do not take up weight cutting as they will fight close to their natural weight.

Weight management is often not a considerable priority for the heavyweight division, with excessive cardio, dehydration, and dieting not vital to the boxing heavyweight’s training.

As fighters move into the heavyweight category, speed and agility are a lower concern than strength. Strength becomes more vital to their skill set compared to the lower weights, whose skills tend to last longer as they age.

This aim for a higher weight can also have negative side effects, with the knockout rate averaging at the highest for the heavyweight class due to the increased weight and power behind the punches of the fighters.

Although boxers use weight cutting to gain an advantage in their weight class, MMA fighters cut considerably more as they aim to move between weight classes for certain bouts or championships.

Muay Thai and MMA fighters are widely known for losing up to 15 percent of their body weight through weight cutting for fights. Although extreme, these measures of cuts can allow fighters to move between weight classes and compete for different championships on the highest levels of the sport.

Similar to boxing, UFC fighters can often lose weight up to 30lbs before a fight before attempting to rehydrate after a weigh-in for a professional fight. The fighters will attempt to lose extreme amounts of weight 48 hours before a fight if they want to fit into a certain weight class before their next bout.

They are often given 24 hours to rehydrate after the weigh-in so that they can regain as much weight and muscle as possible for the biggest advantage.

While measures can be extreme in MMA, the rules for weight classes are very strict in the sport compared to boxing. Fighters cannot weigh one pound over the agreed limit for non-title fights, they also cannot be more than half a pound above the maximum weight for a title fight.

Weight cutting has been dragged into the UFC headlines over the past decade with many of the promotion’s top fighters cutting considerable amounts of weight in preparation for big fights.

Current UFC Lightweight Champion, Khabib Nurmagomedov, is well known for his extreme weight cuts, often losing 15-20lbs for fights whilst weighing an average of 185lbs when not fighting.

Khabib is also known to regain as much weight back as possible after weigh-ins, giving him a physical edge over his opponents, as seen through his UFC record of 29 wins and 0 losses.