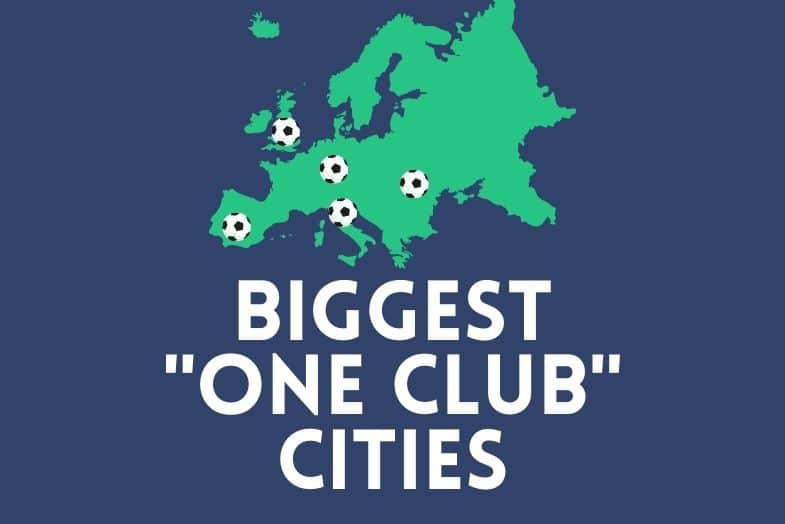 Football is a game of passion and rivalry. Some of the best games in professional football are those between two teams from the same city, otherwise known as a derby. These games can ignite into chaos with just the smallest of incidents on the pitch, causing emotions in the stands to swell and overcome those in attendance.

But not all large teams have local or historic rivals to enjoy bragging rights over. Some clubs are the only big or professional team in their city, meaning they have to find rivalries with other clubs in a different way. However, despite the lack of local rivals, one-club cities have some of the most passionate supporters in the world.

With no other team to divide a city’s support, its citizens are fully focused on cheering on their team with their brothers and sisters. So, let’s discover which are the biggest ‘one club’ cities in Europe.

A one club city is as simple as it sounds, it’s a city with just one professional football club. While there may be other teams in these cities, we are only concerned with those that enjoy professional status to form a rivalry with another club.

Biggest “One Club” Cities in Europe

These are the European cities that enjoy just one large football team. Amsterdam is a notable omission, however. In the original research, Amsterdam was overlooked because it had another team, other than Ajax, associated with it, AFC DWS.

However, although AFC DWS used to be large enough to play not only in the Netherlands but also European competition, it is now amateur. As such, Amsterdam can be classed as a one-club city, with a population of 848,000 it would enter this list in third.

Biggest City with One Football Team

Naples, or Napoli if you prefer, has the largest population for just one professional football team. Its population of almost one million dedicates their energy into just one football team, making them one of the most passionate fan bases in the world.

With so much dedication, it’s perhaps easier to see why Napoli fans take it to heart when a beloved player leaves them. As such, the likes of Gonzalo Higuain feel the full force of the city’s wrath when leaving for a rival.

What’s the Biggest British City with Only One Football Team?

Leeds enjoys the honour of being the largest city in the UK with just one professional football team. There are quite a few clubs dotted around the country that don’t have a direct derby rival, but despite this they still manage to form fierce rivalries with other teams in the football pyramid.

Wait… What About Newcastle United?

You may be wondering why Newcastle hasn’t made it onto either the European or UK top lists. The reason is mostly a technicality but the city of Newcastle’s population is just 300,000, while the Newcastle upon Tyne region’s population is over 800,000.

Just like in Naples, United fans are a passionate bunch and the entire city gets behind their team. With the football team on the up thanks to recent investment, now is a great time to be a football-loving Geordie.