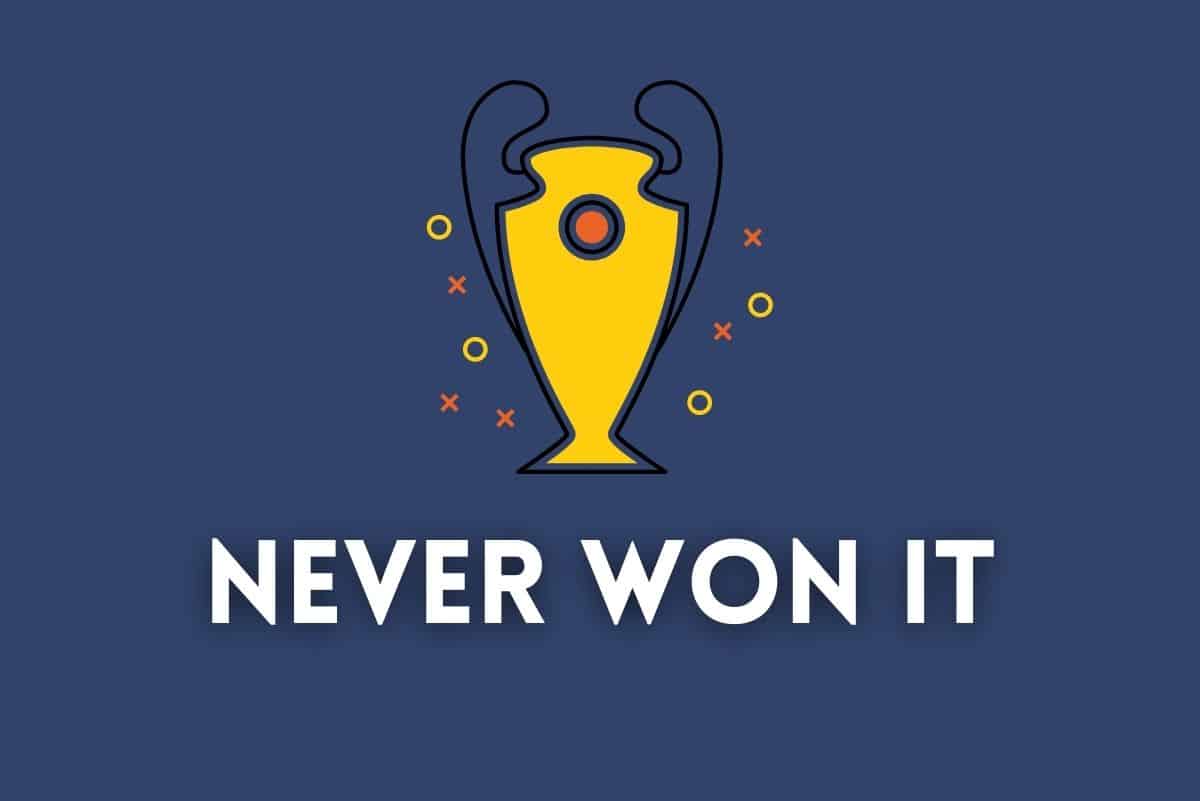 Today it seems the priority for most supporters of big clubs is to win league titles and capture a Champions League trophy. Oftentimes, ownership may disagree with fans on priorities.

We’ve already gone over who has won the most Champions League titles. However, who are the biggest clubs to have won the fewest, e.g. nil?

Commonly known as City or “Citeh”, MCFC hasn’t always been the powerhouse that it has become in modern times. However, that hasn’t prevented them from topping our list of biggest clubs to have never won the big one.

Under Pep’s reign, City has managed to win four Premier League titles, four League Cups, and one FA Cup. So it’s more than disappointing that English world-beaters have yet to lift the UEFA Champions League trophy.

Manchester City came close in the 2020/21 Champions League falling to Chelsea 1-0 in a cagey final in Porto. It seems for now that Pep and the lads will have to console themselves with the title of ‘runner-up’.

It may surprise some that despite amassing 13 league titles and 14 FA Cups, The Gunners have never won a European Cup. For a large chunk of the Premier League’s existence, Arsenal has been a team that dazzles on the pitch and ‘plays the right way.’

The bulk of that reputation is mostly due to Arsene ‘sending Walcott on too early’ Wenger. During Frenchman’s tenure, the club won several trophies, During the 2003/04 season, Thierry Henry, Patrick Viera, Ashley Cole, and Jens Lehman led ‘The Invincibles’ to the first unbeaten season in English top-flight league history since 1899.

But it wasn’t until the 2005/06 Champions League season before Arsenal overcame their quarterfinal hex. They would make it all the way to the final against Barcelona. A Sol Campbell header gave them the lead in the first half, but it would be two late goals from Eto’o and Belletti that would pry the trophy from Arsenal’s cold dead fingers.

Going all the way back to 1955, Spanish clubs have won more European Cups than any other nation with 23 in total. Of course, that is largely due to Real Madrid (14) and Barcelona (9). As the third-most successful Spanish club, Atletico has had more than a modicum of success.

The Colchoneros have managed to win La Liga 11 times and the Copa del Rey on 10 occasions. Despite not having won a European Cup it’s not for the lack of trying. Atletico has been runners-up three times.

In 2016 they lost to cross-town rival Real Madrid 5-3 on penalties after extra time; however, they were never closer than in 2014. A Diego Godin header in the 36th minute put Atletico in control of the game. They would give up a goal in the 93rd minute and go on to lose 4-1 in extra time.

Similar to Manchester City, PSG has swiftly risen to power due to a large cash injection from a wealthy ownership group. The club are a relative newcomer in world football having been founded in 1970. Since winning its first Ligue 1 title in 1986, the club have managed to win a total of 10 league titles.

While not quite a Champion’s League, PSG did manage to win a ‘UEFA Cup Winners Cup’ (now discontinued) in the 1995-96 season. Making big splashes on acquisitions like Neymar, Messi, and home-grown phenom Mbappe, the club seems destined to hoist the CL trophy.

PSG has come close, once. During a global pandemic, Paris managed to get to the 2020 Final but lost 1-0 to Bayern Munich in Lisbon. Ironically, the match winner was scored by PSG academy-trained Kingsley Coman.

Since 1955, Italian clubs have lifted the European Cup 12 times. AC Milan leads the way with 7 trophies, while Inter Milan (3) and Juventus (2) bring up the rear. Perhaps the most glaring omission from this list is AS Roma.

I Giallorossi were founded in 1927 and has won Serie A 3 times. The club’s most recent league title came in 2000/01, a team which featured none other than the mercurial Francesco Totti.

Roma would come oh so close in the 1983/84 European Cup. They battled Liverpool at the Stadio Olimpico in Rome to a 1-1 draw but would go on to lose on penalties.