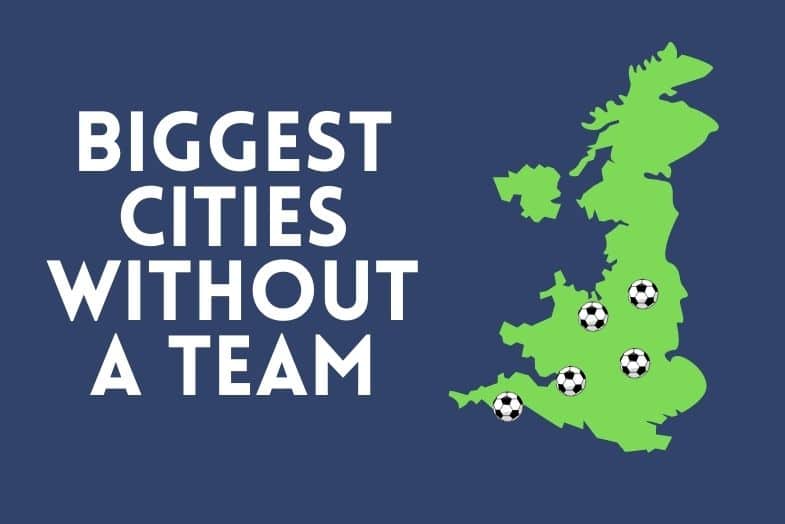 Football is the most-loved sport in the world and perhaps the country with the best footballing infrastructure and most-supported pyramid is the United Kingdom. Fans of football in the UK make the pilgrimage to follow their team through rain or shine, which is typically rain. From Wanderers to Lions, Reds and Blues, football fans are desperate for local glory.

Even in the smallest towns across the UK you will find loyal football fans supporting their local team, while many even follow their team when its not based in the same town. But while there are football teams and fans dotted across the country, there are a limited number of top flight places up for grabs. We’re taking a look at the UK’s biggest cities that leave their supporters wanting more as they miss out on top flight football action.

Football fans are often used to disappointment but it’s worth it for the sense of achievement when things do go their way. Being based in a densely populated city isn’t a guarantee of top flight football however.

You might think, given its financial power, that the Premier League is only made up of teams from large, successful cities but for the 2022/23 season, Bournemouth will enjoy top-flight status despite being a town.

Sheffield has the current unwanted status of being the biggest city without a top level football team. Historically, United and Wednesday have had success in the top flight but in recent years those good times have been scarce.

Bradford is a city that is arguably more into rugby than it is football but Bradford City AFC have enjoyed some moderate success in the past. The team has played top flight football, even winning an FA Cup in 1911 and its most recent appearance in the top flight was the 2000-01 season.

Although Bristol is a big city in the UK, its football teams haven’t had much top flight success in recent memory. It’s biggest club is Bristol City but the last time The Robins were in the top flight was the 1979-80 season.

As a city, Cardiff enjoys both football and rugby but as things stand it doesn’t have a top flight football team. Cardiff City is the biggest team in the Welsh capital and it currently sits in the Championship but has enjoyed Premier League football as recently as the 2018-19 season.

Unlike the other cities that could be considered sleeping giants, Wakefield doesn’t have a footballing pedigree. The city is very much a rugby league place with Wakefield Trinity playing in the Super League.

Any football fans that are in Wakefield can follow the ventures of Wakefield A.F.C. which was formed in 2019 and plays in the Northern Counties East League Division One. Geographically, they may also choose to support either Leeds or Huddersfield as neighbouring cities.