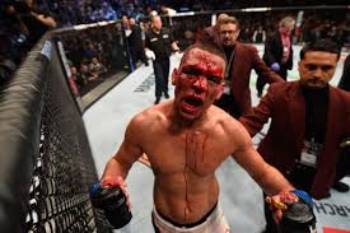 For years, mixed martial arts has been a goldmine for soundbites and trash-talking, from the unmatched self-confidence of McGregor and Sonnen to the straight-up comedy of St-Pierre and Masvidal and everything in-between. When it comes to fighting quotes, MMA is pretty much incomparable to any other sport.

Here, we look back at 50 of the best UFC quotes in history; a mixture of the best fighting quotes, the funniest Conor McGregor quotes, the most bizarre post-fight interviews and much more.

“A boxer is like a lion, the greatest predator on land. But you throw him in the shark tank and he’s just another meal.”

“There is a difference between a fighter and a martial artist. A fighter is training for a purpose: He has a fight.

“I’m a martial artist. I don’t train for a fight. I train for myself. I’m training all the time. My goal is perfection. But I will never reach perfection.”

“People say to me all the time, ‘You have no fear.’ I tell them, ‘No, that’s not true. I’m scared all the time. You have to have fear in order to have courage. I’m a courageous person because I’m a scared person.”

“Actually on the contrary my MMA career has gotten in the way of my weed-smoking.”

Nick Diaz, when asked if his weed-smoking has got in the way of his MMA career

“There’s three things in life that excite me: a woman, dinosaurs, and the violence of the Octagon.”

“When I started I used to go off just instincts. Then they took headbutts away so I had to learn some skills.”

“I want to outlive my children.”

“These custom-made suits aren’t cheap. This solid gold pocket watch, three people died making this watch. I need to put people away. I need those big fights. I’m going to end up in debt pretty fast.”One of Conor McGregor’s many funny fight quotes – on his expensive taste during a post-fight press conference at UFC Fight Night 26 in Boston, August 2013

“Wanderlei Silva: six feet tall and 205 pounds. Boy, until I met you I didn’t know they could stack crap that high. Three months, you and the bad guy.”

“If people can walk around – and I don’t mean this in a disrespectful way to religious people – and you believe the son of God came down to earth 2,000 years ago, and he killed himself for our sins, and he can walk on water, and there’s a God up there looking after ourselves, and if you get on your knees and pray to him that things will change; if you can believe that, then you can believe that I can knock the f**k out of Luke Rockhold two weeks from Saturday.”

Michael Bisping, prior to his title shot against Luke Rockhold, May 2016

“When Anderson [Silva] walks into a room, you can hear a rat pissing on cotton.”

“If he plans on getting knocked out in the first round, that’s his business.”

Quinton ‘Rampage’ Jackson, prior to his rematch against Chuck Liddell, who had predicted a first-round knockout in his pre-fight interview

Ken Shamrock to Tito Ortiz, prior to the first of their three career fights with each other

“The only weight I give a f**k about is the weight of the cheques and my cheques are super-heavyweight.”

On his jump from featherweight to welterweight ahead of his first fight with Nate Diaz, January 2016

“Me and Jesus are cool. I’m cool with all the gods. Gods recognise gods.”

After he made a comment some deemed disrespectful to Christianity, January 2016

“I’ve spent a lot of time slaying everyone in the company. Backstage I’m starting fights with everybody. I’ve ridiculed everyone on the roster.

“And I’d just like to say, from the bottom of my heart, I’d like to take this chance to apologise… to absolutely nobody. The double champ does what the f**k he wants.”

After beating Eddie Alvarez in the second round to claim the lightweight title, November 2016

“Surprise, surprise, motherf**kers! The king is back!”

After being Nate Diaz in a rematch having lost to him in their first fight, August 2016

“And he tap I was like, okay, it’s not enough [after beating Conor McGregor]. I need something. Then I see some of the guys in his corner talking with me and I was like: now I have to bite his heart.“

After attacking Dillon Danis following his victory over Conor McGregor.

“I’m not going to please everyone, not everyone’s going to like me. I accepted that a long time ago, and if I had to shed a tear every time I got a hate email, believe me, I’d be severely dehydrated.”

Interview with the Daily Mirror, 2009

After an emotional weigh-in after beating Jason Miller, December 2011

“No, it’s not possible because you see, the thing is, I hit puberty and then once you hit puberty, you pack on a bit of muscle. Benavidez might encounter that problem one day when he grows up and his balls drop.”

On the possibility of fighting Joseph Benavidez

“Listen, I’ll fight Alan Belcher on the way to the car right now, it’s no problem. He needs to focus on having a fight with his tattoo artist for that abomination on his arm and leave me alone.”

On Alan Belcher at the UFC 152 pre-fight press conference

“I had never been happy in anything I did. So when I started training full-time for mixed martial arts in the summer of 2003, it was the best thing I’ve ever done in my life.”

Before fighting Michael Bisping, a fight he eventually won in controversial circumstances, which saw Sonnen even admit that Bisping won the fight.

“I was in Las Vegas when the Nogueira brothers first touched down in America. There was a bus, this is a true story. There was a bus that pulled up to a red light, and Little Nog tried to feed it a carrot, while Big Nog was petting it. He thought it was a horse. This really happened.

“He tried to feed a bus a carrot, and now you’re telling me this country has computers?! I didn’t know that.”

“Nike has a long history of signing dorks and it looks to me like they just got one more.”

“I actually held public office and I left the only way a person should, in handcuffs.”

When asked by a fan if he would become a politician

“I’m the most dangerous unarmed woman in the world. I’ve prepared my entire life to be that way. Whichever girl I’m going to fight, I’m sure that I’m going to find a way to win.”

“When I was in school, martial arts made you a dork, and I became self-conscious that I was too masculine. I was a 16-year-old girl with ringworm and cauliflower ears. People made fun of my arms and called me ‘Miss Man.’

“It wasn’t until I got older that I realized: These people are idiots. I’m fabulous.”

On self-esteem issues she faced as a child

“When people say, ‘Oh, you’re so cocky. You’re so arrogant,’ I feel like they’re telling me that I think too highly of myself. My question for them is: ‘Who are you to tell me that I need to think less of myself?'”

“If you can’t dream big, ridiculous dreams, what’s the point in dreaming at all?”After winning a bronze medal in judo at the 2008 Beijing Olympics

“People have been fighting each other for millennia. It’s part of human nature. The confusing thing is we now live in a society where it’s not illegal to be an asshole, but it’s illegal to slap one.”

“The only time you will see me content is when everyone is calling me the greatest fighter of all time.”

“I can’t wait to showcase all my years of hard work to the Americans and have all my fans with me, my family and people who’ve just been there for no other reason than to support Darren Till.”

“I’m destined to become the greatest fighter the world has known. If I didn’t truly believe that I would go and teach or do something else.”

“The advantage I have over every other fighter is my mentality.”

“I’m in this for people to say at the end of it, ‘You were the greatest.’ That’s my only mentality. F**k money, f**k everything else.”

I’m not really calling anyone out. The only thing I want to call out is a company… Instagram, give me my account back – ya lizards.”

“We’re scousers. We don’t get knocked out.”

“I’ve had to prove myself beyond that street-fighter image with some people in the UFC. It has a stigma to it.”

“They [punches] were super necessary.

“The referee hadn’t pulled me off, and my job is to hit somebody until the referee pulls me off. So to those people, I would say maybe don’t watch MMA. Go back to soccer.”

About the punches he landed on Ben Askren before an official stoppage, July 2019

“His face is a magnet to crotches. There’s a heavy price to pay for that. This crotch ain’t for dudes.”

On Ben Askren prior to their fight, July 2019

“It’s amazing to silence people. It’s a drug that most people haven’t ever tasted. Man’s tried to duplicate it but they can’t find the recipe for it. I’m glad I’ve got the recipe.”

After a one-shot KO of Darren Till in London, March 2019

“I had to give him the three-piece with the soda, and then just glide out of there, you know? And then some of his friends tried to sucker punch me, those guys did a big mistake.”

On his backstage brawl with Leon Edwards after the Till fight

“The one who doesn’t fall doesn’t stand up.”

Fedor Emelianenko after losing to Fabricio Werdum, his first loss in a decade, June 2010

“I think that last one was just to shut him up a little bit.”

“I am very glad you won that fight, Matt, but I was not impressed by your performance and I look forward to fighting you in the near future.”

“Not bad for an old man.”Randy Couture after beating Tim Sylvia in their UFC heavyweight title fight, March 2007

Conor McGregor in a post-fight interview following his win over Diego Brandao, July 2014