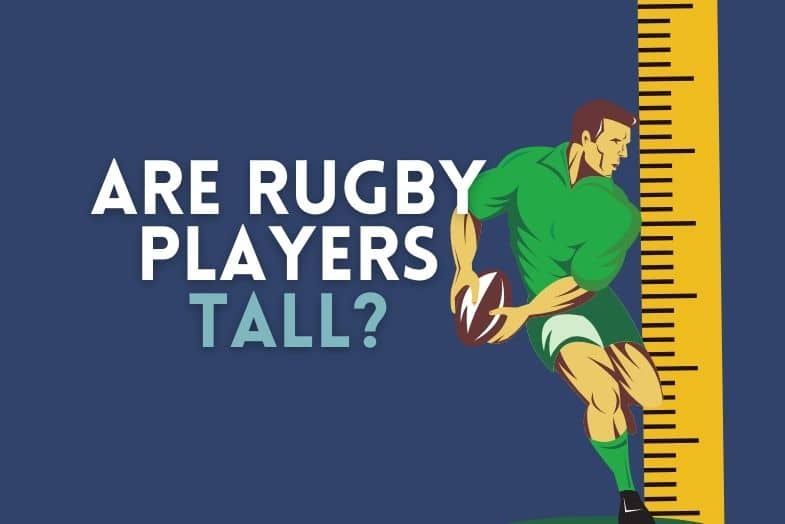 Generally speaking, professional rugby players are taller on average than the man on the street. However, as in many sports, the height of the player depends on the position they play on the field.

Therefore, we need to have a closer look at the role that height plays in rugby, and whether it matters if a player is short or tall.

The majority of a 15-man rugby union team will generally be taller than average. For example, of the 55-man England squad named for the 2020-21 season, only 11 were under 6ft tall, and some only marginally so.

Rugby players come in different sizes, and so do their pay packets. The bigger their standing in the sport the better their pay is, which stands to reason.

Does Height Help in Rugby?

For most positions, height, and indeed weight, is a huge advantage in rugby. Players generally need to be tall and strong given the physical requirements of the sport.

For example, the players in the front row need to be heavy but also have a low centre of gravity in the scrum, and it is thought nowadays that 6ft is the optimum height for these players.

Meanwhile, locks are responsible for securing possession from line-outs, and have to be the tallest players on the field – so much so that they wouldn’t look out of place on an NBA court.

What is the Average Height of a Rugby Player?

Of course, the average height also depends on the position played on the field. There is no point in having a short player as a lock or an extremely tall scrum-half.

On average, a scrum-half is 5ft 9in tall, fly-halves and wingers are 6ft, centres are 6ft 1in, flankers 6ft 3in and locks a huge 6ft 6in.

There is little difference between player heights in rugby union and rugby league, with the average rugby league player also being between 6ft 1in and 6ft 2in.

This was the squad picked by head coach Eddie Jones to play in the final match of the Six Nations against Ireland in March 2021.

Can Rugby Players Be Short?

Rugby players can indeed be short, and many down the years have been – but a lack of height is the exception rather than the rule. Japan’s Fumiaki Tanaka was the shortest player at the last Rugby World Cup in 2019, standing at 5ft 5in.

Tanaka describes his height as an advantage, and it hasn’t stopped him from racking up 75 appearances for his country, and scoring 40 points in the process.

Scrum-half Dan Robson is the shortest player in the current England rugby union squad at 5ft 8in.