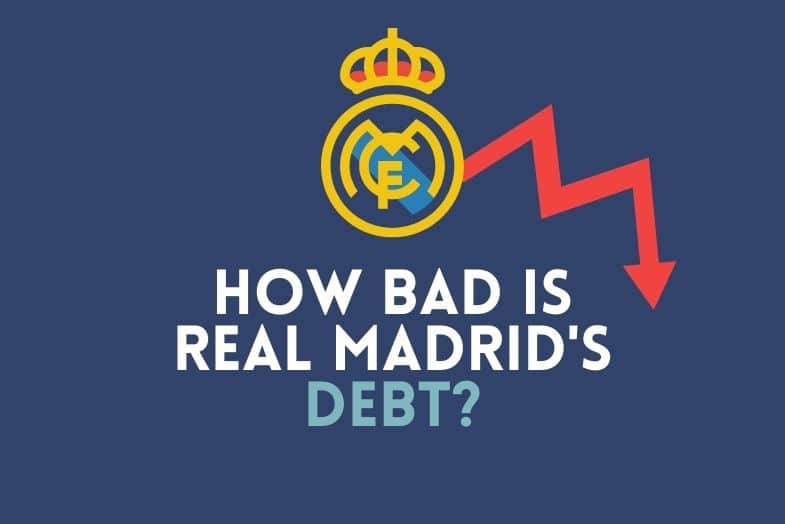 Real Madrid is one of the biggest football clubs in the world, and it has the financial clout to back that up. However, with so many clubs affected by the worldwide pandemic in 2020, debts are rising across major leagues.

While rich, Real Madrid isn’t immune to the impacts of the worldwide economy and also struggled during this time. But is the Spanish club in debt or is it managing to make money?

Let’s explore Real Madrid’s debt levels, if the club is in financial trouble and how could Los Blancos afford to bid for Kylian Mbappe.

How Much Debt Do Real Madrid Have?

The 2020/2021 fiscal summary from Real Madrid does, however, exclude the stadium remodelling project. In 2019, Real Madrid secured a £700 million loan to fund the renovations at the Santiago Bernabeu. All assets considered, Real Madrid claimed a positive financial outlook of £738,394 (874,000 Euros).

Are Real Madrid in Financial Trouble?

In its 2020/2021 financial statement, Real Madrid claimed to have a cash balance of £103 million (€122 million). Those are not the figures of a club in financial trouble. The biggest financial burden facing Real Madrid is the £700 million (€828 million) loan for renovating the Santiago Bernabeu.

When the Real Madrid board takes a look at Barcelona’s financial troubles they may well feel much better about life. According to La Liga, as reported by the Guardian, Real Madrid’s spending limit is eight times that of Barcelona.

Although Real Madrid had a tough year due to revenue losses, caused by the global pandemic, things are beginning to look up. Thanks to salary reductions and player sales, the budget has been balanced at Real Madrid.

It means that unlike Barcelona, who are in financial trouble, Real Madrid can start thinking about player transfers again. In fact, Real Madrid considers itself to have made money during the 2019/20 and 2020/2021 seasons.

How Can Real Madrid Spend So Much?

TV and marketing deals for Real Madrid bring in huge sums of revenue. Real Madrid can keep spending money because those in charge know that more will keep coming in. That’s the advantage being one of the biggest teams in the world brings.

In truth, compared to most football teams, Real Madrid is super-rich. There are only a handful of clubs around the world that can even come close to spending the same as the Spanish outfit.

Madrid’s spending power has helped the Spanish giants create a team of ‘galacticos’ in the past. The likes of David Beckham, Zinedine Zidane, Ronaldo, Roberto Carlos, Raul and Luis Figo all lined up for Madrid in the early 2000s.

It was an expensively assembled squad but despite some on-field success, the galacticos didn’t hit the heights many had expected. Sure, there was a Champions League win in 2002 but with so many stars the expectations were greater than the results. Still, for fans of football, it was a joy to witness so many talented players all on the same side.

The spending power of clubs like PSG and Manchester City has seen something of a return to the galacticos era but both have struggled for success on the continent. It seems that while money buys a lot of things, it doesn’t guarantee success at the highest level without good coaching.

How Can Real Madrid Afford Mbappe?

Thanks to smart management over a number of years, Real Madrid is in a healthy place financially. The club was allocated a spending limit of $650 million for the 2021/2022 season. This figure left plenty of room in the budget for one of the most coveted players in world football, Kylian Mbappe.

While Barcelona was making cuts left, right and centre, Real Madrid decided to make a bid for Kylian Mbappe in the 2021 summer transfer window. It wasn’t just a token bid either, with reports of a £171.7m (€200m) offer. Considering Real Madrid is using poor finances as an argument for joining the much-maligned European Super League, this bid caught some by surprise.

Real Madrid managed to save over £200 million during the 2020/2021 season which supplied the club with the Mbappe money. The Frenchman’s move from PSG to Real Madrid is one of the worst-kept secrets in football due to the player’s love of the club. It seems only a matter of when Mbappe signs for Madrid, not if.

All businesses can go bust but Real Madrid is one of the best-managed football teams around. Prudent decisions by president Florentino Pérez and the huge revenue of Real Madrid almost make the club financially bulletproof. While many teams made losses during the pandemic, Madrid was in the black.

As we have mentioned, the largest debt Real Madrid has to worry about is the £700 million one it took out for stadium repairs. However, while this is a large sum it is to be paid off over the next 30 years so it’s not a huge burden for a club with Madrid’s income levels.

Looking a little closer at how Real Madrid makes its money shows us that revenue streams, while down due to the pandemic, are still healthy. It’s unlikely we will see Madrid ever go bust but the club might have to take a more sensible approach to spending in the future.

This is especially true if the European Super League doesn’t happen and revenues don’t return to pre-pandemic levels.