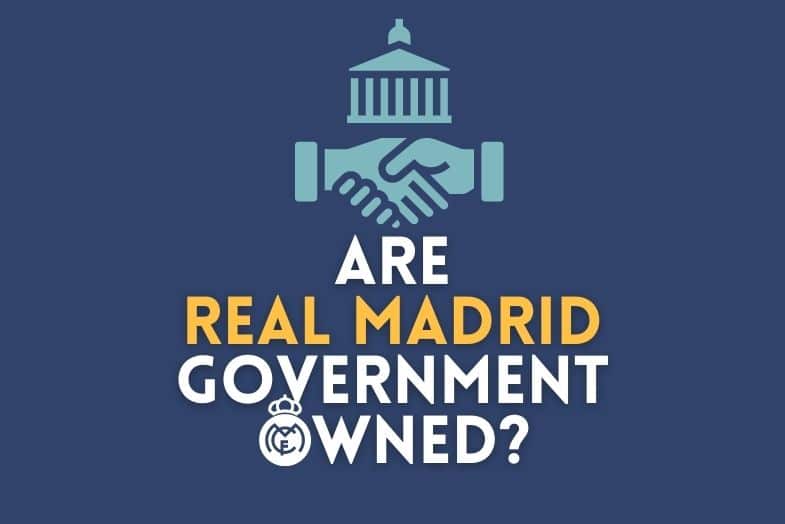 Known by all sports fans as one of the greatest and most successful football clubs in the world, Real Madrid has become a global giant since their forming in 1902 by a group of students in the Spanish capital.

Despite recent struggles, the club is one of the highest generating teams in the history of the sport, with smart decision-making and financial dominance helping build the club to what it is today – a non-profit worth over $4.8 billion.

But who really owns Real Madrid? And are the government involved in a club of this magnitude and wealth?

Join us as we go through the ownership and financial dealings of one of the richest football clubs in the world.

Real Madrid is run by members known as ‘socios’ who pay an annual membership to the club to receive benefits such as the right to vote on club-related issues and greater accessibility to tickets compared to regular supporters.

The members vote for a President to lead them and the club, representing Real Madrid’s interests as a whole. Florentino Perez is the current President of Real Madrid, having been in and out of the position since the year 2000.

A rare case in the footballing world, since being founded in 1902, Los Blancos has been owned and run by its members following the creation of the club by a group of students in Madrid. The club is arguably the highest-ranking member-owned club in the world alongside bitter rivals F.C. Barcelona, who also adopted the ‘socios’ ownership method.

Are Real Madrid Owned by the Government?

As Real Madrid is a non-profit organisation, the club is not owned by the Spanish government. Run by the members and supporters of the club, Madrid has been applauded for its ‘traditional’ method of club management by the footballing world, with other top European leagues attempting to follow suit.

The German Bundesliga is the most recent example, with European giants Borussia Dortmund and RB Leipzig adopting the 50+1 rule, a method of ownership where the club is owned by 51 percent members such as Madrid and the other 49 percent by stakeholders.

This method of ownership allows shares of the clubs to be traded on the stock market, further boosting its economical presence across the world.

Understanding why ‘Real’ is a common nickname in Spain is a reason why some assume Madrid is state-funded. ‘Real’ stands for ‘royal’ so many make the mistake in thinking Madrid is owned by the government or royalty.

Where Do Real Madrid Get Their Money From?

As a private company, Real Madrid C.F. is the governing entity of the non-profit which is supported financially by more than 100,000 club members.

Real Madrid generates income in other areas, with 25 percent of its revenue coming from ticket sales, 38 percent coming from marketing deals, and 36 percent from television agreements.

Madrid’s reputation as one of the greatest football clubs in the world has helped build its brand image immensely, with television networks offering multi-million pound deals to access the rights to broadcast the club’s games across the world.

Los Blancos and bitter rivals F.C. Barcelona dominate the broadcasting revenues with 20 percent of La Liga’s television income going to the two Spanish giants. This revenue sees both clubs earn up to €150 million, an addition to the €700 million-plus that the club generates per year. It allows them to dwarf almost every other team in La Liga’s salary cap.

With this reputation, it is hardly surprising to see that Real Madrid generates an incredible percentage of its revenue through gate receipts, with the club having the third-highest average stadium attendance in Europe.