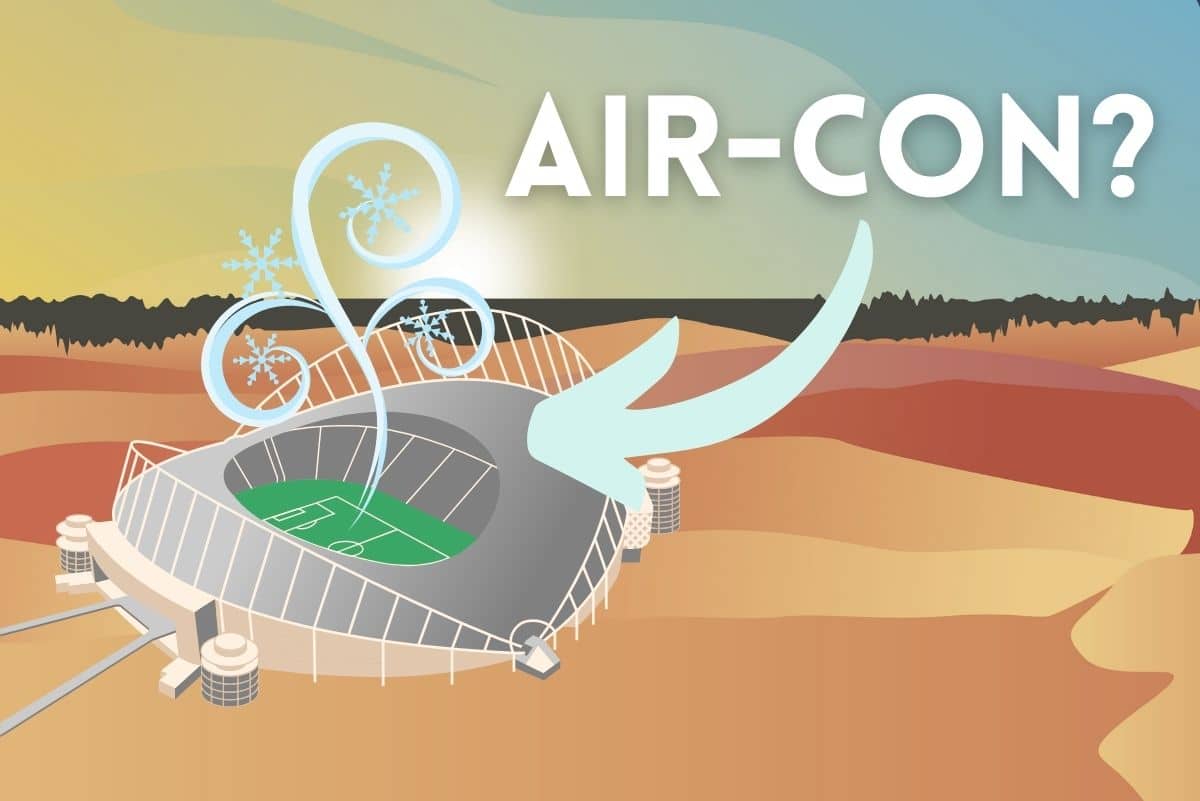 For the first time in the tournament’s glorious history, the FIFA World Cup will be held in the Middle East, as Qatar prepares to host the 22nd edition.

But as we know, the gulf region’s hot climate forced the organizers to move the tournament from its traditional summer timing to an unusual first kick-off on November 21. But is it enough to avoid the unforgiving elements of the desert?

Apparently not, which is why the Arabic nation had to take further measures while building the eight stadiums that will host the event, adopting new technologies that should provide players and fans alike with a cooler atmosphere.

So how will Qatar cool their stadiums? What will the temperatures be like inside the venues? And are the World Cup stadiums indoors?

Time to reveal the answers.

The World Cup stadiums in Qatar are considered outdoor venues rather than indoor. However, the designs of these grounds include additional features that are hardly found in the typical outdoor stadium.

According to Dezeen.com, Al Bayt Stadium in the city of Al Khor has adopted a tent-like design as a tribute for the nation’s nomadic culture, but at the same time, as a mean to ease down the heat inside the venue, thanks to the shade provided by the “tent”.

Are the Stadiums in Qatar Air-Conditioned?

The short answer is yes. All eight World Cup stadiums in Qatar have implemented a certain cooling system – including the intriguing Ras Abu Aboud Stadium – even if it doesn’t operate as a conventional air-conditioning system.

The main idea is to create a bubble inside the stadium that shields the players and their supporters from the heat outside using a system powered by solar energy.

As we mentioned in an earlier study, the average temperature in Qatar during the month of November is 25 °C (77 °F). But thanks to the complex cooling system, players and fans will be kept at at 21º Celsius (70 °F) while within the bubble created inside the stadium.

Naturally, these numbers will vary based on the day and the timing of each fixture. Nonetheless, it appears that the organizers are confident in their ability to partially control the climate inside the stadiums by significantly lowering the temperatures, which would provide a considerably better experience for players and fans alike.

How Will Qatar Cool Stadiums?

The organisers of Qatar 2022 will use an advanced air-conditioning system to lower the temperatures inside the World Cup stadiums. The idea is to create a bubble that includes the players as well as the crowd in attendance in a system powered by solar energy.

Saud Abdulaziz Abdul Ghani, understandably nicknamed “Dr Cool”, is the main architect behind the whole phenomena. The engineering professor claims that the players will enjoy their best ever experience on a football pitch thanks to the cooling system, which will even prevent injuries, heat-related illnesses and allergic problems.

As explained by thenationalnews.com, jets will be blasting air at the pitch side and under spectators’ seats to keep them cool, while sensors will maintain a consistent temperature inside the stadium and even adjust air flows.

The rising air will be sucked back into the stadium’s cooling system, after being cleaned by water kept at circa 7º Celsius and pumped out again by the jets.