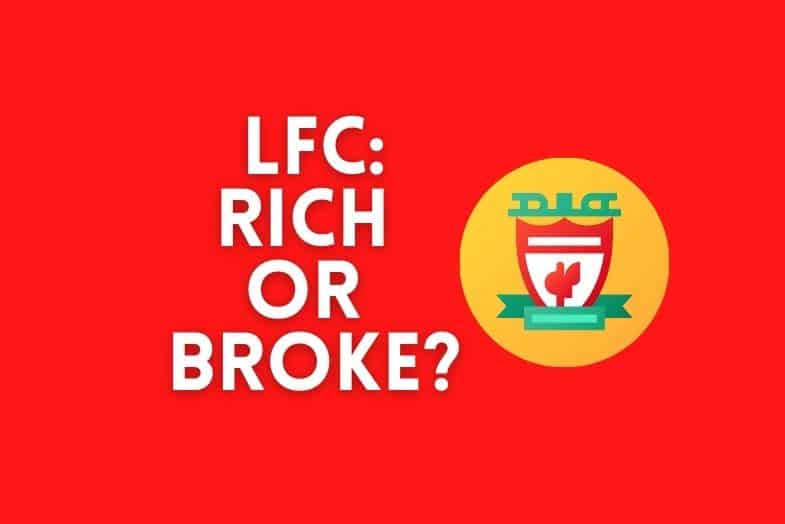 Liverpool was a football club on its knees before Fenway Sports Group (FSG) completed its takeover in 2010. Since then, Liverpool’s fortunes have changed for the better on and off the field.

Under FSG, Liverpool would seek to find diamonds in the rough and turn them into world-beaters in front of the Anfield fans. Uncut gems like Mohammed Salah, Sadio Mane and Andrew Robertson have been integral to Liverpool’s on-field success.

In search of silverware, however, FSG has gone further away from its approach by spending big on key players. Stars like Virgil Van Dijk, Alisson and Fabinho were all brought in for large sums of money.

But has the investment been worth it? Is Liverpool now in debt and, if so, what are the potential financial dangers?

Is Liverpool a Rich Club?

According to a report by Forbes, Liverpool is the fifth most valuable football team in the world. The club is valued at approximately £2.98 billion in the report, with a debt value of 2%. As far as rich clubs go, there aren’t many in the world with more value than Liverpool F.C.

To keep up with their wealthier rivals, Liverpool’s owners have had to get creative. Fans of the Merseyside club will have noted that FSG sold 10% of the club to RedBird Capital Partners for £533m in 2021.

This sale allowed Liverpool to continue with Anfield’s redevelopment plans and reduce the financial impact of the pandemic.

Since FSG bought Liverpool in 2010 the club’s finances improved each year until Covid hit. John Henry’s acquisition has seen Liverpool reap the benefits of increased broadcasting and commercial income. Thanks to an expanded Anfield, Liverpool also improved matchday income considerably since 2010.

Liverpool fans may be disappointed in the level of investment from FSG but there is no denying the club is being run in a financially secure way.

Despite the commercial success, it’s clear from Liverpool’s transfer history the club does everything possible to balance the books. For instance, those large sums of money spent on key players were largely funded from player sales. Chiefly, the sale of Philippe Coutinho to Barcelona for an estimated £135m.

FSG operates using the ‘Moneyball’ principle; a data-driven approach to running a sports team. When it comes to player acquisitions, the Moneyball approach is to buy low and sell high. That means finding players that represent good market value, both in price and potential.

The financial inequality gap continues to grow, however, even among the elite clubs. All clubs like Liverpool can do to remain competitive on the pitch is to carry on finding value in players overlooked by the big spenders. Then, when the time comes, hold out for as high a transfer fee as possible.

Player sales like Rhian Brewster to Sheffield United for £23.5m and Dominic Solanke to Bournemouth for £19m are regarded as masterstrokes.

Are Liverpool in Debt?

Liverpool’s financial resources began to run dry following the pandemic but wages and financial commitments needed to be honoured. To pay off those commitments Liverpool chose to take on debt in the form of a £197m loan.

Debt in this manner only becomes an issue for a club if they are no longer capable of servicing it. Before the pandemic, Liverpool had announced it was running at a profit. That suggests that when revenues return to pre-pandemic levels Liverpool’s debt will be paid off and forgotten about.

However, not all clubs generate as much revenue as Liverpool does and it is a cause for concern across world football.

When FSG bought Liverpool it was saddled with debt and close to administration. However, FSG managed to swoop in and save the day with the £300m acquisition.

Liverpool hadn’t won a league title in over two decades and many fans felt hope for a new way of their beloved club operating. Since the takeover, Liverpool returned to the summit of the top division in England while securing further European success. Not all clubs will be fortunate enough to be saved from the brink with so many triumphs along the way.

How Much Debt Does Liverpool Have?

Liverpool’s current debt is estimated to stand at £386m. This figure is a total debt for the club using financial figures from 2020. When it comes to Premier League club debt, Liverpool ranks highly. This might explain why the club was so eager to join the ill-fated European Super League.

According to a 2021 report by Deloitte, the top 20 richest football clubs generated 12% less revenue during the 2019/2020 season. A large chunk of that reduction was the loss of match-going fans in the pandemic.

Deloitte’s report found a £218m fall in revenue due to missing fans reduced revenue for top teams by 17%. That loss was made worse as fans were not permitted to attend most Premier League games of the 2020/2021 season.

Are Liverpool FC in Financial Trouble?

Unless a club is super rich, it’s necessary to run with a certain level of debt. While Liverpool’s debt figures are alarming to onlookers, the club is run in such a way that the debt is relatively low risk. FSG’s frugal approach to spending means the long term safety of the club is not at risk.

Football clubs running at a deficit isn’t something new. While they are businesses, they don’t typically run in the same way as your average company.

Income for football clubs is limited to how much revenue they make from things like ticket sales, commercial sponsorship and competition prize money. For instance, there is only so much money clubs can make from ticket sales. Due to the limited capacities at football grounds, only a certain number of fans get tickets.

Even though Liverpool could sell out Anfield ten times over for most home games, only 53,000 will be singing “You’ll Never Walk Alone” together.

In many other business models, supply and demand is in full force and the company could simply make more of its product. When it comes to football, however, teams can’t magically put more seats in their stadiums.

While costs commonly spiral out of control at football clubs, Liverpool’s owners are doing everything they can to run a sustainable model. That might mean missing out on a few transfer targets from time to time but overall the club is in a healthy situation.

In April 2021, Liverpool announced its financial results for the year to May 31, 2020. Those results indicated that revenue almost entirely across the board was down significantly. With the Covid pandemic affecting just the last three months of the 2019/2020 season, Liverpool’s overall revenue was down by £43m.

These losses will have continued to grow during the following season where grounds did not permit fans for most of the games. Liverpool, like most football clubs, will begin trying to recoup pandemic losses as fans begin arriving at grounds once more for the 2021/2022 season.