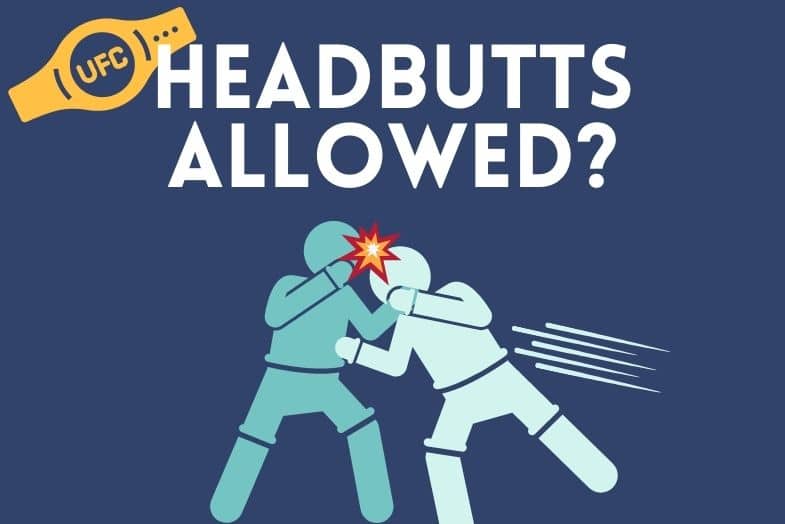 Despite the sport’s ever-growing popularity, mixed martial arts is still regarded as some sort of a no-holds-barred type of combat by some of the its detractors. Former US presidential candidate John McCain once famously labelled MMA as “human cockfighting”.

Whilst this derogatory description may have been more or less accurate once upon a time, the current form of MMA is far from being a sub-human form of combat.

Today, the sport is governed by specific laws and regulations aimed to ensure the fighters’ safety, first and foremost. These rules include banning a host of strikes and manoeuvres which are considered to be specifically dangerous.

But what about headbutting? Is it currently allowed in UFC? And what was the case during the earlier stages of MMA’s development? Let’s find out.

Are Headbutts Allowed in UFC?

Headbutting is absolutely prohibited in the Ultimate Fighting Championship. In fact, the Nevada Athletic Commission (which is considered to be the main commission that regulates a large percentage of UFC events) put headbutts first on the list of the acts that are considered as fouls.

As explained in another article about UFC rules and regulations, a deliberate headbutt often results in the deduction of one or more points for the fighter.

That’s the case when their opponent is still able to continue the fight. If not, the headbutt could result in disqualification, with the opponent being announced as the bout’s winner. Surely an anti-climatic way to end a fight.

But if the headbutting is judged to be accidental, then the fight could be declared as a no-contest if the opponent is unable to continue.

Why is Headbutting Illegal in UFC?

Headbutting is illegal in UFC because it’s considered to be too dangerous of a manoeuvre, especially when it results in a clash of heads. It can easily result in a head trauma or concussion.

But, according to long-time MMA referee John McCarthy, headbutting was abolished from the UFC’s original rules after the organisation was taken off cable.

The person who made the decision felt that the UFC should take a page out of boxing’s book and ban headbutts in order to be accepted by the public.

So besides the health concerns that could result from the move, prohibiting headbutts had to be done in a series of decisions aimed towards changing MMA’s cruel reputation and allow it to gain popularity on a wider scale.

Has Headbutting Ever Been Allowed in MMA?

During the early days of the sport, most MMA organizations had very few rules, and thus, headbutting was allowed. Some of the original UFC fighters, who are now considered as pioneers of the sport, had repeatedly used headbutts as an easy and effective way to win fights.

We’re talking about the likes of Mark Coleman (the first ever UFC heavyweight champion) and Todd Medina.

When Did Headbutting Get Banned in UFC?

Headbutting became banned from the Ultimate Fighting Championship starting UFC 15, which took place in Mississippi on the 17th of October 1997.

Todd Medina takes credit for the headbutt’s rise in popularity following his fights in UFC 5. He claims that the move became popular in Russia, Japan and Brazil, but fighters began to get seriously injured, so it was banned after UFC 6.

However, UFC 15 is generally considered as the first event where headbutting was banned by the global organization.