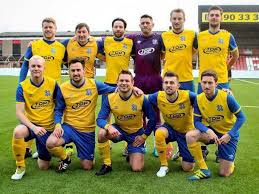 From an idea formed in a YouTuber’s bedroom to a reality on grass, Hashtag United are among the most unique clubs in the entire English football pyramid.

Who Are Hashtag United?

Hashtag United are a football club formed in March 2016 by Spencer Owen, a YouTuber who has raised more than £200,000 for charity, also created the charity tournament the Wembley Cup, and whose YouTube channel, Spencer FC, boasts almost two million subscribers.

They began as a club playing friendly matches against such sides as a Comedians XI, the GB Deaf team, and Manchester City staff members, and won the aforementioned Wembley Cup in 2017, before joining the English football league system ahead of the 2018-19 campaign.

‘The Tags’ moved to the Len Salmon Stadium in Pitsea, whose capacity exceeds 2,500, for the start of the 2020-21 season, having previously shared Haringey Borough’s ground before playing at Tilbury FC’s Chadfields stadium in 2019-20.

Their primary colours are yellow and blue.

They also have their own women’s team who play in the FA Women’s National League – the fourth tier – an eSports team, and their own youth and development sides.

What Level Do Hashtag United Play At?

Again, given their meteoric rise in just four years of existence, this could change by the time you read it, but in 2020-21, Hashtag United are competing in the 18-team Essex Senior Football League, the ninth level of English football.

The club were champions of the tenth tier, the Eastern Counties League Division One South, in their first year of competitive football, and were on course for a second successive promotion in 2019-20 before the abandonment of the season due to the coronavirus pandemic.

At the time, they were one point behind leaders Saffron Walden Town with three games in hand, and a monstrous goal difference of +63 and 90 goals scored in their 26 league games.

Are Hashtag United in the FA Cup?

Of course, given they play competitive football in England, Hashtag United also enter the FA Cup, and won their second qualifying round tie on September 21, coming from behind to beat Soham Town Rangers on penalties.

Who Plays for Hashtag United?

Are Hashtag United Players All YouTubers?

Not at all. Current players for Hashtag United include non-league regulars Simon Peddie, 38, and ‘scariest man in football’ Jamie Jackson, 42, for instance. Many others are just part-time footballers, as is the case with most players at their level of the game.

One former player of Hashtag’s even turned professional in midfielder Scott Pollock, who won man of the match as a 17-year-old at their triumphant 2017 Wembley Cup clash with Tekkers Town before signing a two-year scholarship with Northampton Town in September 2018. As of June 2020, Pollock has made 23 first team appearances for Northampton.

Some squad members have been YouTubers, though; between them, former players Charlie Morley, Jemel Akeem and Theo Baker boast more than one million subscribers.

Do Hashtag United Players Get Paid?

The footballers don’t get paid, but their eSports team, who play the video game FIFA professionally and are ranked among the best in the world at it, are paid.

Speaking to The Guardian in January 2019, Owen said: “Our football side are at the bottom of the ladder trying to get up and our eSports guys are at the top, competing with Man City, PSG, and often winning those battles.”

At least more so than the average ninth-tier English football club, it would seem. They boast contracts with Adidas as their kit suppliers and Football Manager as their shirt sponsors, with the latter even releasing a free version of the computer game with all teams in Hashtag’s league made playable.

Umbro had formerly made their yellow-and-blue kits, while previous shirt sponsors include EE and Top Eleven.

Owen, who was manager before stepping down following their entrance into the football pyramid, still acts as co-owner, chairman and commercial director of the club. Hashtag’s own YouTube channel has more than 500,00 subscribers

Could Hashtag United Play in the Premier League One Day?

Given the more unique in which they came about, there may always be sneering ‘Is Hashtag United a real team?’ questions, never mind debates about ‘Can Hashtag United play in the Premier League?’

But, realistic or not, it’s clearly an aim.

“Amazing to think where we’ve come in the last three years,” said Owen after promotion in April 2019.

“Just imagine where we could be in a few more? After all, it was imagining that got us here in the first place.”

With their online audience and growing status in the non-league game, it would be naive to rule out the possibility of this ninth-tier club one day sitting at England’s top table. Just don’t expect everyone to take to it too kindly if it ever does happen, though.